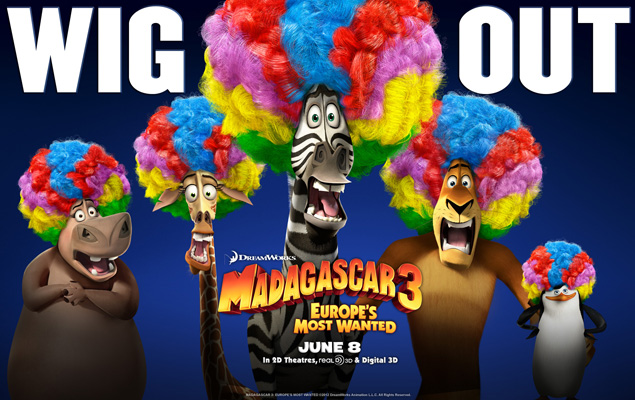 “Madagascar 3: Europe’s Most Wanted” in 3D, directed by Eric Darnell, Tom McGrath, and Conrad Vernon is another exciting adventure that had to be taken-on by the penguins! Waiting to begin this adventure is the whole gang- Alex (Ben Stiller), Marty (Chris Rock), Melman (David Schwimmer) and Gloria (Jada Pinkett Smith)! But Africa is only where they began! 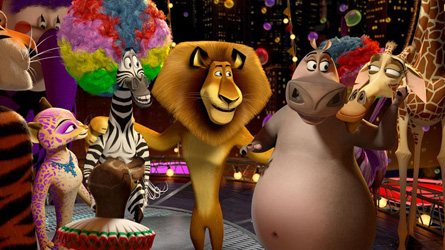 The characters travel to so many different places including Rome and London. The foursome’s goal is to make it back to New York but not realizing how. The penguins are the master minds behind building a plane to get them there but they end-up crash landing in France where they meet French animal control agent Captain Chantel Dubois (Frances McDormand) a nemesis so mean, so terrifying, so evil and still extraordinarily good in hunting who wants Alex’s head for her wall. This wall is filled with every animal one can imagine including a special placeholder just for a Lion’s(Alex’s) head!

To save their lives and to escape the anarchy the gang is forced to join the circus where the fun and excitement begins. After making the circus 200 times better than what it was before they joined, this rambunctious group get a contract to preform in New York City! This adventure that they were seeking in returning home, takes them on another adventure! Watch what happens with this animal crew in their great efforts to make their way back to New York.

Throughout their journey, they learn things and begin to help others learn as well. The movie has great lessons about passion and not giving up. It has beautiful colorful settings and scenes, cheap laughs but wonderful characters and great songs! “Madagascar 3: Europe’s Most Wanted” having three directors, is not a case of too many cooks in the kitchen. It is the best and most entertaining out of the previous two movies. All in all Madagascar 3 in 3D is definitely a must see for the summer and every child should enjoy the experiences of the Afro Circus!