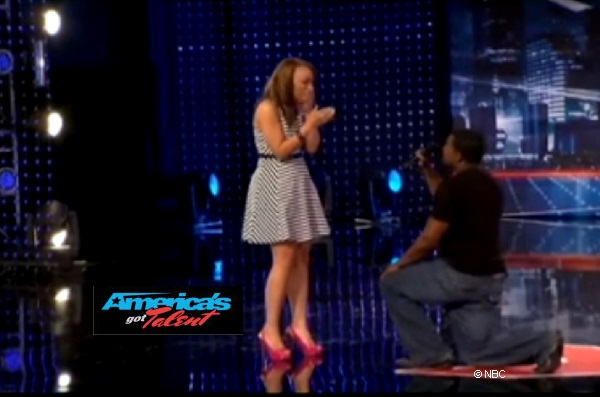 This week’s auditions on America’s largest talent stage, NBC’s “America’s Got Talent” brought out a lot of risk-takers and original artists in the cities of San Antonio and New Orleans. From an escape artist to pre-teen dancing duos!  There were even two contestants who put their hearts on their sleeves while performing their acts and getting emotional from their troubled upbringings. 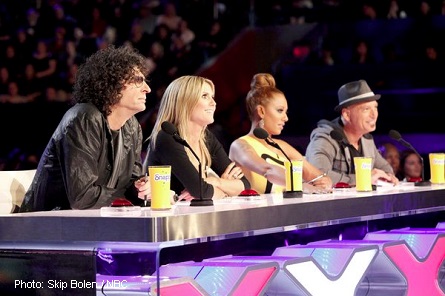 After his performance, Howie asked, “Are you sure you didn’t swallow Jackie Evancho?” Howard said, “This is the most outrageous audition I’ve seen. You are a freak, but I mean it in a good way.” Heidi said, “It was perfection!”

Travis brought his girlfriend on stage. “This is a song I sing around the house” he said. He also told the judges about his girlfriend, “I have loved her since the first moment I laid eyes on her.” They’ve been together for five years. His girlfriend said to the judges, this is special, don’t you think everyone should hear this? Travis then proposed marriage to her on stage.

The judges said, “Thank you for this moment with use. We want to share a moment with you. It’s one big giant ‘yes!’

Watch Travis Pratt’s proposal in the video below:

Rubio was in “The Untouchables” dance group who were on AGT last season. After the young duo (twelve years old) danced, Heidi said, “Usually the girl is better than the boy. But you were just as good!” Howard said, “the precision is quiet remarkable.” Howie reacted with, “This is the bar, you two have set it! I don’t think there was one mistake.” 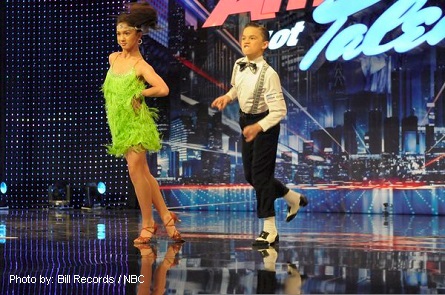 D’Angelo is Rubio’s brother and he was also in The Untouchables. The young twelve year old D’Angelo danced with his thirteen year old partner Amanda who is also an ex-girlfriend. He said that they have broken-up four times since he was nine years old. But, he still likes her. Amanda said there is no chance that they will get back together.

After their act, Howard said, “This is why I came to San Antonio was to see you two!” Mel B. said, “I was thoroughly entertained!” Heidi reacted with, “I love the humor in your dance and your expression.” Howie said he thought they were “fantastic”, and Howard said, “I’m so excited I’m going to see you compete with your sister!”

This band was formed when one of the members said he needed extra money to provide for his family. When the band came onto the stage, Howard told them, “I am not a Mariachi lover. I’m telling you up front.” The responded with, “We are here today to win you over.”

This Mariachi band had a very unique style that mixed pop song “I’m Sexy and I Know It” with their traditional Mariachi music.

After their performance, the judges reacted positively. Mel B. said, “I thought it was so much fun the mixture was great.” Heidi said, “I didn’t know what to expect. I knew you were going to put a twist on it but didn’t know.” Howie was very pleased with the band that let him prove a point to Howard. “My whole mission today was to get Howard to buy into Mariachi. Then you came onto stage and I thinking you have completed my mission.”

In the judges voting, they all said “si”, or “yes”. After they left the stage, “Howard said, “You know I don’t like Mariachi. But what we say to every contestant is that you have to do something different. Something outrageous and they did!”

Collins is sixteen years old and blew the judges away with his act. He got emotional after he performed his trick and was crying. Mel said, “I don’t know how you did it and I want to see more.” Howard said, “Your trick was flawless. You’re emotional aren’t you? Have you suffered a lot. Today you proved something. You’ve got the goods. For 16 years old, you’re quite remarkable” Howie said, ” believe at 16 years old, you have just stepped sir into your future.”

The judges said about Collins, “He did an illusion that I don’t think any of us could figure out or ever saw before.” 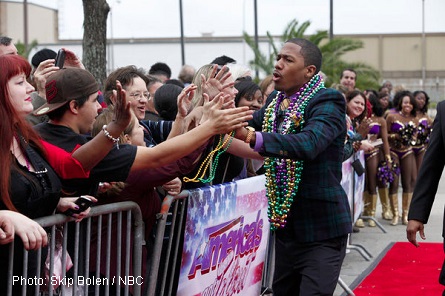 Contestant Megan Pyfus is probably hoping to follow the footsteps of AGT season one winner Terry Factor who is ventriloquist now performing in Las Vegas. At only twenty years old, she said she started the art because she had trouble being so shy. From Nashville, Megan tried-out for AGT and said before her audition, “This is really life- changing. I see all my dreams coming true tonight.”

Megan sang Whitney Houston song “Saving All My Love” via her two very big puppets! After her performance, Howie said, “I think you have star quality.” Howard stated, “I don’t think people know how hard that is. You have an incredible singing voice. I’m a big, big fan.” Mel B. reacted with, “Stunning you are amazingly talented You have an incredible range from Opera to Pop.” Heidi said, “You are what this show is all about.”

Jonathan who said he is unemployed was kicked out of his parent’s house for being gay on his 18th birthday. He said, “In my darkest moments, I can escape through music. I want them (parents) to see what I’ve done with my life. I’m not a bad person.” After he told the judges this, Howard said, “Not only for us but for them. Show us what you’ve got. Show them!”

The judges welcomed him with open arms after his performance. “You seem like a good person, and you have talent. With your talent, this show has become your family. We love you,we accept you and we’re so proud that you came here tonight,” said Howie. Howard said, “What a wonderful son you have. What a gift you have.” Heidi said, “I’m in love with you! You are amazing!” Mel B. said “I was fortunate to sing with Luciano Pavarotti. He would be proud of you. Well done of you to stand there and be confident in yourself.”

After Jonathan left the stage, Mel B. said, “you weren’t expecting that voice to come out!” Heidi said, “Jonathan is a jewel. I loved it!” 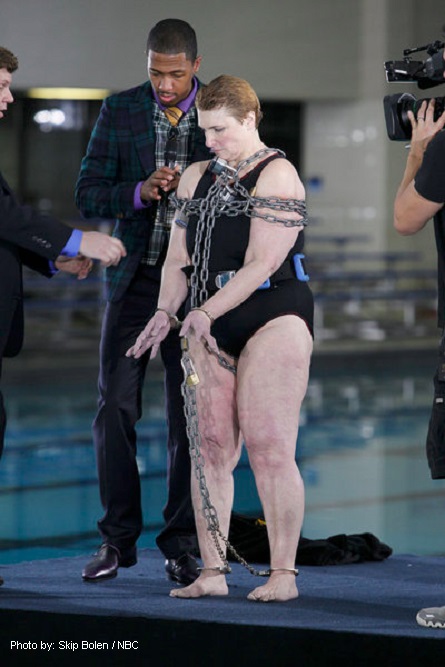 Alexandria the Great said she is one of a handful of women in the world that’s an escape artist. Her husband is part of the act. Her hands and feet were shackled hands and and 30 foot chain was wrapped around her body that was secured with eight padlocks.

Mel B. told her after Alexandria the Great was successful that “I couldn’t even begin to hold my breath because I was nervous for you, and that makes good television!” All the judges voted “yes.” Heidi said, “That is a difficult act to follow.”

Starbright is a Computer programer. He wrote a song specially for AGT. HE said he sees himself as the next Lady Gaga.
He brought out his “portable recording studio” so the judges could hear it the same way as if they were seated in the sound booth. Within seconds, He got “X”from Howard…then Mel B. Soon Howard pushed Heidi’s hand on her buzzer. Then Howie was the last judge to “X” Starbright.

“You forgetting the words of the song that you wrote!” Howie exclaimed to the act. Heidi said, “Sorry, it’s a no.” Howard followed, “It’s a no for me.”

Shawn is a lawn mower repairman. His act was him climbing up an 80 foot pole to the very top of a very flimsy platform to so a handstand in the windy weather.

During his attempt, Howard said, “he’s insane” Nick said, “I don’t want to watch. I can’t watch this”. After Shawn was successful, Howie reacted with, “That seemed like the most dangerous thing I ever saw, The fact that there’s wind, no net and up an an 80 foot pole.” Heidi asked, “What happens when you fall?” He responded with “I make it so my son’s not an orphan.”

Howard said, “That’s good theater, that’s good television. Bring on the accidents!” Mel B. said, “I didn’t know what was going to happen. I liked it!” Howard was still enthused and said, “It’s a definite ‘yes’ for me. We need you on this show. People need danger.” Shawn received additional ‘yes’s’ from the other three judges.

Thomas is an eighteen-year-old guitar player. He said his parents were alcoholics and his mom was a drug addict. “Music was a way I could cope with my feelings,” he said.

He sang an original song titled, “My Life”. He said the song, “its for my dad. He changed his life around for me”. Thomas said his eventually his dad got help and stopped drinking in order to take care of him.

Heidi said about Thomas, “All I have to say is John Mayer better watch out. You have an amazing voice!” Howard said, “You are absolutely an emotional person. You brought that to the stage. I think yo you have star power. I have high hopes for you in this competition!”

Howie said, “When you reach that peak, you feel it. You have just hit the peak!” Mel B. said, “I think you just touched not only me, but all of America”.

“America’s Got Talent” will visit Chicago next week in the hunt to find this year’s super-star!   Watch Tuesdays 9-11 pm ET on NBC.