A game show with physical challenges on a circular stage called “Minute to Win It” has become a major game show hit for NBC network. Host, Guy Fieri stated at Friday’s taping that his friend told him he was now “in” (referring to his Hollywood status) due to the cartoon version of himself on a recent “South Park” episode: http://www.southparkstudios.com/full-episodes/s14e14-creme-fraiche

It was no surprise when NBC made a call to producers of the show to pull together some last minute holiday-themed episodes that will begin airing on Tuesday December 7th.

SPOILER ALERT! SPOILER ALERT! SPOILER ALERT!
“Minute to Win It”, hosted by celebrity chef Guy Fieri wrapped those Christmas shows just last Friday, November 19th. Audiences were treated to a fun holiday atmosphere with beautiful “Santa Helpers” models, one of which was a “Deal or No Deal” case model, on-stage assisting with prizes and cheering-on contestants. Studio audiences walked with cool gifts – “Despicable Me” DVD, and a Wii “Minute to Win It” game autographed by Guy Fieri. 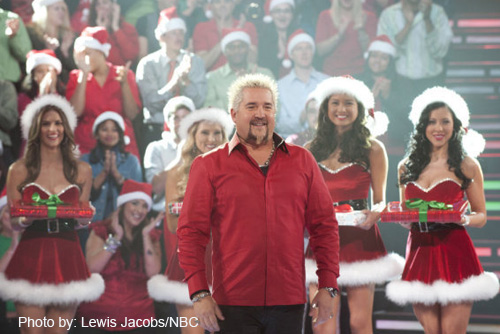 Contestants played in twos. They included teams of: girlfriend/boyfriend; best friends; mother/daughter. Special holiday game-plays that they were able to win as added bonuses were: 1) flat screen television, 2) extra life, and 3) ten extra seconds. Oh yeah, and instead of $1 million as the grand prize it is $3 million for the holiday shows.

MINUTE TO WIN IT holiday episodes video promo below:

Viewers will get yet another treat of a real marriage proposal on-stage. The show’s third one! One of our reporters on-set stated that due to the show’s new updated stage (it now has animated lights) a duo’s game had to be stopped and re-started because the cracks in the stage floor, where the sixty-second circle is, was causing for an un-level surface and deterring a ball in the game.

A two woman team also had to have their game restarted when they got a malfunctioning Slinky which was caused by the Slinky’s warped rings.

A lot of new games were introduced and combined with some old ones. Some of the challenges were: Nice Build – two players have to stack paper reams into a pyramid without falling; Noodling Around – one player must pick-up six pieces of macaroni pasta with one spaghetti raw noodle; Maze Craze – one player must navigate a marble in a maze atop a board. The maze consists of rubber bands and screws. The marble must make its way to the end of the board; The Rebound has two players – one hitting the ball to the others clipboard and aiming it into a basket; Spoon Frog has two players who must each score flipping a spoon into a drinking glass twice.

Fieri stated that after the “South Park” recreation of himself, all he needs now is to host “Saturday Night Live” and he’ll be able to retire happily. Well Fieri, you’re in the NBC family now, maybe they will heed your wish. Online campaign anyone?