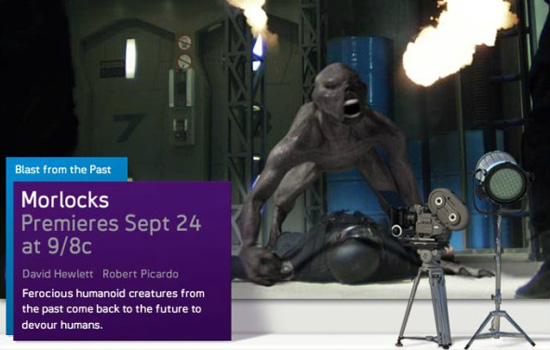 The time traveling device created by a scientist (David Hewlett) in the film, transports people into a desolate future overrun by lethal humanoids, called “Morlocks”. In the process, the Morlocks discover how they can time travel themselves into the present day and creating a race against time between humans vs. humanoids.

In a phone interview with Hewlett and Picardo, they explained that the hook of the film that will make viewers want to tune-in is because it’s based on the H.G. Wells classic novel and it’s about “fearsome creatures created from the classic novel years ago. People will be interested in seeing the story about these future creatures reduced from a toxic society or natural selection in the future”. They also stated, “It’s a little bit like what is happening in our political discourse at the moment”.

Hewlett and Picardo explained the premise of the story as being about a time machine that creates an unstable vortex and things from the other time period are falling through into our time period and that’s where the Morlocks come from. The other creatures besides the Morlocks are mutated creatures that look part dinosaur and part giant chicken. They explained these to come about since it is Earth in the far future a lot of creatures have mutated. That’s where the Morlocks came from as well as these other creatures that Hewlett calls “evil chickens”.

Hewlett explained the way the time machine worked to make time travel possible in the movie is by using a latch. He stated, “we’re using a mechanism called the latch, which basically opens the rift.” When the rift goes missing, they have to retrieve it, otherwise, as Hewlett describes, it’s not functioning properly, opening erratically and causing chaos. “The latch is the key and what my character invented” who thought it didn’t work. However, he discovers that it did work and is being used for evil purposes by Picardo’s character, “Wichita”.

Both actors stated that they enjoyed working together again on the project. They were both previously on Stargate: Atlantis. David Hewlett was cast first in “Morlocks”. When producers came to Picardo with it, Picardo said that he was excited to find out he’d be working with Hewlett.

“My big thing is always humor. I never liked science fiction that took itself too seriously because I think there’s a danger there of getting a bit melodramatic and I think you can lose people there” said Hewlett. Picardo stated that he had fun playing such a macho character. “If you’re looking at my other major science fiction roles, the doctor on Star Trek, and certainly Woolsey on Stargate, I often play characters that might be good theorists and good thinkers, but you wouldn’t call either of them very macho characters”.

“Morlocks” premieres this Saturday, September 24, at 9PM (ET/PT) on Syfy.