The red carpet will be rolled-out later today at the “El Capitan Theatre” in Hollywood to greet the stars during the premiere of Disney movie “Race to Witch Mountain”.

Not quite a remake according to writer and director, Andy Fickman’s interview with “dread central.com”, but a depiction of “what this world would be like thirty years later”. after the “Escape to Witch Mountain”, and “Return From Witch Mountain” films. Both movies made in the mid 1970’s.

The story is set in modern-day Las Vegas where the film’s star, Dwayne Johnson (a.k.a., “The Rock”) is an ex-con working as a cab driver, Jack Bruno. His daily life is constantly being interrupted with the harassing of shady loan shark thugs. Soon added-on to this, a group of secret service men also closely following his actions, once he becomes involved with the escapades of two aliens disguised as children who enter his cab and life with $15,000 in conquest of a mysterious desert location “Witch Mountain” – code name for a secret government installation of a military industrial complex. More or less, like an “Area 51”. 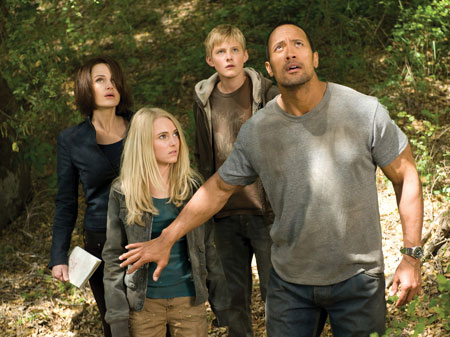 After being reeled-in to the affairs of the children, simply out of concern because they are children, Bruno soon learns that their mission is to retrieve their crashed ship located at “Witch Mountain” in the hands of government officials. Child actors, Anna Sophia Robb (Sara), and Alex Ludwig (Seth) are already building a strong Hollywood resume.

Among all the mix, is also a huge, (bigger than “The Rock”) alien “Predator” looking bounty hunter who is sent to capture the children and their downed space craft.

Some of the best sequences in the movie took place at an Alien Convention in a Las Vegas casino. Here, is where Bruno and the children seek the help of UFO expert, Dr. Alex Friedman, (UFO followers will recognize this name similar to real UFO expert, Stanton Friedman) beautifully played by Carla Gugino (“Spy Kids”) who also becomes the love interest of Bruno. There was great chemistry between these two. UFO geeks, such as myself, will love the cameo by Whitley Strieber (a UFO abductee) in the convention scene.

Other fun cameos and heroic appearances in the film, are made by original child stars from the two previous “Witch Mountain” movies Kim Richards, who plays waitress, Tina, and Ike Eisenmann who is the local Sheriff. Also, Cheech Marin as an auto mechanic.

Dwayne Johnson’s performance and the lines he was given in Race’ made it quite evident I was watching a children’s film. The child actors themselves were very convincing and strong. The special effects were realistic including the space ship, which moved at what us UFO followers believe would be a speed that is faster than the speed of light making it possible to space travel. This is a great children’s movie, which by the way, I noticed the ones in attendance at the screening were glued to the screen, but looses interest for adults with much details and believability lacking.