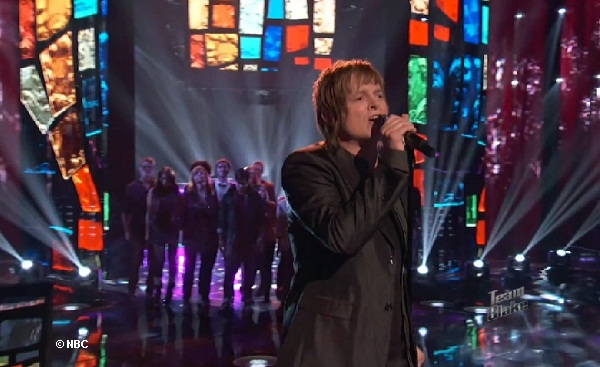 It was a time for togetherness as “The Voice” contestants went back home to visit their families this week. Their families made the trip out to Los Angeles to watch their beloved perform on stage during the live show tonight.

Cee Lo Green and Howie Mandel had some fun as a cross promotion of the premiere of new NBC game show which aired after “The Voice” called “Take It All” – who wore it better? 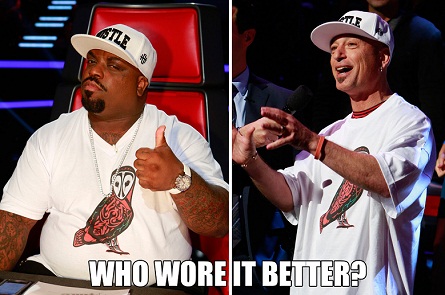 “Take It All” (pictured right) premiered after “The Voice” (left).

Crazy Great!
Trevin Hunte – (Team Cee Lo)
Singing a song dedicated to all the kids at Luthronian Middle School, Trevin sang “Wind Beneath My Winds” by Bette Midler. He was backed by violin instrumentals with live players on stage. Trevin gave another stellar performance this week.

Christina Aguilera said, “That song really took me back. Because when I was starting-out as a seven-year-old singer, I would sing it at every wedding, every competition and talent show. But, I never sang it as crazy great as you did. You just took it whole different level!”

Cee Lo Green said, “We’re at a very important and critical place in this competition. I’ve seen you grow, I’ve seen you progress. I’ve seen you more and more polished and refined and more confident and certain of yourself and these things are the most important to me. It’s just amazingly beautiful your voice is. It’s always a pleasure.”

The Right Thing To Do
Nicholas David – (Team Cee Lo_
He sang “You Are So Beautiful” by Joe Cocker. Nicholas dedicated this song to his family who were seated in the audience.

Adam said, “You’re just one of the most soulful people I’ve ever met. I like you.”
Cee Lo – “You look very handsome tonight sir..I know we had some difference in what direction to take. It was the right thing to do. It was so heart-felt, so beautiful. We share your success, your trail your errors. We are your family. We’re with you.”

Christina – “Cassadee you know that I’m a fan. Sometimes your voice sounds so right on that you almost sound auto-tuned because it’s so perfect and you’re on point. And it’s something that kind of blows me away about you.
There are a lot of artists out there who could only wish they could do live what they do on records. It’s what you do live. The passion you evoke brings your lyrics to life. I believe in you. Blake you have a true super- star on your hands.”

Blake – “The reason that Cassadee’s done a hand full of country songs is that she has the ability to connect with a lyric like nobody else that I’ve probably seen on this show. Some of these songs are so perfect because nobody else on this show can do what you just did. It was so perfect.”

Sacred Ground
Terry McDermott (Team Blake)
Terry was the last performance of the night. Terry sang a perfect rendition of “The Beatles” Paul McCarthy song “Let It Be.” He had the help of a gospel choir to sing background vocals. Terry’s wife and son were in the audience to support him.

Adam’ reaction – “Thank God for you Terry. You’re so wonderful. Sometimes there’s so much wrong with the world and to have a moment and things like this to make us so happy and inspire is pretty important. You did an incredible job.”

Blake – “That song -that’s sacred ground. There’s only a hand full of singers in the world that should attempt that and you’re one of them. None of us will ever be able to scientifically decide what musical perfection is.
But, in my heart I believe that that was musical perfection.”