It Is Funny, It’s Violent, But In A Kind Of “Road Runner” Way 10/12 SEVEN PSYCHOPATHS

EXCLUSIVE Set Report!
NBC’s own fashion competition showcasing some of the most young, up-and-coming talented fashion designers in the country returned to filming last week in Hollywood. Many changes were immediately noticed upon entering the new stage location where the show is now shot (last season was filmed in Culver City). A makeover to the “Fashion Star” set included more than the host.

No photos are allowed inside of the studio, so below are some sample photos pulled from various Fashion Weeks. 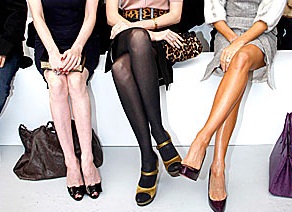 As NBC earlier announced, “Fashion Star” has a new host taking over from Sports Illustrated super model Elle MacPherson. The new girl is: Louise Roe, a well-known fashionista and host of The CW’s “Plain Jane”. What else is new? The whole set! The new set has been overhauled to look more in-line of what a real Fashion Week fashion show looks like. The chairs, decked in white cloths and tied in the back, are seated closer to the catwalk with a big audience consisting of rows of people all sitting in the draped chairs. At the end of the cat walk sits the three celebrity mentors – Jessica Simpson, John Varvatos, and Nicole Richie. The whole stage and catwalk are all white. 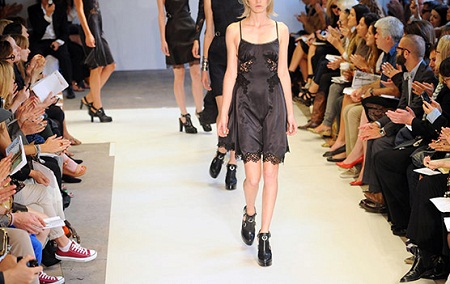 During the episode that we visited, the designers were challenged to create “sexy”, garments to sell to the three potential buyers, Saks Fifth Avenue, Express and Macy’s. In the beginning of the episode, host Roe asked Jessica Simpson and Nicole Richie how they define sexy. Jessica Simpson replied with “it is all about confidence”. Nicole Richie said, “Sexy is confident and fearless”. When Louise asked buyer, Terron Schaefer how he defines the term sexy, he replied with “Like Marilyn Monroe said, sexy is a drop of Chanel number 5 perfume”. It was interesting to watch how the designers defined the term through their creations in which they made in only 48 hours. 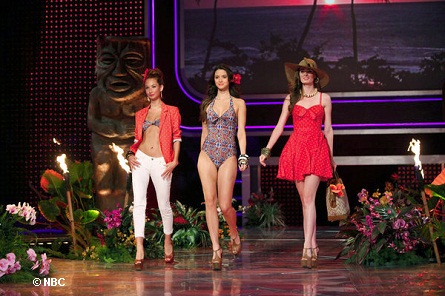 Pictured: Here’s what the set looked like from “Fashion Star” season one.

Some of the dresses were short, tight and slinky while others were bright, colorful and left a lot to the imagination. The Menswear consisted of blazers, light sweaters and short pants. The designers that created Menswear failed to use color. They all used grey and black. When designing for a Spring collection, it is important to incorporate color. The buyers did not like any of the Menswear because they felt like it was too heavy for Spring therefore their customers would not purchase it. 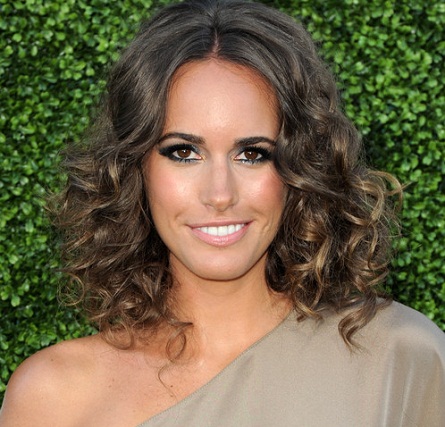 “Fashion Star” was filmed last season during the months of July and August. With season 2 kicking off at the beginning of October it appears contestants will have less time to prepare their designs for the Spring season. It seems that buyers are putting-in larger bid amounts so far! Some numbers examples are $75,000; $95,000; $100,000; $175,000; and we’ve heard $200,000- but didn’t happen at this episode.

After the buyers made their decisions as to why they would not make a purchase on a particular garment, they would explain to the designer their reasoning. It is interesting to learn about how they make their decision. Most of the time it was because their company already carried something similar to that design and they were looking to extend their collections by adding more of a variety of pieces. This episode showcased that when it comes to fashion, “sexy”, no longer needs to flaunt a lot of skin; if you have high self-esteem, you are going to look sexy in whatever you wear; good clothing only adds to that confidence.