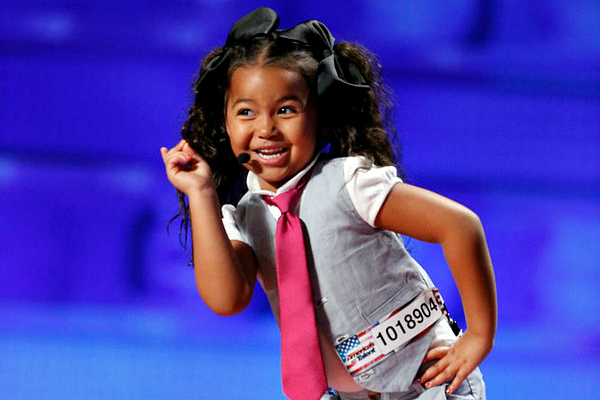 This season of NBC’s “America’s Got Talent” viewers will be treated to a show opening of audiences clapping to Queen’s “We Will Rock You.”

Hosted by Nick Cannon, during the auditions at The Dolby Theater in Hollywood, returning judges Howie Mandel, Heidi Klum, Howard Stern, and Mel B. watch an awry of talent from singing children to a want-to-be physic.

The Return of Matt Franco, and Golden Buzzer!

Howard said it’s been a great week in Los Angeles and the weather makes it miserable in New York. Past winner magician Matt Franco was seen with Howie that day behind-the-scenes of filming. Before the start of the show, producers set-up a shot of Howard Stern hitting the Golden Buzzer. This not only tells us that the Golden Buzzer is back, but also that Howard uses it again this season.

The first act up from their last day of Hollywood auditions was a visual group called “Vertical Impact.” They are best friends and have been together for ten years. There are nine in the group. Their act, they said is “defying gravity” and their goal is to “switch the perspective” for the audience.

Jill Schultz is the woman who’s idea it was for the act. Mel B. said “refreshing magical” but also said it repeated itself and could have taken it further. But, it did wake her up. Heidi said it was hard to understand the story but, “great first audition.” Howard disagreed stating that it wasn’t a great first audition at all. “You indicated that you were going to blow my mind. There was no cool manipulation of the images,” he told them and that it was a good concept. Howie reacted with “we like to see people doing things and bringing other elements …they didn’t mesh at all.”

All together the judges thought they were not really good. When Mel B. suggested that they could get better on the show, Howie said they’ve been doing it for ten years. How are they going to change in one weekend.

THE SING OFF A capella Group

The next act to enter onto the AGT stage were six good-looking young men. Howard said they look “macho”. They formed five years ago and call themselves “Street Symphony”. Watchers of NBC’s a capella singing competition show “The Sing Off” will remember this group from there. The members revealed that they went to high school and college together. They sang Radio Head’s “Creep” song. Howie buzzed them early on. Howard asked them what’s holding them back? They said a capella is just now becoming popular and they want to be in the forefront of it. Howard said they “filed-up the room” and that they ARE in the forefront. Howie stated “it was just boring. It bored me.” The only singer judge on the panel Mel B. responded that it was a different sound. This took on a different feeling – eerie and moody,” and said she likes “weird.” Heidi thought that the background singers were “spot-on”. Howie stuck with his “no” vote.

It’s not AGT if there’s not a Psychic on the show! Patty claimed to be Psychic, Medium, and a Witch. But, a good witch. She said she started practicing her talent at age two or three when she could see and talk to spirits. She said she currently makes a living as a Psychic and was voted “Top Psychic”. She also claimed to be able to read animals, stating that they speak in images by showing her pictures. This lead to her wanting to do a read on Howie’s dog who was, unknowingly to Howie, brought out onto the stage by host Nick Cannon. Apparently, Howie has been having problems receiving postive attention form his dog. Howie then joined his dog on stage. Patty said the dog needs to know that Howie likes him.

Howard joked that it’s because of Howies’ OCD why the dog thinks he doesn’t like him. He also said if he was dead, she’d be the last person that he’d contact, and admitted that he’s not a fan of Psychics. He said it’s “nonsense”. Heidi suggested that Patty should have told them each something about themselves. She tried to read Mel B., but Mel said she’s scared of Psychics. Howard read Mel B and said she’s thinking about him naked.

“The Broken Duo” was the next audition. Marney and Patrick met eight years ago at a music camp in Main. No, it’s not just for kids! She plays the piano, he plays the cello. They covered Sia’s “Chandelier” song. The audience gave them a standing ovation. Heidi said there is no doubt that they are talented but not sure if that’s enough for $1 million. Howard said there was no element of surprise partly because the judges have seen so much and he wasn’t sure if America will be entertained by them each week. Mel B. called it “elevator music” and said they played it way too safe. Howard said they got to see a Sia song being brought onto the elevator. The audience booed.

A group of three young deaf dancers were the next act. Mel B. said they were in sync and it doesn’t matter what their story is. Heidi called them good dancers, but not great dancers. She said that they do deserve a shot though. Howard was inspired by their story and said his heart is with them. But, as dancers, they are going to have to compete and come-up with moves that are different and be more risky as dancers otherwise they will “fade away.” 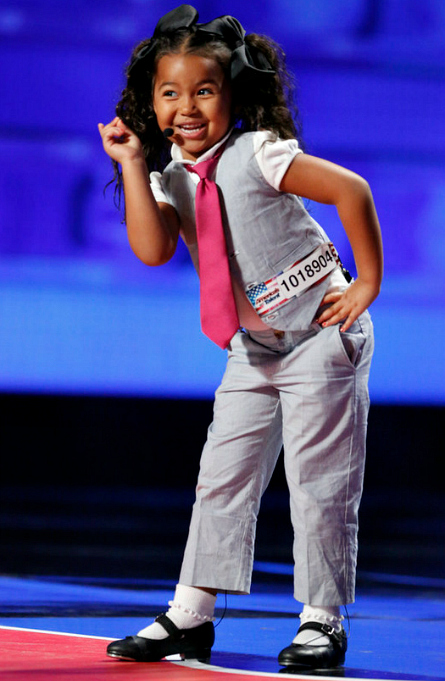 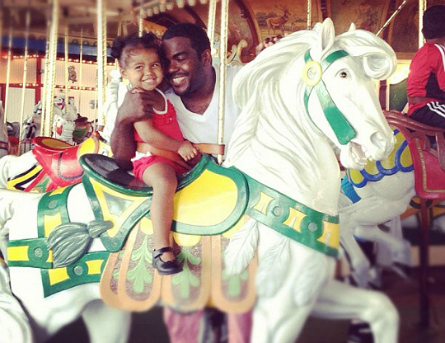 A small five year old girl came onto the stage named Heavenly Joy Jerkins. Yes, “Jerkins” as in the daughter of the famous music producer Rodney “Darkchild” Jerkins. He produced music for Mariah Carey, Beyonce, and Michael Jackson. Mel B. realized this right away and worked with her father herself. Producers of the show came onto the stage to tell Mel B. that because of the personal connection to the contestant’s father, she would be removed from the judging on this act. That meant the Heavenly was auditioning to win over two of the judges’ votes.

Heavenly sang and tapped dance like a Broadway act and was really a lot like a modern day Shirely Temple. Heavenly said she’d like to give the $1 million prize if she won to charity. After her audition, Howard responded “kid, you’re going places. Shirely Temple is living somewhere inside of you.” To this, Heavenly responded with Jesus is living inside of her. Howard adored her. Heidi told her that she did such a fantastic job and thinks America will fall in love with her. Howie told her “you are beautiful. Your name is perfection. You ARE Heavenly” and he bet her Dunkin Donuts that America will fall in love with her. Howard thinks that she’ll have her own TV show, line of clothing, and will own Nickelodeon in a few years.

One of the more surprising auditions came from Ryan Shaw from New York. He’s and R&B, Rock, Soul singer and has had three Grammy nominations! He earns a living singing and he played Stevie Wonder in a Motown Broadway show. He said he’s still waiting for that big break. He also tings at weddings and his biggest audience was when he opened for Van Halen in their reunion tour. For his AGT audition, he put his own twist on Beatles song “Yesterday”. Heidi wanted to hear the whole song. Howard called him the best singer that they had so far. Mel B. called him an “incredible singer” and told him he was on-point, but she didn’t believe it. “I missed that extra something.. that extra sprinkle on top.” Howard loved it and said he reminded him of past AGT winner Michale Grimm. Howard pointed out that Ryan has more Grammy nominations than the “Spice Girls”, Mel B’s former girl group.