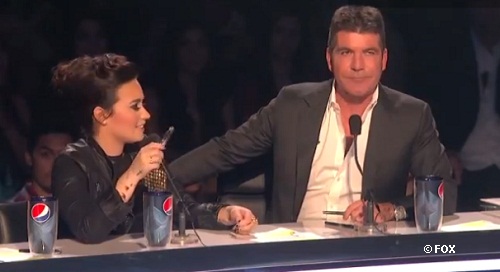 We didn’t know that “The X Factor” had a boxing ring like “The Voice”. They don’t, but that didn’t stop Simon Cowell and Demi Lovato from going at it on last night’s episode. It started off light when Demi made a comment on Diamond White and Simon responded to Demi with some annoyance in his effort to stand-up for Diamond’s performance.

As the stakes are raised, tempers are sure to flare. It didn’t stop at Diamond White, Cowell and Lovato continued their stabbing all throughout the evening. Talented artists took to “The X Factor” stage to attempt to claim the number one spot on this week’s Leader Board. One such artist is Diamond White who opened the show with a Whitney Huston song.

Diamond White (mentor – Britney Spears) sang “I Wanna Dance With Somebody” by Whitney Huston.
She was in fifth place last week. Diamond told Carly Rose that she wants to be ranked high like her.

After her performance, LA Reid said, “You always seem to start off slow. But, A for effort, B for execution.” His comment received boos from the audience. Demi wasn’t thrilled with Diamond either. She said, “Not everything has to be so serious. It’s nice to see you having fun.”

Simon said in response to Demi’s comment, “I don’t know what else this girl could have brought. She sang, she danced. It’s the hardest thing in the world to do . To dance and sing too. You hit the right notes at the right time. What I liked about it is that you are gunning for number one.”

Diamond’s mentor Britney Spears validated her stage performance by stating, “I am so proud of you. I’d dance with you any day.”

Vino Alan (mentor LA Reid) performed next by singing The Righteous Brothers “You Lost That Lovin Feelin”.
After the performance, Britney was the first to comment by saying, “I feel like it’s the same thing every week with you. I feel like something needs to be freshen up” Demi said, “I agree with Britney. I feel like you have a lot of soul in your voice.”

Simon commented, “You have a very good singing voice. There’s so many amazing songs you can sing. And that wasn’t one of them. You went into a weird Reggae thing and then you’re hunched over through half of the song and it just didn’t work.”

Vino’s mentor LA Reid responded, “I completely don’t agree. You did take a risk because you’re brave. I don’t expect that other judges to support you because you are a threat to their contestants.” Simon responded to LA’s statement with “That was not a $5 million dollar performance.”

Paige’s rendition is so different from the original, here’s the original song by Rick Astley from the 1980s below:

Paige Thomas performed next. (mentor- Demi Lovato) She performed “Never Gonna Give You Up” by Rick Astley.
“Last week’s performance was definitely emotional,” Paige said. She also said that she sees herself as a dancer. Demi told Paige, “My concern is when we have a huge production, it pushes you in low.” Demi also stated, “I’m going to help her as much as I can.” Paige said that she was going to go against Demi’s advice and it’s a risk.

After Paige’s low-key and hip performance with some backstage dancers behind here, Reid said, “That was by far your best performance. Demi, I have to commend you. This time you got it right!”

Britney commented on Paige’s choice to stick with some stage production with back up dancers which was not what Demi recommended in the beginning, “It was a legitimate miss. But I thing it worked.”

Simon asked Paige, “who chose the outfit?” Paige answered, “Kind of everyone.” Simon- “I asked the question because this is the first time that you looked and sounded like an actual pop star. this sounded like you making a record.” Demi answered Simon, “We worked together on this. I’m so proud of you. I think working together, we clicked.”

Fifth Harmony (mentor – Simon Cowell) performed Kelly Clarkson’s “What Doesn’t Kill You (Stronger).
“I think this is going to be their strongest performance yet,” said Simon
The all-female group said, “This competition can be extremely stressful,” and it helps that they have four shoulders to cry on. On a sad note, Alley’s grandfather passed away this week.

After their performance, LA spoke first. He gave his condolences, then said, “I didn’t hear an original melody.” Demi also empathized with Alley, then said, “I think that this was probable one of the best performances that you’ve given. It was awkward to see you guys standing there to an upbeat song.” She was referring to the girls immobility during their performance.

Simon said that the people who wrote the song are personal friends of his and they are sitting in the audience. “This is the first time I can see you one the charts. I can tell you Alley, your grandfather would be very proud.”

Carly Rose Sonenclar (mentored by Britney Spears) sang “Rolling in the Deep” by Adele
Carly said, “Being in the number one spot, I didn’t expect it at all.” She also had some concerns about performing such a popular Adele song. “This song is so well known, it’s gong to be hard to make it my own.”

Demi had the opposite response with, “I’m not even your mentor and I’m proud of you. When you step onto the stage, I feel like you’re 13 and that’s hard to do. You sing such soulful songs.”

Simon said, “I felt the first half of the song was good. I felt like the second half was sensational! I feel like outside of this show you are not human. You may be disqualified for the show because aliens can’t enter.”

Britney was proud of her student and said that she reached her goal by bringing her to “the next level” of the competition.

Tate Stevens (mentor – LA Reid) sang “Somebody Like You” by Keith Urban.
Tate dedicates every song to his wife. Tate said to LA that his drive for winning “The X Factor” is, “I don’t want my wife to have to work. I don’t want my kids to want for anything.” Tate dropped to the number two spot last week. “It’s so real,” he said was his feeling about it. Tate told LA that he thought of playing a guitar because that gives it a different dimension. LA said with Tate, “My concern was his ability to entertain.”

Britney responded after Tate’s performance, “I’m sure we’re going to be seeing you take home a country award!” Demi said she loves that Tate dedicates each song every week to his wife and that she hopes to marry a guy who loves her that much one day. “I love that you have so much on stage. I felt like I was back at home in Texas at a barbecue.”

Simon took a stab at Demi’s comment on being married by saying, “I think that may be a tall order.” Demi replied, “At least I’m going to be married one day.” Simon said, “I’ll be married.” Demi brought it back to Tate, “This is about Tate.”

Simon’s advice to Tate was, “First of all the bad news, don’t dance. The good news is that you’re back. What I like about you Tate is that you are so likeable.” LA said, “The difference between you and Simon is that he’s likeable – you are loveable. I’m proud of you Tate!”

Ce Ce said, “Demi and I really need to work together this week to see what’s gone wrong.” Demi said to Ce Ce, “What’s kind of faded a little over the past week is that fire.” Ce Ce said, “I will work my butt off this week to get to number one…I didn’t audition for this competition to be in eighth place.” Ce Ce said, “The performance this week is to go hard or go home.”

Britney stated, “You def stepped it up a notch.” Simon responded, “No one can say you’re not a trier. What I hate about that performance is that it feels like I ate too much chocolate cake,” Simon’s reaction to all of the visuals and costumes happening on stage. He ended with, “My advice is pack a suit case.”

Demi said, “I saw that fire in your eyes I think you came out swinging.”

“The X Factor” then debut Britney Spears new music video with Will.I.Am from “The Black Eyed Peas.” When Khloe asked Britney what it was like to work with Will.I.Am, Britney said, “He is like a big kid to work with. It was a lot of fun!”

The last performance of the night was by Emblem3 who sang “I’m a Believer”
They were in fourth place last week. They said, “It’s starting to get more and more intense.” Simon told the all male group, “I want one number to be in your head this week and that number is one.”

Britney said, “I’m a believer in you guys, But I didn’t really like your song.” Demi said, “I have to agree. I just don’t understand what Simon is doing with you guys. It’s very predictable every week” With some resentment, she continued by saying, “But people are going to like you because your good looking and you’re young.”

Simon fought back at Demi’s comments by stating, “I have to say, you criticizing me for doing a bad job is quite ironic. I sold 300 million records sweetheart. You guys have turned into real pop stars. I love your energy. Whatever we give you, you take it on, you have a sense of fun with it. Actually this is one of my favorite performances.”