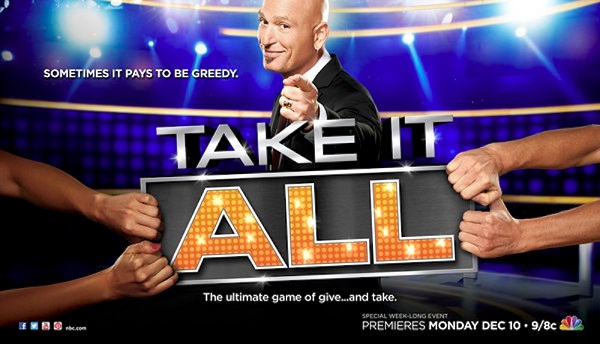 From Hovercrafts to exotic vacations NBC new game show hosted by Howie Mandel is not your typical holiday home game based on “White Elephant”. From the same Executive Producer and staff from “Deal or No Deal” comes “Take It All!”

The Game Play:
In a recent press interview, Howie Mandel explained how the game is played and what makes it different from how players would play it at home. He said that the prizes are extravagant and “beyond any gifts that a Secret Santa would have.” Mandel explained the rules, “We start with five. Everybody comes out with a decent prize. Who ever ends up with the least expensive prize, gives it back and goes home.” By the end, there are two people left that have a variable of “Cornucopia of extravagant prizes and they can pick cash. Then they have a choice. Their two choices are ‘keep it’ so they can keep everything that they have, or ‘take it all’ If one decides to take it all they get everything that they’ve accumulated throughout the hour plus what their opponent accumulated. If they both decide to take it all, they both end up with nothing.” Mandel described the game as “It’s great gamesmanship. It’s like poker.”

Mandel said it’s like poker because the game play depends on if “can you bluff somebody and you create a story and believing in what you’re saying?” Players who play the right way will receive a gift that may not be of a lot of value, but they can pretend that it is in order to make their opponents want to “steal” it away from them.

No Whammies!
There are no “dud” gifts. In one of the beginning rounds when the amounts are lower you could end up where there’s a range of $15,000 to$100,000 in one round. Mandel explains, “In any other game if you end up holding a $15,000 prize which is a really nice, valuable gift – that could end up being the dud because it could end up sending you home. You have to give that back and give back everything that you’ve accumulated up to that point.”

Original Prizes:
Mandel guarantees that viewers will see things that they’ve never seen on any other game show. Things like hovercrafts, and jet packs. “I’m just as blown away as the contestants when the gifts are revealed. I’m like oh my God, I want one!” Mandel said this is because he’s never gone into the prize room because he wants to be blown away by these prizes too. “I don’t know what’s coming-up.” He admits that he plays along with the contestants.

Mandel, who is also an Executive Producer on “Take it All!”, said that when he presented the game show to NBC, “I went into a room and showed them a game not knowing that it would lead to seven hours of television now. I”m thrilled.”

Turned-Down Other Hosting Gigs:
“You realize the reason people are playing it at home (Yankee Swap, White Elephant, Secret Santa) is because it’s a great form of entertainment and a great interactive social, fun game. I have no interest in saying alright question #2 is this, and reading questions,” said Mandel. He also stated that it also helped when he saw how this game can be developed for television and its entertainment first and foremost.

No Deal:
More than game it was humanity, it was social, more than game it was viscerl. I got trapped into Deal Or No Deal. I didn’t want to do it. I didn’t want to be a game show host. My wife made me do it and she was right. What I love about it is what it became. It became this intense party environment that I loved to show up to every day. When people did well it was the best high in the world and I saw that opportunity here with this game.

Candid Camera As A Game Show:
“I wasn’t really a fan of game because I couldn’t play. My favorite thing growing up and why I went into comedy was” he said hidden camera show “Candid Camera”. He said he loved it more than stand up comedy, “more than anything was real people’s reaction to uncomfortable situations. – that’s what you get with Deal or No Deal, and Take it All. It’s about how would you react in this really hyper experience environment that we create for you. It really is Candide Camera in a game show environment.”

It’s Not A Game:
Mandel stated the “Take It All” is “not a game.” He said,”It’s more about humanity. So, its not a game. There is strategy there is gamesmanship there is bluffing.” He said some contestants lie, and it’s fun to watch . “That’s what draws me to that much more than any game. I’m offered a lot of games where trivia is involved, stunts are involved and I have no interest to do that.”

“Take It All” premieres Monday, December 10 at 9pm on NBC