It’s Dangerous! Season 10 – SO YOU THINK YOU CAN DANCE 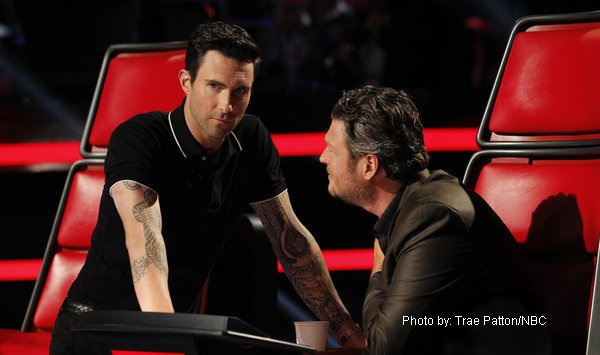 The first night of “The Voice” live performances where America votes has the contestants and mentors back at the Universal stage where they are all fighting the heat through a barely bearable non-conditioned room as host Carson Daly announced at the start of the show that the air conditioner had gone out. 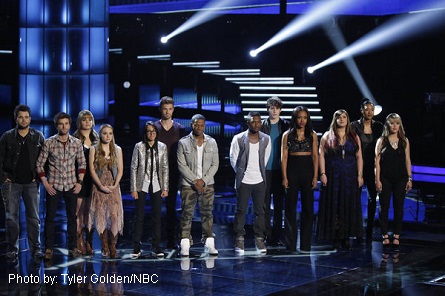 Pictured: The last time the twelve contestants stand on THE VOICE stage together.

The twelve contestants who were selected by America last week to move-on in the competition and in the live weekly performances all sang tonight in order to gain more of America’s votes to continue to remain each week to be the winner of “The Voice.” See who gained enough votes to continue in the competition. Two contestants did not garner enough of America’s votes and were sent home in night two to give America their ‘Voice Top Ten singers. Team Usher was up first with singer Vedo. “He is one of the few contestants that has the ability to dance,” said Usher of Vedo. Vedo got the chance to showcase that when he performed a Michael Jackson song, “Rock with You.”

After his performance, Shakira said, “You leave your heart on the stage every time you perform.” Blake responded to Vedo’s performance with, “This is the one time the dancing didn’t affect your performance.” Usher agreed with “You paced yourself enough to make it through the song. That right there will win you votes.”

Results of America’s Votes:
Unfortunately, America did not vote to keep Vedo in the competition and he was eliminated. Holly has made several of her own records which, as Blake said, “shows that it’s not a hobby.” Tucker sang “Broken Wing” by Martina McBride. 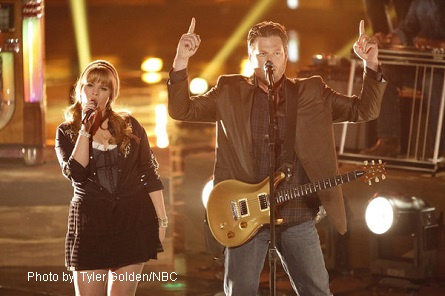 After her performance Shakira reacted, “Borrowing from Blake – Gosh darn it! I didn’t know you had that in you. You’re amazing.” Adam said, “You gave one of the better performances of the shows.” Blake responded, “The confidence has come alive. I know somewhere Martina McBride is saying Oh Gosh! You did it justice. You made a difference tonight for Nashville.” 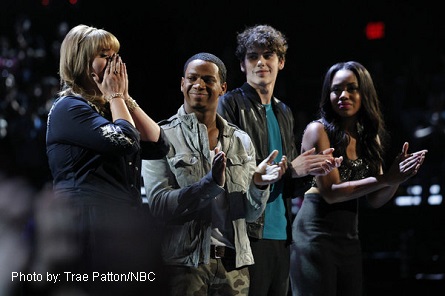 Results of America’s Votes:
Holly Tucker was the ninth save of night two. 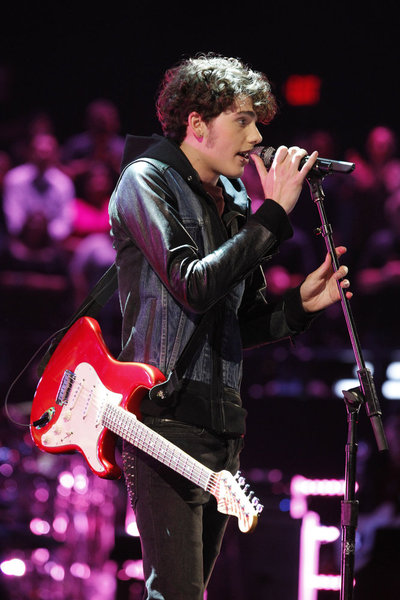 “I was playing a guitar by myself. A kid walked-up and said ‘why are you so weird?” – Garrett Gardner. Gardner put a new spin on an old popular boy band song by singing “I Want It That Way” by The Backstreet Boys with not a lot of positive responses from the mentors.

Adam said, “That wasn’t my favorite choice. It was good. But, it didn’t captivate me.” Usher said, “It was good. Sometimes constructive criticism should only make you better. It’s a different version of the song and took people by surprise.” Shakira came to Gardner’s defense with “It’s not easy to make rock ‘n roll and to make it bad-ass like he did. Tomorrow we’re going to see a lot of people downloaded this because it’s cool as hell!”

Results of America’s Votes:
It was wishful thinking for mentor Shakira. Gardner was voted off. Sarah said that her mother talked her into doing two pageants as a way of her getting her singing out there.

Blake was the first to respond to her performance, “Thank you for showing the extremes of your voice. It’s one of my favorite songs. Incredible job.” Shakira stated, “This song definitely suits your voice and style. I think tonight this song is perfect for you.” Her mentor Adam said, “It’s so hard to do what you do. That grit that Blake was talking about. That range that you have make is so special. That was the greatest song.”

Results of America’s Votes:
It was revealed that Sarah was America’s third save of the night. The Swon Brothers on the first night of the Live Shows! See their photo gallery here

The “Swon Brothers” sang “Who’s Gonna Fill Their Shoes” by George Jones. The Swon Brothers said that they did a variety show where they did Elvis.

After they sang, Adam said, “You guys were incredible. I didn’t know it was a competition.” Their coach Blake was very proud and said, “In my mind, George Jones was the king of country. This was an honor in country music the way you did it. I think this is y’alls break-out moment.” 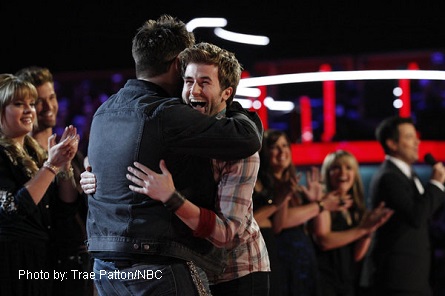 Pictured: Zach and Colton of The Swon Brothers.

Results of America’s Votes:
“The Swon Brothers” were the second contestants to be saved by America’s votes. 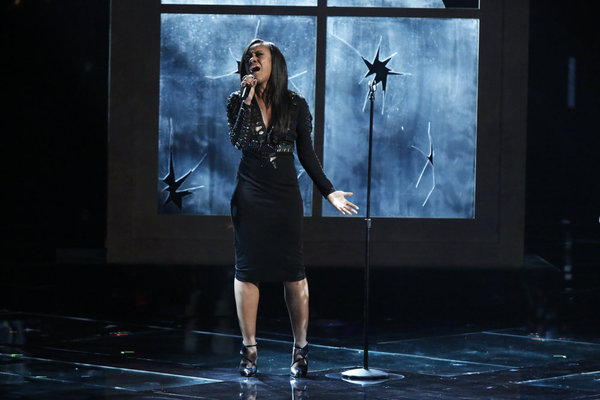 Usher said “I felt like you kind of took us to church.” Mentor Shakira said, “It was heavenly. She is without a doubt one of the best voices I’ve ever heard. Heart-felt and emotional…very passionate.”

Results of America’s Votes:
The votes revealed that Allen was America’s tenth save of the night. Adam’s look-alike (minus fifteen years) got tons of attention from the female audience in the crowd. After Josiah’s performance, Adam said, “It was the sweet spot.” Blake said, “The combination of you and Usher. I was pissed at first because you didn’t pick me. But, that was my favorite performance. Adam’s clothes and Usher’s advice.”

Usher said, “He had a way he wanted to perform it. A lot of people see a different side of him. Josiah has a lot of different levels. You showed technique.”

Results of America’s Votes:
Hawley was the fourth save of the night. Danielle said, “I want to be a country pop artist. I know I can do it.” She sang “Wasted” by Carrie Underwood.

Shakira said of Bradbery’s performance, “I never detect an ounce of nerves. You’re like a sixty inch Margret Thatcher!” Her mentor Blake said, “I want people to know that this is exactly the girl in the video. Sixteen years old and this is happening right now.”

Results of America’s Votes:
America voted to keep Danielle and made her the sixth save of the night. Judith sang “You’ve Got a Friend” by Carol King. Hill said of her career so far, “Despite all of the artists I’ve worked with, it’s a tough business. I don’t want to go back.”

Blake responded to her performance with “You can’t really dissect that. Beautiful, powerful! It’s everything we’ve come to expect from Judith Hill.” User said, “You are totally in control over your destiny.” Her coach Adam said, “Your up against a lot of great voices on the show. Playing on the piano and singing is a gift and you can not teach that. The fiery of someone’s talent – you (audience) just experienced that.” 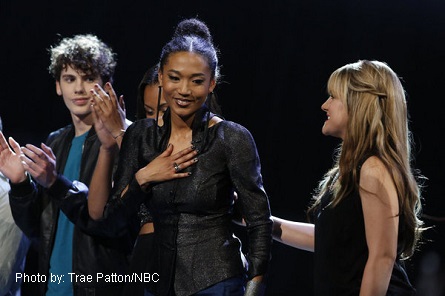 Results of America’s Votes:
It was revealed that Hill was America’s fifth save of the night. Michelle said, “When I was a kid I would dissect pieces of music on my own.” She sang “Call Your Girlfriend” by Robyn. The reactions she got from the mentors included: “That was very cool. You’ve learned to sing and dance with the song” said Shakira. Adam said, “You’ve become one of my favorites. There’s only one!”

Her coach Usher said, “Adam loves you a lot! I adore you. I think you are incredible. Every time you come out here, you give it your all. I hope America continues to vote for you.”

Results of America’s Votes:
America voted to keep Chamuel in the competition. She came in at save number seven.. “I consider myself to be a crooner.” – Kris Thomas. Thomas said he almost joined the Army just two weeks before “The Voice” called him to be on the show. He sang “I’ll Be There” by The Jackson 5.

Adam reacted with, “When Michael Jackson was ten that was high (his voice). That is a tough thing to do.” Blake said, “You always seem to choose songs that push you to the extreme. I think that’s why you are still around.” Usher said, “In terms of finding your way through the song, there were shifts. One minute I thought you were doing Mariah’s version, then Michael’s.”

Mentor Shakira stated, “So much sweetness and honesty at the same time. You should feel very accomplished today. I’m very proud of you.

Results of America’s Votes:
Thomas was America’s first save to remain in THE VOICE competition. The last performance of the night was a Mother’s Day dedication. Amber said “I want to cross-over [from country] to pop which is why Adam is the best coach for me.” Adam said, “Her heart is in country music. I’m really excited to see what this girl can do.” Amber sang “I’m Gonna Love You Through It” by Martina McBride. She dedicated the song to her mother who died of cancer at the age of 38.

Blake’s reaction to the song was “You made Martina proud. you did country music proud. You did Nashville proud. As much as I hate to say it, Adam has a star on his hands!” Usher said, “You kind of defy the laws of gravity. Just when You think you gave it all. You give more. You have an amazing voice.”

Shakira said, “It was very smart to make you go back to your roots and do a country song.” Her coach Adam stated, “You impress me every time you sing. I don’t know if I could have the strength to do that. You keep surpassing my expectations every week. You connect on an emotional level.”

Results of America’s Votes:
Carrington was America’s eighth save.

NEW TEAMS RECAP –
The forerunners for the mentors so far are Adam Levine and Blake Shelton keeping all three of their singers in the competition this week. Usher and Shakira lose one member each. The teams are as follows: 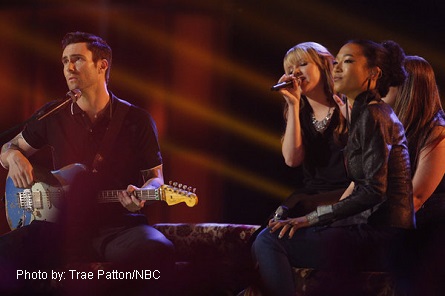