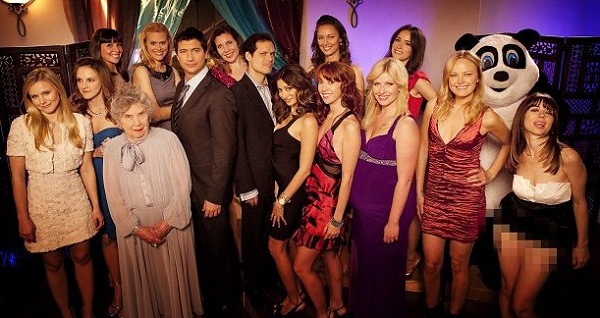 PARAMOUNT PICTURES Press Release:
Los Angeles, CA – E! is expanding its weekly comedy offerings with the premiere of the critically acclaimed, dating show spoof, “Burning Love,” executive produced by Ben Stiller. What began as a web phenomenon that follows charismatic, yet incredibly shallow, Mark Orlando (Ken Marino) as he embarks on a journey to find the kind of ever-lasting love that is only found on reality TV, will now be featured as a weekly series in seven, half-hour episodes. 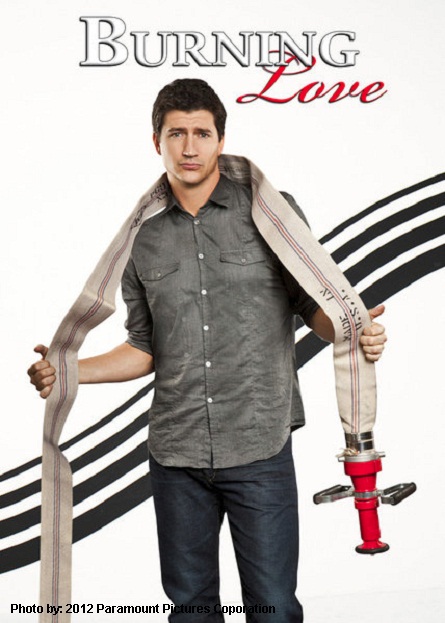 With a lineup of comedic heavyweights from film and television, including Kristen Bell, Adam Scott, Malin Akerman and Michael Ian Black, with special appearances from Ben Stiller (Executive Producer), Christine Taylor and Jennifer Aniston, the series brings the laughs and mega-watt star power to every episode. “Burning Love” will make its television debut Monday, February 25 at 10:00pm ET/PT, on E!

“E! viewers love clever comedy, and ‘Burning Love’ is a hilarious parody of one of pop culture’s biggest franchises that is perfect for our audience,” said Cyndi McClellan, President, Network Strategy and E! News, E! “We recognize that good content can come from anywhere and are excited to bring this popular web sensation to television in a meaningful way.”

In the premiere episode, viewers meet handsome bachelor Mark Orlando, a 34-year-old fireman who is looking for that special woman who will ignite his flames of lasting love. Mark will be grilled on what he is looking for, and perhaps more importantly, what he isn’t looking for in a partner. In his quest for true love, Mark will have the extraordinary opportunity to date 15 women … at once. Among them are Titi, the wealthy fashion buyer; Carly, the WNBA assistant coach who is not 100% attracted to Mark; Annie, the optimistic kindergarten teacher; 84-year-old Agnes, and Lexie, an intense District Attorney who cites ‘Fatal Attraction’ as her favorite film. From standup comedy challenges and pool parties, to bubble-bath dates and roller skating outings, these ladies will be taken on an emotional roller coaster, with some handling the pressure better than others.

The series is distributed and produced by Paramount’s Insurge Pictures, and executive produced by Red Hour’s Ben Stiller, Stuart Cornfeld and Mike Rosenstein, Abominable Pictures’ Jonathan Stern, Ken Marino and Erica Oyama. The series was created and written by Erica Oyama and directed by Ken Marino.