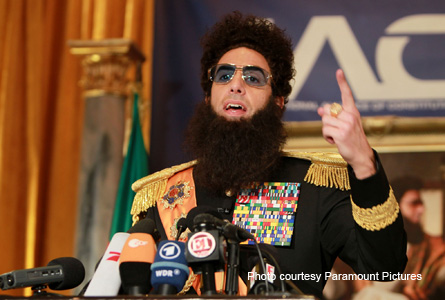 Paramount Pictures “The Dictator” movie starring General Aladeen (Sacha Baron Cohen) held a press conference in New York City where he spoke to various journalists from around the country about his thoughts on movies, pop culture, and politics. Watch his introduction speech below with more videos following featuring press questions and his hilarious answers!

When asked by a member of the press which U.S. Presidential candidate would he endorse, who would it be, General Aladeen said it would be Mitt Romney. Because “he has the makings of a great dictator. He is incredibly wealthy but pays no taxes. It’s not much of a leap to go from firing people to firing squads”. General Aladeen thought it amusing that much of the press were made-up of females.

For security, Aladeen bragged that he has 25 female virgin guards “who protect me at all times. I know that they are virgins because I have their virginity checked every night by the head of my penis”. Media was overwhelmed. General Aladeen responded “You are so all the time worried about everybody’s feelings. You cooky Americans. You can’t do anything or say anything. Everything is forbidden in this country. Relax, relax.”

How to ensure that his country remains a dictatorship? General Aladeen said his country loves being a dictatorship and that he is like a father to his people “quiet literally to about 1800 of them.” He addressed why he was banned from the BBC. Aladeen stated he had planned to use their airwaves to promote his anti-West, anti-Zionist platforms and address “those nasty rumors about he Holocaust”.

General Aladeen was asked who was the one celebrity who “got away?”. His reply is that they do not get away. “It’s hard to escape the desert”. He said congratulations to Megan Fox’s pregnancy and that there are rumors that he may be the father. Impossible he said because it would be the “first ever anal conception”. If that is true then also pregnant by him is Heidi Klum and Donald Trump whom, Aladeen said, “he does anything for money”. When Aladeen made a verbal attack on Kim Kardashian by stating that she is so hairy that wen he pulled her “undies” down he thought he was looking into a mirror. “E!” entertainment came to Kim’s defense by saying “You should apologize to Kim. You know she is on our network”. Aladeen said, “I am the Dictator, you think I am worried about a Persian girl with sisters, I will have her and her family sent back to Iraq”.

The Hollywood celebrity that he has the most in common with is Mel Gibson. He said recently in Wadiya he made him their public relations expert. “We have made him the head of our museum of intolerance”. He also said has a lot in common with George Clooney. “We are both champions of equality”. He said in Wadiya 1 in 4 women can read and he is trying to change that statistic to 1 in 100.

He responded to a Brazilian reporter’s question on if he would ever want to invade his country. Aladeen said he has already via Gisele Bundchen and plans on “launching a tiny missile into Adriana Lima”. Both women are Brazilian Victoria’s Secret models.

The final question of the press conference was by “E!” entertainment on why he dumped ashes onto Ryan Seacrest. Aladeen responded “It is not the first time he has had an Asian man poured onto his chest. I was showing him it was from South Korea. It accidentally fell onto him”. Aladeen ended the press conference by reminding reporters that as long as they write good reviews, their families will be released.