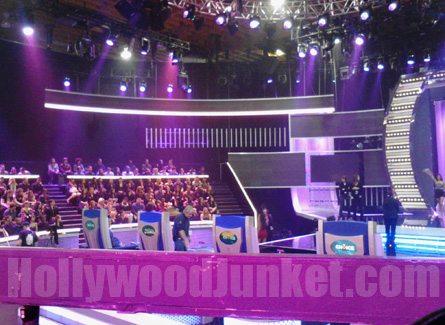 EXCLUSIVE! SET REPORT! Spoiler Alert! Spoiler Alert!
FOX network has literally put a spin on new dating show concept called “The Choice” by placing well-know celebrities in comfy chairs (very similar to NBC’s “The Voice” chairs) where they get to turn their chairs around for the girl or guy they’d like to go out on a one hour date with after the show.

It’s a slightly different format than what we witnessed during our set visit during the show’s run-through: https://hollywoodjunket.com/the-choice-foxs-new-twist-on-celebrity-dating/

While HOLLYWOOD JUNKET was on-set during the show’s filming, host Cat Deeley (“So You Think You Can Dance”) said that they literally got out on their date the same night. Deeley sported an opposite look from her other FOX hosting gig, SYTYCD by wearing fitted pants and loose tops for every show and her hair sleek and straight – versus her usual curls.

Each show is made-up of four celebrity bachelor males, except for one show that featured celebrity women, that must pick from a pool of thirty single women. The bachelors’ chairs are faced away from the women in order to choose them based on how they sound and what they say.

HOW THE GAME IS PLAYED:
Round 1- Girls step out onto the stage one at a time and enter via silhouette image until they step through the stage doors. Close-ups of each girls eyes and mouth is presented onto a TV monitor. She has 30 seconds to get as many men to turn around as possible. If only one man turns around, she is guaranteed that date with him. If more than one man turns around, then she gets to select whom she’d like to go out with. Each celebrity contestant must accumulate a pool of three women. If they reach their pool maximum first, then they get to watch the game. However, their chair does continue to spin along with the others until the end of the round.

Round 2 is the “Speed Dating Round”. Each celebrities’ pool of three women are presented in front of them with pageantry type sashes that reads the celebrity’s name. Each woman must do a question and answer session with their celebrity daters. At the end of this round, each celebrity must eliminate one female in the pool based on her speed dating answers.

Round 3- The remaining two women have to answer the same question that the celebrity asks. Deeley reads the question to the women one at a time while the second woman waits just off-stage with ear plugs. The celebrity must choose which woman he would like to go out on his date with. The other three males get to comment on what they thought the best choice would be for each guy decided. After that, the celebrity must choose who he wants to go out with by getting out of his chair and walking up on stage to select his girl. During this round, the more superficial men tended to walk around the women in order to see their back sides!

Round 4 – The actual date which was filmed at a separate location is one hour after they game play on-stage. HOLLYWOOD JUNKET is speculating that these dates occurred on a “restaurant” set created for the show on the same lot CBS Radford where the show is filmed. 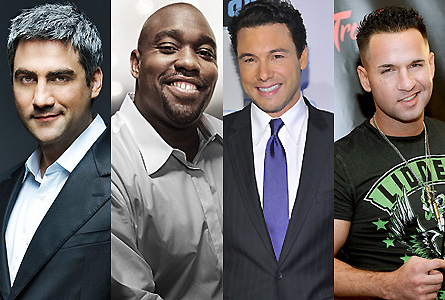 The fourth chair seemed to always be reserved for the most popular celebrity out of each bunch. They were: Pauly D, Joe Jonas, Tyson Beckford, The Situation, Rob Kardashian, and Carmen Electra.

The celebrity men showed their true superficial selves as they picked their potential dates. If they were disappointed in a girl after turning their chair and if another bachelor turned his chair, then they would try to bow-down by saying he thought they’d be better suited for the other celebrity contestant. Most of the groups of men were very selective while playing the game and wanted to charm the prettiest of girls on the stage. Comedian Finesse Mitchell was not taken by one female once he turned his chair around. However, when he saw her walk away, he then wanted to select her. Host Deeley responded by saying “let this be a lesson to you!” 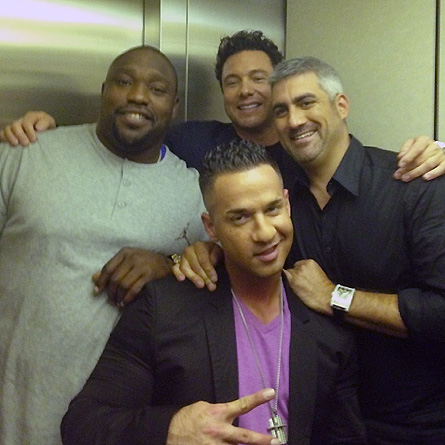 "The Choice" contestant bachleors hanging in the elevator!

One of the best shows was the one with Taylor Hicks group. These men were the most fun-loving, and wackiest of players. They played the game how it should be played and which is not to take it seriously. These men with Hicks included Warren Sapp, Rocco Dispirito, and from the “Jersey Shore”, Mike “the Situation” which is what producers labeled the back of his chair. During one incident towards the end of the games, Taylor Hicks was the last man whom had not completed his pool of women. He had to choose between two women who were brought onto stage and select the one he wanted out of the two. As soon as he heard the first one speak, he tried to turn his chair around. When the chair wouldn’t operate, he jumped out of the chair to look at the girl. Deeley walked to him from across the stage to explain the rules of that round to him. “You didn’t even let the other girl speak”. When Hicks pulled his “love handle” to turn back around, Deeley was still standing to the side of his chair with her arm a top the arm rest. She had to ride the side of the chair around with him. Hicks then threw her in the chair with him. Deeley was unharmed.

The most entertaining show out of all six was when celebrity women bachelorettes took to the stage. These beauties were: Hope Dworaczyk, Sophie Monk, Rima Fakih, and Carmen Electra. These ladies were, well, not ladies! They were mean girls, and whoa were they brutal! A couple of times Fakih turned her chair, then pulled her love handle back in hopes of turning her chair back around. Electra wanted to cancel one of her choices as well. Fakih also said she didn’t want to pick one of the men on-stage because she isn’t into side-burns. 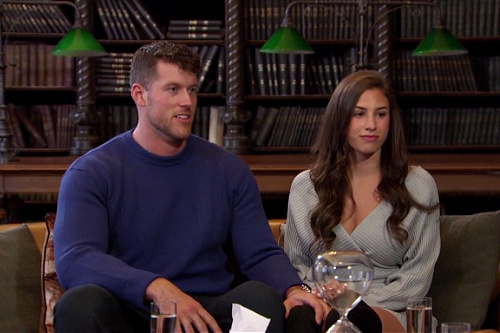