THE GONG SHOW:The Absurdity Continues in a Familiar Format

THE GONG SHOW:The Absurdity Continues in a Familiar Format 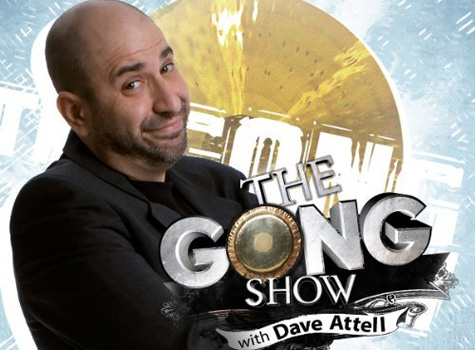 Some set photos from the new “Gong Show” are in this post. Out-of-focus shots are due to the difficulty in taking photos while on the set. 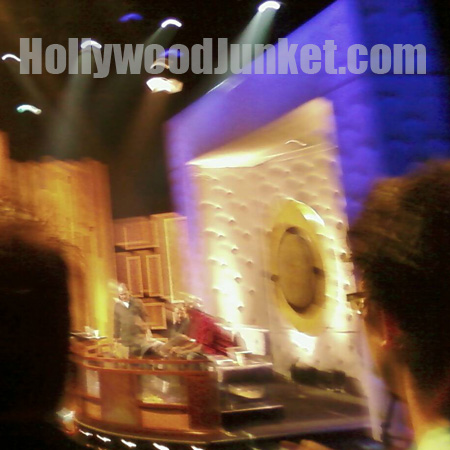 Photo of the New “Gong” with celebrity judges underneath.

COMEDY CENTRAL has revived “The Gong Show”. Funny, I thought NBC had already done that with “America’s Got Talent”. Anyway, the new version is hosted by stand-up comedian, Dave Attell (“Insomniac with Dave Attell”), who has a wise cracking, and vulgar type humor. Good for the show, but still lacking a Chuck Barris, charisma quality. He opened the very first show by wearing a wig, then throwing it onto the stage.

The theme music has been updated to one that sounds similar to “Girls Behaving Badly”. The set is a modern version of the old one. There is still a live band. Stage curtains have been replaced with Chinese-style sliding doors. The curtains remain only in the show’s logo. The judges sit on the opposite side of the band. The physical set itself consists of tiles in a bronze/copper texture, blue lights, and a padded surface around the judges and the gong.

This new Gong Show holds its own with some outlandish acts. To name a few: A young woman turned herself into a human slinky by hula hooping a number of different colored hoops, a yo yo routine, a man juggled fire while being upside down, two young women tempted the judges for a high score by stripping provocatively, a band playing ladders and buckets acoustically, a woman swallows a balloon, another women gets swallowed by a balloon, and of course, if wouldn’t be the Gong Show without a few obese half naked people, and a drag queen here and there.

The show is a bit more raunchy than the first one, but not by much. There are two Gong Show girls that have rock-n-roll/biker look. None of which were required to dance on stage in a bikini as in the original. Also, while Chuck Barris would be seen occasionally with a drink in his hand on stage, Dave Attell smokes (“American Spirit”) regularly on stage. 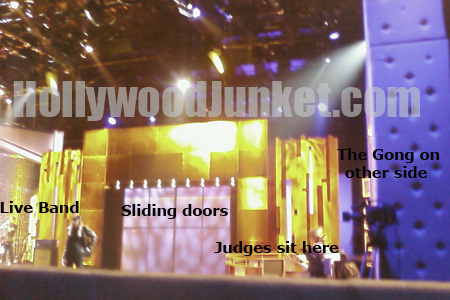 So far, no regular acts like the original version had that I enjoyed so much as a kid, like “Gene Gene, the Dancing Machine”, and “The Unknown Comic”. Another thing missing is the infamous giant hook, or cane that would pull unwanted talent off of the stage. The host immediately enters the stage once contestants are “gonged”. Contestants earn scores between 1-500. One act was too short to get gonged, but earned scores of -1. Once scores are tallied-up , a “ring-side” girl walks out onto the stage holding-up a final score card for each contestant that doesn’t get “gonged.” The show is a half-hour long and typically showcased 9-10 acts. The show throws-in a couple of over-the-top guests that serve as pure comic-relief. They are the ones that get the doors (curtains), shut on them before they can even perform.

Top winnings – a “Gong Show” belt, and $600 cash. And of course, bragging rights. Losers walk away with a “Gong Show” T-Shirt with the show logo on the front, and the words “I was Gonged, but not forgotten” on the back. Also, a few contestants were given Teddy Bears.

Word on the Set: Show producer, Adam Sandler, was seen just a couple of feet from the stage before the beginning of taping of the first show. No other sightings were reported throughout the rest of show tapings.