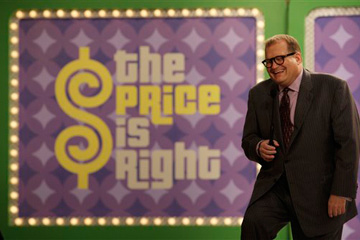 We were on the set of “The Price is Right” of an episode that will air Tuesday, May 31st. “CBS Sunday Morning” was there to shoot stage antics and behind-the-scenes footage of the classic CBS game show. 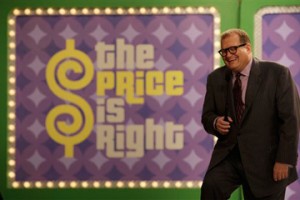 “The Price is Right” host, comedian Drew Carey looks great and as always was very friendly with the audience. Between show takes and game set-up, Carey chats with contestants on the show. Some of the games played that day included: “Pocket Change”, “Cover Up”, and “Grand Game”.

The player of “Grand Game” had to guess the price of a roll of paper towels. His answer was incorrect. Carey empathized with him after the cameras were done rolling by stating to the contestant, “who knows the price of one roll of paper towel?” He said ‘don’t most people buy them in big packages?’ Carey asked if the male contestant was single, who responded with “yes”. Carey jokingly commented that was why he didn’t know about the paper towels.

Some fun trivia about the games on “The Price is Right” was revealed by Carey. He said that game “Rat Race” was created by himself, and that “Pay the Rent” was created by Adam, from production. “Pay the Rent” has not been won by anyone yet. The production staff of the show play all the games to the show, and none of them have ever won “Pay the Rent”. Carey stated that once, a Marine “won it”, but he didn’t go for it, so he did not receive the winnings.

Carey told audience members that the line made famous by Adam Sandler in the movie “Happy Gilmore” in a scene with previous “The Price is Right” host Bob Barker, where he told Barker, “The Price is Wrong Bitch” is what callers to Carey’s cell phone hears when he doesn’t pick-up!

Contestants there that day that did not move-on to stage games got these consolation gifts: a wireless headset, and a computerized sewing machine.

This episode will have two cars as prizes (a Scion and a Chevy truck), as well as a complete womens’ outfit with shoes, handbag and sunglasses won by a male contestant. When the contestant asked if he gets to select the size of the outfit, the executive producer, Mike Richards, came out to the stage to answer his question which was “yes”. There is also a showcase that includes a shopping-spree in Paris. This episode airs May 31st on CBS.