THE VOICE: The Facebook to FOX’s Myspace, American Idol!

RISE OF PLANET OF THE APES: Live Preview!

THE VOICE: The Facebook to FOX’s Myspace, American Idol!

In two weeks NBC will officially bring to the states a Holland import singing competition show called “The Voice” produced by Mark Burnett that will rival FOX’s “American Idol” and may potentially dominate it.

HOLLYWOOD JUNKET was lucky enough to attend several tapings of the show thus far. We got a sneak-peek glimpse into what television viewers will experience.

Unlike “American Idol”, the famous singers on this show are “coaches” who listen to the talent without seeing them. The coaches are Adam Levine, Cee Lo Green, Christina Aguilera, and Blake Shelton. If they want to mentor singers, they must turn their chairs around to face them. As seen in the latest NBC teasers, one such talent had Levine thinking he was a she! This actually happened more than once with the coaches.

“The Voice” is hosted by Carson Daly who opens and closes each episode, then conducts interviews of the singers back stage for the remainder of each show. Daly seems to be very happy with how the show is going and even stated a few times that it reminded him of his days on “TRL” (MTV’s Total Request Live).

Each coach has to fill eight spots which make-up their “teams”. Coaches compete with each other to select the best possible team in order to produce the next big singing sensation. The chemistry amongst the judges is amazing and quite entertaining. Cee Lo Green and Adam Levine had an existing working relationship that worked-out well for the show. Aguilera’s sauciness and “divaesque” behavior make her fun to watch. Several times she is trying to sway a number of singers away from Levine and persaude them to be on her team, and vice-versa. In one incident, Aguilera tells a contestant that Levine will sell your grandmother a used car!

Green has to compete a few times as well against Shelton and Aguilera. Green’s famous technique to charming female contestants is “Hello pretty girl”, which Levine states the same can not work for him. In one case where Levine missed-out on his chance to take a talent under his wing, Shelton rubbed it in by stating “you really screwed the pooch on that one!”. Aguilera commented with disgust “Ohh!” Then later tried to restate the phrase, but said “scootched the pooch!”

Aguilera is the only female coach on the show which works-out quite well. She is the queen of this stage and having two bigger-than-life legendary female singers would only either cancel each other out, or be too much competing against each other.

During long filming hours, Aguilera was seen being bored, and irritated. The sound department had a mic set-up in her bosom. When they had to fix it, she grabbed it out of the tech’s hand and placed it herself. Executive producer, Burnett would come-by, say something to her that would put a smile back on her face. Burnett was very hands-on during the complete filming process of the show. He was set-up in a top seating-area of the audience with other producers and assistants watching all of the action below.

Viewers can expect to see a higher caliber of talent on “The Voice” than on “American Idol”. In the beginning rounds of the show, coaches were aside themselves in accepting many distinguishable voices. In the end, however, three coaches were left with incomplete teams which resulted in bringing back some favorites for another shot at being placed onto teams.

Two familiar faces that viewers will see competing on “The Voice” are Frenchie Davis from “American Idol” Season Two and Lukas Rossi, lead singer of “Supernova” a band formed from previous Mark Burnett produced music show called “Rock Band”. In the latter case, LeVine stated he regretted not pushing his button to turn his chair around. 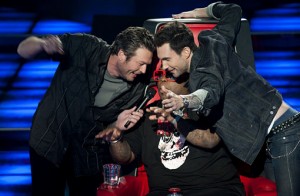 During that down time while producers were discussing how to resolve the issue of incomplete teams, Shelton, Levine and Green joined in singing the theme song to “The Golden Girls”. How this came about? The audience warm-up host was quizzing audience members on sit-com theme songs. Shelton stated that he watched the show by himself after the warm-up host said he watched with his grandmother.

“The Voice” premieres on NBC Tuesday, April 26th at 8 pm PT. The show goes live in May.