“The Whole 19 Yards, hosted by Chris Hardwick, best known for hosting MTV’s “Singled Out”, and current co-host of G4’s “Attack of the Show”, is a basic and toned-down take on the physical challenge shows like, “Wipeout”, “Survivor”, “American Gladiators”, and “I Survived a Japanese Game Show”. The show takes it one obstacle at a time.

Host, Hardwick, is almost a perfect fit. More perfect would have been a younger host. But, great for Hardwick style of hosting. He possess a quick wit, charm factor, and smoothness true to his “hip” signature.

Each contestant plays against each other to overcome all of the obstacle courses. The last person succeeding in the physical stunts and correctly answers the remaining set of clues, wins $50,000.

“The Whole 19 Yards” starts out with five competitors, and with host, Hardwick, standing at the end of the catwalk part of the stage against a closed, and separately hidden, larger stage containing the obstacle course behind him. The contestants are at the other end of the stage facing Hardwick, awaiting for the big “reveal” of what they soon must face in their physically challenging course. 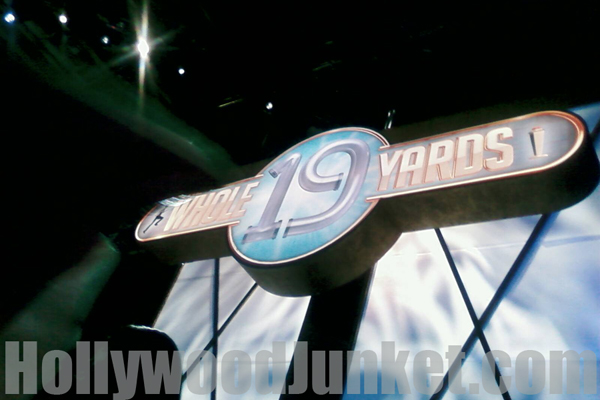 Wall beneath sign reveals a surprise obstacle course to contestants.

Once the surrounding walls of the obstacle course opens to the competitors (and we see their surprised and anguished reactions) , each of them must take a place at their own podium where they read a monitor displaying a cascading number of clues (usually eight) presented to them one-at-a-time. Once each player is able to pick-up on the answer that the clues lead-up to, they must run to the obstacle course with the goal being that they are the first one to finish it and get to the buzzer at the end of the course in order to correctly identify the answer to the clues. Each contestant has his or her own course. So, while the obstacles are the same for each contestant during a round, they must finish it first to have a shot. The contestant who gets through the obstacle course and buzzes-in first, does not win that round if his or her answer to the clues is wrong. The person coming-in second place, then has a shot at answering the question.

Examples of answers to some of the clues: turkey, Albert Einstein, Viagra, and Justin Timberlake.
Clues included: one reached a maximum of 85 lbs; His second wife was a cousin; Bob Dole endorsed it; and “He caused a wardrobe malfunction”.

Finally, the real kicker. The last, and major obstacle course, called “Flytrap” was set-up with very sticky Velcro (similar to “Sticky Wall”, from ‘Japanese Game Show’). The two remaining contestants dressed in full-jump suits that would attract the stickiness of the Velcro that consisted of a hurdles and mock “car wash” at the end. The outcome was found to be very humorous by the studio audience. Up until this very point, I thought the show would be a miss. But, after seeing this final challenge, I’d have to predict that this just might be the ticket to getting the show on the air.

The set-up of each stunt on a limited set was time consuming. So, if CBS picks-up the show, I’m sure we’ll see a much bigger scale of challenges and an expanded stage area, hopefully commissioning an otherwise, poorly designed stage.