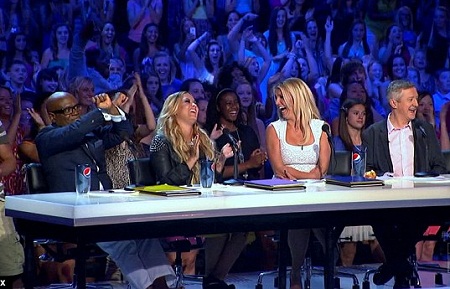 The second week of “The X Factor” auditions started out without show judge and producer Simon Cowell. His seat was temporarily filled by Louis Walsh. Simon wasn’t feeling well. The judges arrived to the set of “The X Factor” in Kansas, Mo. Louis Walsh, a producer of boy bands says he’s worked with Simon for fifteen years and says that Cowell asks his opinion when he’s needs someone to trust.

Ally Broke – I Want to Be as Big as Beyonce

Ally is seen talking with friends backstage saying “I’m so ready,” when Simon Cowell walks through and stops to say hello. Ally, who is a young nineteen years old from San Antonio, Texas, says she wants to do it all. Sing, act, to have a perfume and clothing line and wants to be as big as Beyonce. She sings “On My Knees” by Jaci Velasquez.” Ally continues to sing even after the music stops. LA Reid, “You really have a special voice and I’m impressed by you.” Britney said, “I was really surprised. I felt that you should be on Broadway.” Cowell said, “I have a feeling that we are looking at a future star here. You have an incredible talent. And you’re determination I feel it.”

Jeremiah & Josh – What’s There Not to Fall In Love With?

The duo of Jeremiah and Josh decided to audition with an original song. Britney said “your voices are magical. When you sing, you have a nice soothing sound. I wish you could wake me up in the morning.” Demi started laughing. Britney corrected herself, “singing, singing!” Reid said, “I want to work with you so I’m going to say yes.” All of the judges voted to put the two through to the next round. 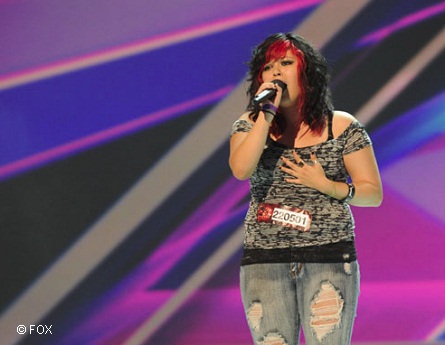 From the South side of San Antonio, Jessica talked about her recent struggles in life. “I want to make enough money to help other people…I’ve always done whatever I could with whatever I had,” said Jessica. “I feel like everything that’s ever hurt me or makes me happy comes out on stage.” A slew of friends and family were waiting in the wings backstage while Jessica performed for the judges. She sang “Nobody Knows” by Pink. LA Reid said “You are really, really special,” Britney reacted, “You have a strong voice. It’s really deep. You are amazing.” Demi said, “I don’t know where to start. You have a sparkle in your eye that you only see in people who have the X factor.” Simon reacted, “I didn’t like it…I LOVE it!”. Whatever hardship you have, you came out here and sang for you’re life…My favorite audition so far today.” 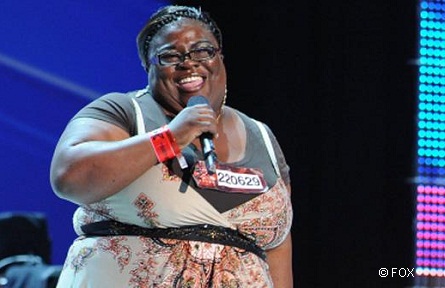 Panda Ross is 42 years young, from Dallas, Texas. She talks about Simon and wanting him to be her “baby daddy” and wore her “single” necklace for him. Panda said, “Singing is everything to me. I don’t have a lot of education, but I have a lot of personality, and it’s the gift that God gave me. I like to use that gift to brighten up everybody’s day.” and said she wants “America to have a little piece of Panda today.” Upon entering the stage she told Cowell she is his baby’s mama, and that he is her “boo”. She sang “Bring It On Home” by Sam Cooke.

Reid reacted, “I can’t deny how good that was. I love that song. That was the perfect song choice.” Demi said, “you’re so funny. You’re such a character, and your voice is so soulful. I loved every bit of it.” Britney said, “You not only have a good voice, but you’re charming…I was completely entertained.” Cowell said, “You sound like a legend. I mean that voice..I absolutely love you.” After receiving her four votes of “yes,” Panda’s pneumonia that she had been admitted into the hospital the day before, came back and she had to be taken away in an ambulance. “Don’t let Simon see me like this. Then he’s going to think that I can’t do it.”

Citizen – In A Time Machine

“It’s Raining Men” is the song playing in the background during the pre-audition interview for the all-male singing group called “Citizen”. One group member said “half of the artists are boy-bands” when looking at what’s popular right now. “Through music we are one!” was part of the group’s pep talk. They sang “Don’t Let Go” by En Vogue (a female vocal group). Their audition was very much like a “The Sing Off” performance. Reid “First of all – great song choice. Great arrangement. I really liked it.” Demi said “I think you guys have really great voices.” Cowell said, “I didn’t get it. It was ten years out of date. The more the track went on, the more you were getting excited and the vocals were out of shape.” The other judges voted “yes” for the group. Cowell’s last words were, “Guys, it’s like you guys are in a time machine to me.” 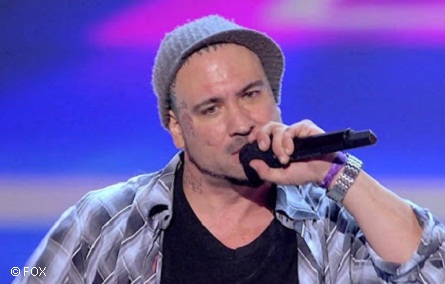 Vino Alan is 39 years old with a 15-year-old son. He said his audition is for his stability. “There’s only one $5 million prize…I’ve been working for this all my life.” He walked onto the stage and told the judges that the emotions were high backstage. He showed them his tattoo head. “I’m digging it,” said Demi. Vino sang “Trouble”. Reid said, “I was prepared not to like it at all. But, I heard something rather unique in your voice.” Louie reacted with, “I think you have something very interesting.” Britney said, “I was inspired, I thought you were very good.” There’s something unique in your voice that I haven’t heard in this competition yet” expressed Demi. 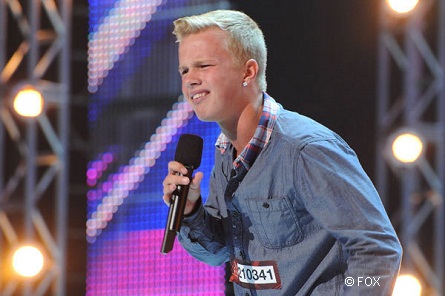 Rizzloe Jones – This Much Excited!

Eighteen-year-old Rizzloe Jones is from Kansas City. He said his frees style raps are always positive. “I know I have the X factor.” Competitor CECE introduces herself to Rizzloe to see how fierce or not fierce the threat is. When he tells the judges his style of music is rap, they are all a bit shocked. Rizzloe gets the crowd to their feet. Lou said, “I think we finally have a pop star.” Britney reacted “I felt like you were a young Vanilla Ice, Ice Baby. And I liked it a lot!” Demi reacted,”You totally surprised me because I thought you were going to sing country.”

CECE Frey – Just Another Day At The Office

CECE, a twenty year old mail clerk, said she’s willing to do whatever it takes to win. “If there’s something that I can’t do, I will learn.” She also said, she isn’t “in this thing to make friends, I’m in it to win.” When Demi asked her is she thinks she is better than everyone backstage, CECE said “yes.” CECE performed “Unchained Melody” by The Righteous Brothers. She said she “CECEfied” it. Demi stopped her audition short to request another song. CECE re-auditioned with “Ain’t No Other Man” by Christina Aguilera. Louie said, “I love ambitious people with talent. And, no one’s going to stop you.” Britney said, “You have the whole package. the look the charisma, the voice. You are amazing.” Reid said he thinks that she has the X factor. 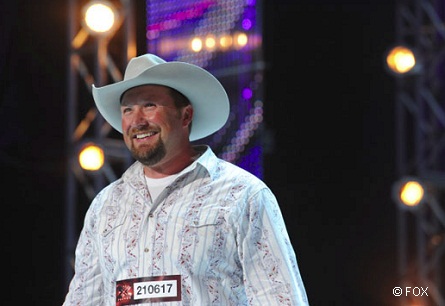 Tate Stevens – This Is Who You Are

Thrity-seven year old Road Worker from Belton MI, Tate Stevens said he attended “The X Factor” auditions because his kids pushed him. He said raising his kid is what he does now. Tate said he usually raps when Demi asked him what he’d be singing. She said, “you’re funny. I like that!” He said he’d have a “big-ass” party if he won the $5 million prize. Tate sang “Anything Goes” by Randy Houser. Tate received a standing ovation from the audience. Demi said “Do you realize how awesome this is to get them to stand-up and clap for you like that?” Britney said that he was her favorite so far. Reid said “You are the best thing we’ve seen in this town so far. You are a true country star.” Lou said “Tate you are the real deal. I think we found ourselves a country star.” 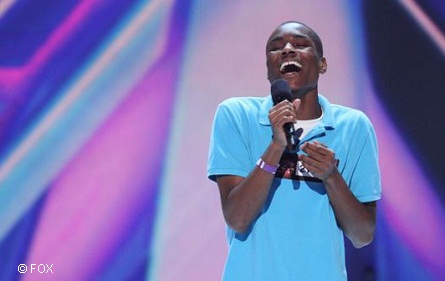 Deangelo Wallace – Would You Say That To Her Face?

When asked how he felt about judge Britney Spears, contestant, Deangelo replied, “I’m better than her. I can do her songs better than her” Would you say that to her face? “Yeah, I definitely would” he responded. He said “Deangelo has The X Factor. There’s no if’s and’s or booties about it,” and is sure he would get four “yes’s” from the judges. “If they don’t see a star, their fools.” Lou asked why does he have the X factor. Deangelo said “Obviously I have the look”, then said he’s better than Justin Bieber. He sang “With You” by Chris Brown. His audition was so bad, that the judges got up and walked-out. LA Ride said “It was all a big joke to him.” Demi said, “He would rather get attention by trying to be funny than taking advantage of the opportunity.” Deangelo finished his performance then walked off the stage and out of the studio with the show’s microphone. Deangelo accused the judges of being devil worshipers. The police arrived and took him to jail. Deangelo was charged with a misdemeanor.