It’s the collab that could have been easily predicted.  That is the TikTok app X NBC network collab eight episode TV game show series.  The show is called “Dancing with Myself.”  It features a celebrity panel that are mega content creators on social media.

NBC stayed within their celebrity pool when choosing Shakira and Nick Jonas were both former coaches on “The Voice.”  Super-star musical artist Shakira leads a panel of three celebrities – Nick Jonas, Liza Koshy,  called “Creators” to add commentary on a pool of twelve contestants who have to show-off their dance skills.  The host is model Camille Kostek (Wipeout).

It was reported on March 15th by Deadline that Shaquille O’Neal was originally scheduled to be part of the Creators panel.  Apparently, Nick Jonas has taken his spot.  It was explained, according to Deadline, that the change in “Creators” was due to some stage technical difficulties which pushed the show “a few days.”  This most likely means that there was perhaps a work conflict that O’Neal had with another project.

As for the “technical difficulties,”  during our sneak-peek, we can surely see why.  Imagine a stage that is a cross between “Hollywood Squares” and “Ready For Love” meets “Alter Ego” stage.  Yes, the contestants are real, not like on “Alter Ego,” but the stage lights and setting has a similar vibe.  The show also tries hard to cross the social media world with the TV one by interjecting voting emojis into the mix.  Tons of hearts, happy faces, etc. 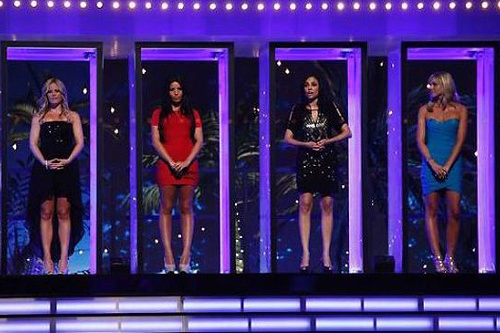 However, our biggest question was not about the stage, but about how were these celebrity “Creators” chosen?  Sure, we get that Shakira has a lot of knowledge about dancing based off of her thousands of stage performances where she has to learn a ton of choreography.  But, pairing her with Nick Jonas who is known more for his singing ability and not for his dance ability, and Liza Koshy who launched her career off of YouTube.  It’s a bit puzzling.  The word choice “creator” applies more so than “dancer.”

When the dancers need to pick-up choreography, they are not taught the steps by professional choreographers.  They are shown the steps by the Creators, and sometimes a special celebrity guest who is also not a choreographer.  For viewers and fans of shows like “Dancing with the Stars” and “So You Think You Can Dance” this is a hypocrisy that is difficult to overlook.  I mean, it’s a dance show.  The word “dancing” is in the title!  Yet, there are no choreographers! 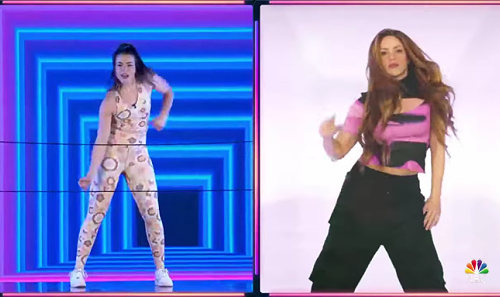 The twelve dancers (some of whom may be recognized from TikTok) start out in large cubes (or “pods”) lit-up with game show lights.  They are competing for a grand prize of $25,000.  These contestants come from all walks of life and professions.  Some examples include:  Food delivery driver, dance instructor, cheerleader, mom & daughter dancing separately, a dad type from New Jersey, etc…

There’s a live studio audience who vote for their favorites based on how well the contestants pick up the dance moves, and entertainment value.  The Creators finish off completion of the votes by voting in their favorite contestants who would have otherwise been voted out.  There are six rounds that contestants must get through to get to the final round where there’s only two dancers left.

Round 1 “All Eyes on You”: In the first round called “All Eyes on You,”  the audience votes the contestants down to 8.  Then the “Creators” add 2 of their picks to make the number 10 who go to the next round.  When the dancers don’t get enough votes, their cubes (“pods”) turn red.  Then after the Creators make their picks, the eliminated dancers get their pods closed.

Round 2 “Freestyle Battle”: The ten contestants go head-to-head in a dance-off.  But, they can’t see each other as they dance inside their pods.  They have to give it their all.  These ten get voted down to five.  Then, the Creators vote three more to move on, making the remaining total eight.

Round 3 “The Dance Along”: The next round Top row vs. Bottom Row (four vs. four).  The contestants are given a choreographed piece that they must learn and dance.  They are judges based as a group by rows.  So, they can affect each other’s votes.  Audience votes based on which row does better.  So, four contestants get voted through.  Then the judges vote to keep two more contestants which means six contestants move on to the next round.

Round 4  “Duo Collabs”: The six contestants are paired up into three duos.  It’s fun to see how when the contestants exit their pods to see what other contestants they are paired with and their excitement to see the reveal.  It’s apparent that the contestants formed bonds with each other prior to the taping of the show.  They had to learn a Salsa routine.  The audience votes for their favorite pair.  The Creators vote two more to move forward, not necessarily partnered together.

Round 5 “The Shake-Up”: The four remaining contestants dance a choreographed piece.  This includes a random prop, the “Shake Up.”  In this episode it’s a broom.  The audience votes and then the Creator decides which 2 move to the finals.

Round 6 “Be the Creator”/ THE FINAL ROUND:  The final two dancers have to do a well-rehearsed routine that they came up with prior to the tape day.  It’s not made clear that all of the dancers are required to come up with their own dance number that they must nail in the final round.  It seems that each of the dancers are told to do this while still at home prepping for game in case they make it to the final round.  The audience votes for their favorite dancer as the winner who receives $25,000.

“Dancing with Myself” premieres May 31st after the premiere of season 17 of “America’s Got Talent” at 10 pm ET.