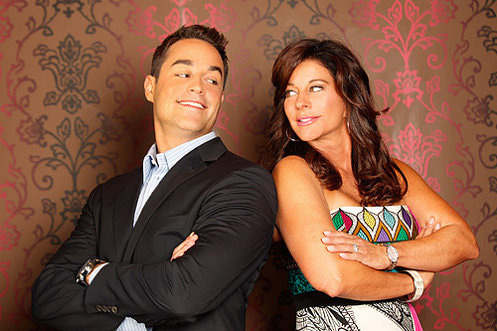 SET REPORT EXCLUSIVE! Spoiler Alert!
There were tears, yelling, tons of makeup and a lot of short skirts to the heightened real drama on the reunion show to VH1’s “Tough Love Miami”. The reunion show is an update to the dating show with expert matchmakers Steve and JoAnn Ward who returned this season to help eight single superficial ladies find non-superficial love. 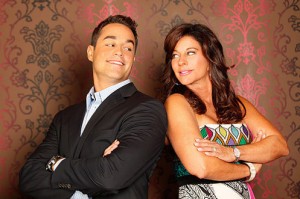 Hosted by Steve Ward, he advises women on how to act on a date and gives them an insight on what they are doing wrong to turn off Mr. Right in their daily lives. For one girl, Chasity Soules it was the fact that she is a Go-Go Dancer. She met a Mr. Right in Al, but didn’t want to give-up her dancing lively-hood. Al visited her on the reunion show to find out if she had quit her job. 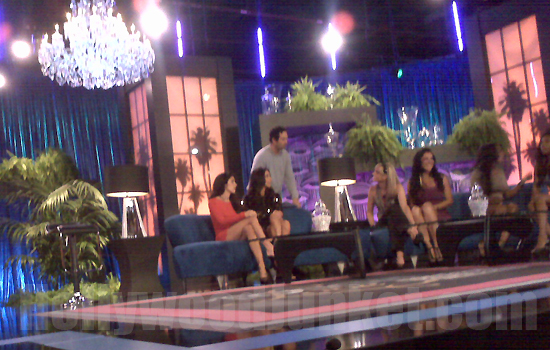 On the set of "Tough Love Miami" reunion show.

Ward was joined on stage by his mother JoAnn. She gave the warmest greeting to Michelle Betts whom she said she took under her wing the most. Steve proceeded to put each girl in the “hot seat” to revisit their worst moments on the show and to get updates in their dating lives.

Christine Streets, a former beauty queen, returned to the reunion show dressed in all red with “stripper” red shoes to match which got many comments from the other girls along with hair extensions and auburn hair color. Ward had her color her hair blonde and loose the fake hair to show her natural shoulder length hair on the show during the makeover episode. Christine revealed that she was still dating Frank from the show and that they have a lot of goofy fun together.

Watch our video interview below with Leilani Dowding:

Claudia Lopez, possibly the most transformed of all the girls, said she learned the most about herself (even though she left the show early) by being on “Tough Love”. During the reunion show, clips were shown of her when she wore a “fish net” type shirt during her sexy photo shoot. Lopez blamed a tantrum that Leilani Dowding gave when she wanted to wear a similar outfit as her- sleeveless white top (“wife beater”) with cut-off blue jean shorts. Claudia was successfully involved in a relationship.

Most of the drama and yelling from the cast came when the past episode involving the deceit from Jane Castro who was having an intimate relationship with her ex boyfriend, Alan, before coming onto the show. Avonte Wright, the oldest of the women at 37 years, confronted Jane and felt that she did not deserve to be there and accused her of only seeking publicity for her singing career. Castro tried to get back together with Alan, but it ultimately came to an end again. He said she was too focused on her singing. Castro said she wasn’t getting enough attention from him. He wished her luck via a video call and showed off a slimmer him.

Most of the women during the reunion show filming expressed their contempt for Leilani Dowding who they pegged as being the most self centered of all of the women and always wanting to get her way. Dowding said that she did find love with the man she was seeing on the show, George, and currently still dating him in a long-distance relationship. Her best friend from the show, Avonte gave her thoughts on it not being a real relationship!

During the reunion show, clips were also shown of Brigette Wartel while she was drinking at a party. Known for drinking too much and getting involved with men too soon, she rushed into a relationship with Anthony from a “Tough Love Miami” party which extended after the show. Apparently, Wartel stated he is “psycho” and didn’t want to see him again. When Anthony was brought onto the reunion show via a video conference call, Wartel yelled at him and talked about his “crazy” actions. She stated that she is currently in a healthy relationship with a man she’s been dating since then.

The best part of the reunion show came with an update from Michelle Betts whom dated a man on the show, Sam, that she was really taken with . He ended-up having a girl friend, so she broke it off. After he contacted her, she told him he’d have to visit her in order to talk to her. When he did, they were not able to patch things up. However, host Ward surprised Michelle by telling her that Sam was no longer seeing his girlfriend and brought him onto the stage so they could talk and work it out.

All, except one, of the ladies had a significant other in their lives that they were joined by on the reunion show and said that they learned a lot by being on the “Tough Love Miami” show.