TRANSFORMERS: DARK OF THE MOON – Stars Talk The Making-Of!

The third installment of director Michael Bay’s “Transformers: Dark of the Moon” held its global press conference and world premiere in Moscow.

Actors from the film and director answered many hot topics surrounding this highly anticipated summer action film. It is the first “Transformers” film in the series to be shot in 3D. A stretch since Bay had previously stated that the format was not compatible to his aggressive shooting style. This is a director best know for blowing-up things. Fun fact: 532 cars were destroyed in this movie. Why the change of heart?

Question 1: Why 3D?
Bay said that colleagues Steven Spielberg and James Cameron kept saying that he needed to shoot the movie in 3D. When Bay decided to make the switch, he said “it was hard taking it (3D camera) into the real world, in the streets”. The crew had to invent equipment to do so, such as strapping the camera onto sky divers helmets to achieve certain shots. 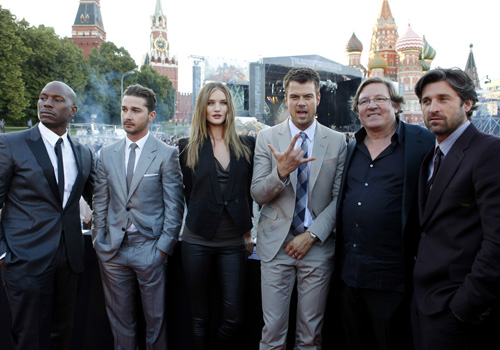 Fans will also see a different kind of Transformers movie in its style. “Bay stated, “I had to slow my style down a bit – made longer wide shots moving them through things” as well as making “shots unfold in a cool 3D way.” Overall, the director said that he loved using 3D and he thinks it works well in this movie.

Question 2: Megan Fox vs. Rosie Huntington-Whiteley:
Star, Shia LaBeouf was asked how he thought newcomer to the franchise as well as to acting, Rosie Huntington-Whiteley stood-up to former co-star and ex-girlfriend Megan Fox. His response was, “they are both great actresses. They are both great at their job. I enjoyed Megan when she was here… These two people have completely different energies.”

As for the fans of the film, LaBeouf stated that by bringing-in a new character to this installment, it gives a fresh perspective to the transformers. “You have a fresh set of eyes in Rosie and what that does is makes Sam (LaBeouf’s character) more heroic.”

Question 3: Will it be better than Parts 1 & 2?:
The last burning question that was asked was regarding the many critical pans that the last Transformers movie received. Some had even labeled it “the worst movie of the year”. How does that change this one? Bay eluded to that question that he was also a bit disappointed by the second Transformers. “We had a writers strike during movie two. On the third one we really tried to get it right. It’s the best of the three. This one I think really delivers”.

Audiences will be able to see for themselves when “Transformers: Dark of the Moon” opens on a rare early release date – Tuesday, June 28, 2011.