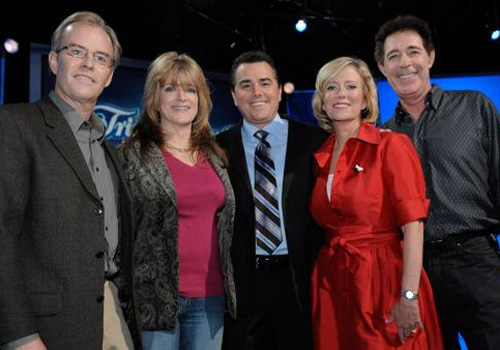 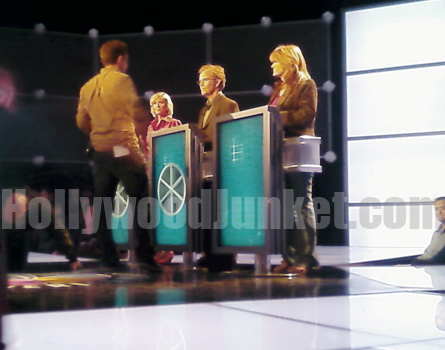 “Brady Week” is a five day event that will have five of the six children (Knight included) from the 1970’s series, “The Brady Bunch” playing “Trivial Pursuit”. The first four days features one Brady child per game as “America’s Team Captain” at their own designated podium and representing “The Brady Bunch” trivia by asking questions to regular contestants (non-Brady’s that is) pertaining to a special “Brady” category on “Trivial Pursuit” for the whole week.

On the fifth and final day of “Brady Week”, all five of the Brady children will be playing the game together. Three at the contestant podiums side-by-side against each other, one at “America’s Captain” podium, along with Knight hosting.

All winnings earned by the final round “Brady” winner were donated to charity.

They all took turns as Team Captains during the week. But Barry Williams (Greg Brady) was the Team Captain for the final game where they all played. Williams brought with him on stage, the original “Tiki Idol” from the Brady’ Hawaii episode. He said it was to distract his TV siblings and wish them bad luck.

Eve Plumb (Jan Brady) proved to be especially competitive, blurting out “F*@$!” upon frustration of not being able to buzz through on a question she knew due to Mike Lookinland (Bobby Brady) buzzing-in at the same time.

Host, Knight, seemed a bit more relaxed since the first show taping I attended, and even comfortable at mixing it up with a little bit of Improv during the game.

For those of you who haven’t been following the television version of this game, here’s how it’s played:

During the first round, three players compete by answering trivia by “America” or random people asking their question via video. First player to get three wedges first, automatically moves-on to the next round. Something folks at home may not know, this contestant awaits in the audience, not off-stage.

In the second round, “the hot pursuit round”, the two remaining players compete to get three wedges the quickest. Whomever answers a question to a category correctly, gets to automatically answer the next question. If that question is answered wrong, the next question is an “all answer” question meaning, anyone of the two contestants can answer.

In the third and final round, the remaining player left has to answer whatever questions are thrown at him/her after the categories are systematically shuffled. This contestant must beat “America’s” total in order to win the game. For each wrong answer, the money goes to “America”. If “America” wins, the money is split between the people who participated in asking the questions during that particular game.
Categories in the final round are worth: $500, $1000, $2000, $3000, $4000, and $5000