Press was invited to Walt Disney Studios in Burbank today to get the preview of what movie going audiences who obtained free tickets weeks in advance to preview 20 minutes of 3D scenes from TRON: LEGACY, opening in theaters December 17th.

A Walt Disney representative stated that the scenes will be shown in 48 countries today that started in Australia and the UK which “went off without a hitch”. People in Virginia started lining-up at approximately 10am this morning.

The tickets were made available on October 10th. According to the representative, tickets were gone in five minutes. There will be one show of selected 3D scenes from TRON: LEGACY playing at all IMAX locations today. The first scene is shown in 2D with the rest of the scenes in 3D. 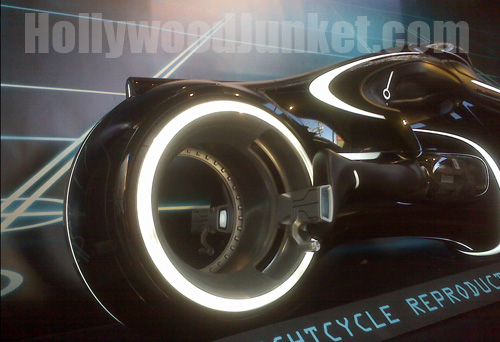 Viewers will get a clear idea of the storyline, along with the look and tone of the film. The first scene begins with the son of video game software author/arcade owner from “Tron”, Kevin Flynn (Jeff Bridges), Sam (Garrett Hedlund), who is approached by Kevin’s colleague (Bruce Boxleitner) to motivate Sam to keep searching for his father. Sam follows his suggestion and ends up being transported into the updated world of arcade video game “Tron”. His conquer and escape from deadly games returns him to his father, Kevin at his “safe house”.

The combination of scenes shown together gives audiences enough of a teaser to want to see the full film. Fans will be pleased at how director, Joe Kosinski has brought the technology from the first film up to futuristic date concerning the visual photographic aesthetic of the film and the gadgets.