One Judge Down on AMERICA’S GOT TALENT Season 17 Sneak-Peek!

It’s one week after the “American Idol” Disney performance show, and producers made sure that viewers got to see Katy Perry’s fall out of her chair once again.  The replay of her fall was shown at the top of the show.  It was explained that the online video of her fall got 3 million views.

Host Ryan Seacrest had a bit of unfortunate news which was that two contestants tested positive for Covid-19.  They were Fritz Hager, and Noah Thompson.  They performed from their hotel rooms, with the exception that Fritz’s rehearsal video was shown for his first performance song of the night.

Seacrest also announced that the show would be doing the first TikTok duet challenge which fans will vote on in the upcoming week.  The Top 7 on Sunday’s show got mentored by Black Eyed Peas Will.i.am for their first performance of the night which was a TikTok song. They had to choose their favorite original song, or a song popular on TikTok.  In the second round of the episode, the Top 7 sang dedication songs to their moms.

SPOILER ALERT:  At the end of Sunday’s show during the Top 5 reveal, Seacrest said the Top 5 would go on to be mentored by past “American Idol” winner Carrie Underwood in Las Vegas.  Two of the Top 5, Noah and Fritz, have Covid.  So…how will the show work it out?  Are they going to be mentored via Zoom?

LEAH MARLENE performed first.  She was followed by JAY who performed a Whitney Houston song.  He said he’s seen the song a lot on animal videos, which he loves to watch, on TikTok.

FRITZ HAGER chose “All My Friends” for his song.  Will said he likes Fritz, “he’s an emotional one.  High IQ on emotional intelligence.”  When Will learned that Fritz didn’t go to college, he said “good,” and  “if you drown in someone else’s formula, then where’s your origination”?  Then, Will compared Fritz to Sting – a weird talent.

Fritz’s rehearsal was aired, and he took the judge’s comments via Zoom from his hotel room.  Luke said it’s good that they do a lot of rehearsals.  Fritz said he’s just been laying in bed sleeping all day.

CHRISTIAN GUARDINO sang “Lonely” by Justin Bieber & Benny Blanco.   He put it on TikTok, but took it down because he wasn’t proud of his voice.  Lionel told Christian that he wasn’t born “broken.”  He was born “unique,” and “the reason you’re on this stage is because you’re unique to this planet.”  He added “I love what you’re doing, just stay on course.”

Ryan showed Christian a video message from Michael Bubble who congratulated him on his performance of “Circle of Life” last week.  Then, Bubble  invited himself to sing with Christian at the “American Idol” finale.

HUNTERGIRL chose “You Broke Me First” by Tate McRae on TikTok.  Will.i.am told her to bring every emotion to the song. Huntergirl said he gave her the best advice she’s gotten.  Katy reacted to her performance, saying that she’s proud that everyone is using the stage and Hunter Girl is becoming the artist that she dreamed of.

NOAH THOMPSON also tested positive for Covid and performed from his hotel room.   His roommate signed him up to “American Idol” as a joke. Noah said he’s not on social media and isn’t sure what hashtags are for.   Noah chose the “Painted” song from TikTok.  He got a standing ovation from the judges.  Luke said “American Idol is so good at finding stars.  They’re stars whether they’re on the stage and they’re stars if they’re sitting in a hotel room with Covid.”  Noah said it sucks and it’s his first time having Covid.  He’s getting through it.  Luke called it one of Noah’s best performances.

NICOLINA – Seacrest said they all call her the TikTok queen.  She said she got to hear new artists she had not heard of before on TikTok.  Will and Nicolina made a TikTok video.  She sang “Alone” by Heart.   Will said she has skills and she hit the emotions and the notes.

JAY had a picnic with his mom.  He chose “A Song for Mama” by Boyz II Men for his Mom.  He said it reminds him of how much a mother gives to her child.  “I hope this song not only touches her, but touches everybody out there.

Katy said, “the growth for you has been phenomenal,” and he’s found exactly who he is, never going to go back. “Instant identity.”  Luke added that a few weeks ago there were a lot of those runs that weren’t there but he’s hitting them perfectly now.  Lionel said he’s got his timing right and his stage presence.  But, if he goes into his closet and gets his jacket…referring to how flashy Jay’s jacket was, similar to his style.

FRITZ sang another original song to honor his grandmother.  Luke reacted, “you look like a pro, you sound like a pro.  An amazing performance.  Lionel said Fritz is a singer/songwriter, “your star has arrived.”  Katy told Fritz he’s a combo of bright eyes and James Tayler.  “You continue to shock me and blow me away,” she finished.

Lionel Richie is being inducted into the Rock Hall of Fame for the class of 2022.  The show presented him with a big cake shaped as a record turntable which was rotating.  He cut a slice and fed Katy a bite, and he took a bite from the same slice.

LEAH – she’s honoring her mom through her song “Sanctuary.”  Leah said her mom has always supported and nurtured her.  Leah said and the fact that she has all those songs online is every singer’s dream.

Lionel said her storytelling is strong.  She found that place, she found that center and can take that and make the greatest career.  Katy told her she’s “mature and graceful.” She looks like an angel and sounds like an angel.   Luke said it’s exciting to know how long she’s going to be able to perform in front of audiences.

HUNTERGIRL sang “Like My Mother Does.”  She wanted to dedicate that song to her mom because she always wanted to be like her when he grows up.   Katy told Hunter that she still deserves the Platinum ticket today.  Luke told her great song choice and great performance, “it was beautiful.”  Lionel said at this point of the show, she has him crying and the audience crying…”you did a fabulous job.” 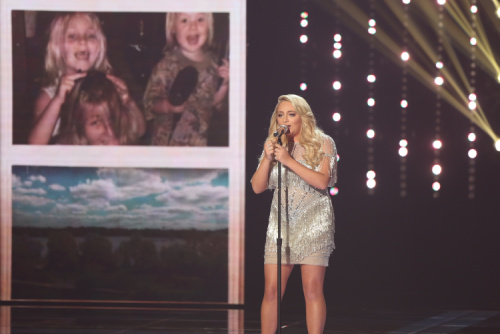 NOAH dedicated his song to his grandmother.  His parents got divorced when he was little and he was raised by his grandmother.  He sang “Landslide” by Fleetwoold Mac because he has a memory of his grandmother crying when she heard that song on the radio.
Luke said he sounds great and, great vibes in that hotel room where he’s quarantining.  Lionel said when he’s sick, he sounds great, that gravelyness and Noah sold it.  Katy said the adrenaline took over and Noah is doing the best tonight in her opinion.

NICOLINA – Her Nonna has been a big influence.  She sang “Light in the Hallway” by Pentatonix.  She loves that song.  Lionel said it was flawless.  Katy said it feels like this is Nicolina’s stage and told her that both performances were “A plus.” Luke agreed with Lionel that it was “flawless.”

CHRISTIAN – his soulful dedication song “Dear God” to his mom Beth.   That song, his mom said, is her “go to” and her reminder every day “just to be grateful” because she remembers where they come from.  Christian said “the words of that song is about rising up and pushing forward.”  He said his family has always done that.

Both Katy and Lionel reacted that the song was done so well it was second nature to Christian.  Lionel said the song was “pouring out of your skin, it was second nature.”  He joked for Christian to sit around his mom more because that’s what he’s channeling.  Lionel said he is going to ask for a family root check.   He added, that was the most incredible, felt performance ever coming out of his mouth.”

Noah and Fritz were streaming in via monitors on stage behind everyone else. Host Seacrest stated “in no particular order,” the first person to make it into the Top 5 was: Noah Thompson!   Next was Nicolina.  Then, HunterGirl.  The fourth artist announced was Leah.
Jay, Fritz, and Christian were left vying for the last spot in the Top 5.  That spot went to Fritz.  That meant Christian, and Jay went home.

Seacrest said next up, the Top 5 would have a mentoring session with past “American Idol” winner Carrie Underwood in Las Vegas.