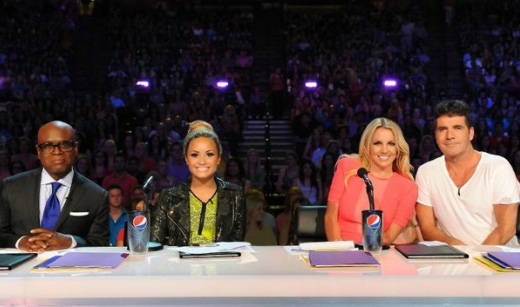 FOX’s singing competition show “The X Factor” has been searching high and low for stellar singing talent to place in the second season. The judges- Simon Cowell, L.A. Reid, Britney Spears and Demi Lovato have been visiting city after city to watch what each city has to offer. But when they got mid-way into the auditions in Greensboro, North Carolina one hopeful displayed a stage act that was too much for three judges to take left Simon alone! And Simon has a new female judge to banter with!

In a backstage interview with judges Redi, Spears, and Lovato talked about this unexpected auditioner in “The X Factor USA” video below:

Greensboro has been amazing. The talent has been spectacular” said Lovato, and Reid commented that “this audience is so alive. They make so much noise” Britney had to put her fingers in her ears.

Reid explained the situation of the bad audition as “He thought that he was going through. He thought that the cheers were because he was doing such a great job. The truth is that he was horrific. We just couldn’t take it anymore. Simon has a little bit more tolerance, more patience than we do so we (pointing to Lovato and Spears) walked and we let Simon handle it by himself.”

Lovato said about the failed contestant, “I felt uncomfortable. He’s on the floor crying because he thinks he did a great job!” Spears said that she followed Lovato because it was time for lunch anyway.

Lovato described her judging style – “I just speak my mind. Sometimes I’ve been called the toughest judge. But I can also be really nice and It’s all about having fun. When Simon and I banter back in forth it’s all in good fun. He’s really witty”.

L.A. Reid was on hold while Simon Cowell was stopping by Jake’s Diner having “grits” – a Southern breakfest staple. “I waited, and waited, and waited,” said Reid. In Cowell’s return, Reid stated that Cowell did not bring him any.