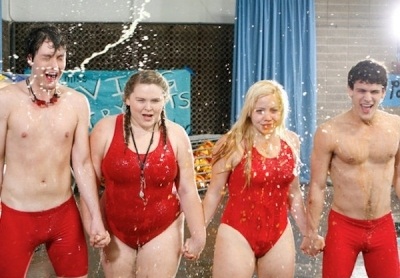 NEW YORK – July 10, 2012 – Oxygen’s “The Glee Project” adds “Glee’s” newest star, Grant Gustin, and series regular, Dianna Agron, to the list of guest mentors on the critically acclaimed series. Grant Gustin (Sebastian Smythe) comes to the classroom for “Theatricality” on July 17 while Dianna Agron (Quinn Fabray) introduces the newly created theme of “Actability” on August 7. Gustin and Agron round out the list of previously announced upcoming guest mentors for season two of “The Glee Project,” which include “Glee” stars Amber Riley (July 24), Darren Criss (July 31) and Chris Colfer (August 14). “The Glee Project” airs every Tuesday at 10 PM ET/PT with Jane Lynch making an appearance as the guest mentor on tonight’s episode for “Fearlessness” week.

On Tuesday, July 17, one of the newest Dalton Academy Warblers, Grant Gustin, brings a piece of his “Glee” character to “The Glee Project” classroom for “Theatricality” week. Gustin was discovered by casting director and on-air mentor of “The Glee Project,” Robert Ulrich, while he was performing in the first national tour of the Broadway revival of “West Side Story.” With a strong musical theater background, Gustin gives sound insight into his personal experiences and inspires the remaining contenders to play up their theatrical sides during the main challenge.

Then, on Tuesday, August 7, Dianna Agron talks about her “Glee” character for the newly created theme “Actability.” Agron’s role on “Glee” has been a staple figure throughout the series and she has had to adapt to some of the most difficult life situations in order to play a teenager on-screen. Agron shares her unique experiences with the remaining contenders as they prepare for their biggest acting challenge yet.