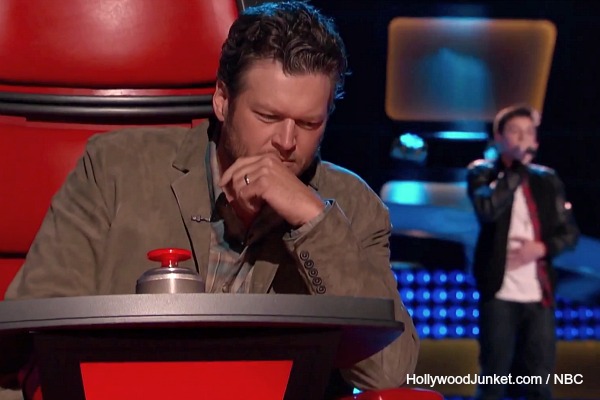 It’s the final night of “The Voice” Blind Auditions. Each coach has only two spots left to fill their teams. In tonight’s episode, finally new coaches Gwen Stefani and Pharrell Williams have to fight it out among themselves over one artist. But, Gwen doesn’t fight harder for a contestant than when she goes-up against Blake Shelton. Gwen said she is already planning to steal a contestant or two from Blake later in the competition!

He’s 23 years old. Him and his sister were raised by his Mother. He teaches voice, guitar and drum lessons to children.

Coaches Comments: Adam told Matt, “I feel like I was seeing a really unique, talented artist up there.” Adam also told Matt that he’s something really special. Blake said, “Even when your voice is soft, it’s still really intense.” Adam said his best quality is that it’s “genreless”. Pharrell said he’s been waiting for an artist like this. Matt picked Adam for his band experience and guitar.

Beth is 30 years old and works in pediatrics. She’s been singing her whole life but there’s not a lot of music opportunities in North Carolina. She travels to Atlanta to sing. She was helping her family when her Dad who was in an accident where his leg was demolished. Beth helped him until he recovered.

Coaches Comments: Pharrell said, “you’re an effortless blend a lot of influences.” He said “I have soulful singers, but I do not have you!” Adam said “I can make the absolute best version of yourself.” Gwen told Beth “your range is crazy”. Then she pointed out that she’s the only girl coach. Gwen argued that they will do “some really fun stuff” and offered to hook her up with clothes. Gwen pointed out that Beth is wearing leather overalls. Blake said he wears overalls at home all the time. He told Beth “you are meant to be on Team Blake. That is the right decision.” Pharrell told Beth that he’d stand-up for her the whole time. Beth picked Adam. She said she can’t wait to see how Adam shapes her in the competition.

Her grandfather influenced her musically with songs from the 40s and 50s. He bought her a guitar and with a camera, she started posting videos on YouTube. She sang a jazzy song that set her apart from the other contestants at the Blind Auditions.

Coaches Comments: For the first time Pharrell and Gwen have to fight it out with each other for an artist. Blake said “They’re going to nice each other to death.” Adam said “they will fight with rainbows and cotton candy.” Pharrell told Brittany that he’s never seen anyone embrace a jazzy tune like that and that her uniqueness will lend herself in favor. Adam said watching Pharrell and Gwen was like watching a “candy cane sword fight”. Gwen told Brittany that she will try to steal her away from Pharrell eventually if she goes with Pharrell. Brittany chose Pharrell.

Griffin said him and his siblings would play on pots and pans. Griffin wanted to go to Nashville when he was 12, but his family could not afford it. They were very poor he said and he’d try to raise money to help his family. After high school him and his sister opened a business selling bow-ties. They made enough money for him to move to Nashville. But he currently has a desk job.

Coaches Comments: Blake said he loves Greenville, SC and Nashville and said he used to play at the Saloon there. Blake said there are so many elements that Michael Buble does that is in Griffin. Pharrell said he wasn’t familiar with the song Griffin sang, but he’s “adaptable”. Griffin told Gwen that she’s very beautiful. Gwen told him his voice is “so rich” and it would be fun to work with him. Griffin chose Pharrell. Pharrell said baritones are rare and Griffin is a great baritone.

His mom is an Opera singer and teaches from their house. He’s always performed in A cappella and choirs. This is his first time singing on stage solo he said. Ryan considered engineering until his music video went viral on YouTube.

Coaches Comments: Blake said Ryan’s “a cool dude.” He also said, “There’s something laid-back and valuable” about him. Blake told Ryan that he has no one on his team like him. Gwen said she doesn’t have many men on her team. She said she’s looking for something that she doesn’t have. Ryan chose Gwen because she turned first and he’s a big fan of hers.

Mayra is 26 years old. Jake Worthington is from her hometown. Jake made a video for her wishing her luck at her audition. She used to sing with the church quartet and sang on Christian television. She said she’s on The Voice because of her dad. She sang “Human Nature” by Michael Jackson for her Blind Audition.

Coaches Comments: When she told them she is from La Porte , Texas, Blake pointed-out that Jake Worthington who was on his team was second runner-up. Gwen said, “You are such a beautiful singer. You have so much range. Your voice is light and fluffy” and said she could learn from Mayra. Gwen pointed-out that Blake is a man. Blake asked her to please be in his family. Gwen said Blake is looking for family members, she’s looking for stars! Adam told Blake that he got served!

From Venezuela, 17 year old Fernanda works with the Special Olympics. She said it’s rewarding, but also wants to work with her music. She formed a band called “Music Lab.” Fernanda said about The Voice, “having the right coach means having the right guidance”.

Coache’s Comments: Gwen said she was also a swim teacher when she was 17. Gwen said her and Blake share a liking to similar voices and plans to steal some of his singers later. Fernanda said she doesn’t listen to country, but watches “The Voice” and knows that Blake is a great coach.

15 year old Justin said his inspiration was NSYNC boy band. He sang A cappella with his friends. His The Voice blind audition will be his first major performance. Justin said he’s been singing on YouTube too. He sang “Let Her Go” for his Blind Audition.

Coaches Comments: Blake was shocked when Justin told him that it was his first time performing in front of a crowd then super excited when he told him he’s 15 years old. Blake’s coaching specialty is teenagers. Blake told Justin that there are lower registers in his voice that Adam won’t have when he’s 90 years old. Pharrell told Justin that he’s going to the right guy. Blake held-up a T-shirt that said “Blake’s Boo” and gave it to Justin. Blake said he’s been waiting to give the shirt to his last contestant.

Evan Watson – Evan opened a brewery and works for himself with his wife. He said he’s been wanting to be a musician his entire life. After college, he was a one man band, and soon made a self-produced album. He left the music business for lack of consistency. Evan sang “The Night They Drove Old Dixie Down” for his Blind Audition.

Blake told Evan “you interject about 50% too much of the growl.” Adam said if he can do what Joe Cocker does and learn to control it, he will do well. Gwen said “use it tastefully at the right moments.”

Aaron Kim – Aaron is from Los Angeles, Ca. His father influenced him deciding to take-on music. He plays acoustic soul, Hip-Hop . He said Taekwondo has taught him a lot of discipline. Aaron sang “Latch” for his Blind Audition he said which has “a sexy falsetto”. He wants to work with Pharrell,.

Gwen said Aaron’s voice is too far away from the melody. Pharrell said the arrangement is so different. Blake said he loved it and was so close to pushing his button, but Aaron had a pitch issue. Adam had the best excuse which is that his team is full.

Chandra – She said she’s played the county fair and has an obsession with Batman and drives around in a Batmobile. She said being a country musician would be huge that is what she is suppose to do. She sang “Hard to Love” for her Blind Audition.

Gwen said she couldn’t place what kind of singer she wants to be. Pharrell said when she comes back, “pick a song that makes your voice stick-out.”