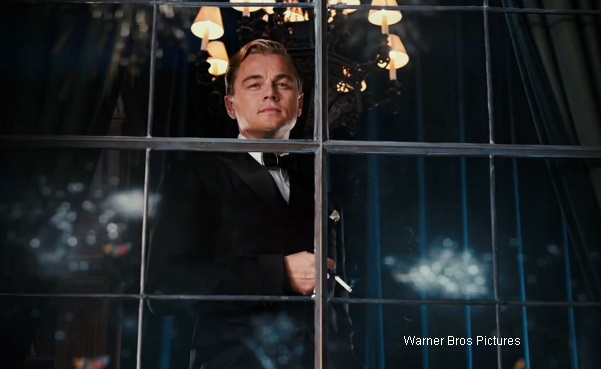 “We can all relate to that dreamer in Gatsby. Each one of us gets excited with the prospect with somebody that has that much ambition” – Leonardo DiCaprio (Jay Gatsby)

The Jay-Z, Kanye West connection to THE GREAT GATSBY:
Jay-Z is not only an Executive Producer on the movie, his music also worked it’s way into the creating of one of the scenes. When the time arrived to shoot the big party scene in “The Great Gatsby”, Luhrmann said at about thirty minutes from wrapping, they still hadn’t gotten that “wild party feel.” The scene was inspired by a book called “The Wild Party” which was a book given to Luhrmann by DiCaprio’s father, George. The book was written in the same period as “The Great Gatsby”. To help create the atmosphere, Luhrmann had his assistant dress-up as the bell-hop that brought sandwiches in the book. With twenty minutes left, all the cameras rolling, jazz playing in the background, they turned up the track called N.I.P. by Jay-Z & Kanye West and it was mixed with the jazz. “We made a special track” said Luhrmann. The result – a very expensive lamp smashes right in the middle of the movie. “There was clothes coming out and feather fighting and throwing flowers,” said Luhrmann.

Baz Luhrmann was turned away:
Producers Douglas Wick and Catherine Martin stated that it took two years of negotiations with A&E for the rights of “The Great Gatsby”. A&E held the rights due to a movie that they had made from the book. While agonizing how to make the movie feel contemporary during a meeting at Sony lot, apparently Baz Luhrmann stopped-by, but was turned away by the front desk. Douglas said “the hardest part of casting is what film maker in the world could ever make this movie and make it feel about now.” He couldn’t believe the fact that, that film maker had come and knocked on the door only to be sent away. Douglas said, “Baz Luhrmann came to visit us to see if he could stand working with us.”

Australia for New York:
The making of “The Great Gatsby” had to come in on budget. The only way Luhrmann and his team could do that was to re-create Long Island in Australia. “The whole challenge was to make the movie in Australia. That brought a bit of a weird problem that we could have never foreseen. There was this English mountain that people went up and planted trees. We were going to create Long Island up there. We got rained out five times… We shut down, came back in February and it rained again,” recounted Luhrmann.

DiCaprio said, “for budgetary reasons, we shipped the whole production to Australia. What was amazing was the incredible enthusiasm and work ethic of all the people there. It infused us with this great energy. Every actor there except three or four were Australian. I really admired at how passionate everyone was about having this production there.”

A true collaboration:
When talking about the cast of “The Great Gatsby”, Luhrmann stated, “We were a theater company. It was a true collaboration that began extremely earlier.” He also said that every actor that was brought in began collaborating in the process. They’d ask – “do you think I can get that line in?” The lines he said they were referencing were those from the real-life letters from Zelda Fitzgerald to Scott, and letters from Ginevra King, also to Scott.

The future is endless:
DiCaprio said of the book, that it predicted the great crash in the early 1930s in America. “The idea that the future is endless and that we can keep consuming and living the way that we do without consequences. It’s an eighty-year cycle that we’ve encountered again. It’s not just an American novel, its something that’s happening, but worldwide. The great pursuit of wealth. It’s a timeless novel in that regard.”