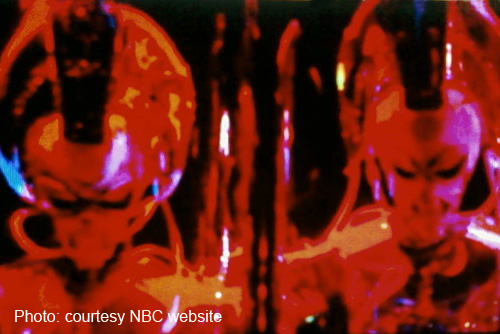 Last night’s episode of NBC’s “America’s Got Talent” brought unpredictable reactions from judges, one of which included a standing ovation from difficult judge, Piers Morgan, aliens on stage; fire; and a strip tease!

Video interviews with judges and host who talk about talent acts below:

We were present on the set and one thing you didn’t see on last night’s show was a pre-tape of the judges intro due to the extensive set-up that was required for dance group The South Philly Vikings. 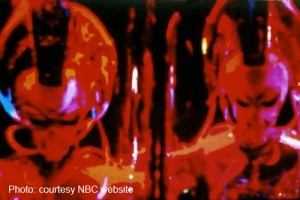 “The South Philly Vikings”, a dance group consisting of truck drivers, and other blue collar workers from from Philadelphia made a tribute to Star Trek, Mars Attacks!, and The Fifth Element by dressing in costumes displaying characters from the films. Judge, Morgan gave them a strike, and stated that they were like “overgrown costumed kindergartens”. Prior to their performance, the group stated that they were performing a routine that night done in three weeks of preparation that would normally take one year.

An AGT judges favorite was child rapper CJ Dippa. He performed an original rap and impressed the judges with his ability to command the stage.

Contortionist/gymnast Polina Volchek received a strike also from Morgan. She attempted to wow judges with body tricks and playing with a “rope”. She received props from Osbourne.

Hip hop dancer/popper, Haspop had Howie saying “That’s WOW! Loved it!”, and Piers stating, “The best performance of the night so far”, with Sharon agreeing.

Talent acts that didn’t do so well included Luigi whom would do well if it was “a normal season” according to Morgan who striked him as well as Chipps Cooney who opened his routine with former judge’s David Hasselhoff song then proceeded to strip down to his underwear. Morgan stated that it was the worst performance in AGT history! He was the only act of the night to receive strikes from all three judges. 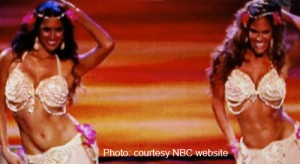 The last four acts of the night were the most impressive. Kaya & Saddie managed to have all three judges swooning over their gifted body skills with their hypnotic belly dancing talent. Jeremy Vanschoonhoven gave a great bike stunt show that ended in a tricky blind-folded finale. Singer, Debra Romer proved to show her confidence on stage and sang a beautiful song that left Morgan compelled to give a standing ovation! Finally, the night’s acts wrapped with Studio One Young Beast Society dance group that left Howie saying they are the “best dance crew performance I’ve seen on this stage”. Morgan agreed. Watch the acts here:http://www.nbc.com/americas-got-talent/video/categories/season-5-highlights/1231785/