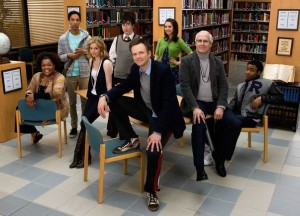 Members of the cast from “Community” were interviewed about future projects and asked how they were enjoying the San Diego “Comic Con”. Jillian Jacobs (Community) spoke about her interests in DC comic’s feature film (unnamed) and that her favorite comic character is “Martian Manhunter” after reading about the character origins.

Danny Pudi, also on “Community”, showed off crazy dance moves while being interviewed about the show that made him a house hold name and its upcoming season. Proving that on and off camera Pudi is an entertainer by trade.

Summer Glau, from NBC new show “The Cape”, kept a gentle composure while talking to friends on polka dot couches; acting more as a “guest” than a celebrity. “The Cape” debuts in 2011.

When asked about the crowd and its famed attendees, the bartenders said that everyone was friendly and respectful. Showing that egos were something of a lost entity surfacing only in tabloid magazines and emotion filled interviews.