MOST POPULAR: Audience is Part of the Show!

The game show that humbles many adults for their lack of knowledge of basic school subjects such as mathematics, science, history, geometry, and English is joining day time syndication, â€œAre You Smarter Than a Fifth Grader?â€ The show was sold to Warner Bros. who will air it on multiple stations, five days per week, twice per day. One network being, CMT.

The set looks the same as the prime time set. The seating has been limited to a smaller number of audience members and no balcony, where the prime time version did have a balcony for audience.
Daytime set much the same. Above photo: Billy Bush from a previous prime time season. No word yet on if celebrities will be brought into the day time version. 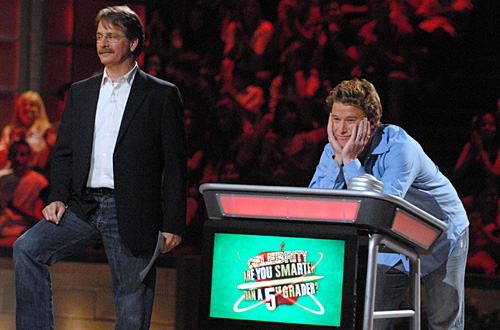 Host Jeff Foxworthy, in person is very down-to-earth, and oddly enough does have a teacher vibe/presence about him on stage. He joked with the audience, signed autographs, and even recited some of his â€œredneck dictionary wordsâ€ for a fan. Then told the story of how his book of the play-on-words came to be. He stated that he initially thought heâ€™d only be able to come-up with about twenty, but it soon turned into about two thousand.

The format is different, and the time frame is one half hour. Contestants come out to the stage to roll through ten topics given to them on a monitor â€œchalk boardâ€. Contestants are allowed to bring up to four supporters who consist of family and friends to sit in the audience adjacent to the stage to cheer them on.

The fifth grade child actor, students on-stage that are there to play the game with contestants now consist of only three children versus five from the prime time show. Two different groups of three children are rotated from the morning shows, and the afternoon shows. So, no same children are there for any one whole tape day.

How The Game is Played:

There are ten categories on the board. The top two are the hardest questions, being â€œFifth Gradeâ€ level questions, and worth $5000 each. The next two are â€œFourth Gradeâ€ level worth $3,500 each; â€œThird Gradeâ€ at $2,500; â€œSecond Gradeâ€, $1000 each; last two are â€œgimmeâ€ questions that are â€œFirst Gradeâ€ level at $500 each. A total winnings consisting of $25,000 that can be increased to $250,000 after being multiplied by ten if the contestant answers the â€œBonus Questionâ€ correctly.

If at any time, the player gets an answer incorrect, they lose all of the money they had earned up to that point. The only exceptions are the following: They get a $5000 question wrong, but the fifth grade student gets it correct. The contestant still earns the $5000; the contestant can choose to use their â€œsaveâ€ safety net option and if the fifth grader gets the answer correct outside of the $5000 question, the money is still earned.

The other two safety nets contestants have are â€œcopyâ€ and â€œpeekâ€. If a contestant chooses to use their â€œcopyâ€ option, they must lock-in the answer the fifth grader wrote down without seeing it first, and thatâ€™s the answer they play. If they use â€œpeekâ€, then they can take a look at what the fifth grader wrote for an answer and decide whether or not they would like to lock it in as their answer.

At the end of their defeat, contestants must still look into a camera and admit verbally, â€œI am NOT smarter than a fifth graderâ€.

The filming of the show is very fast-paced and organized. There seems to be a large fan-base of the show. Sundayâ€™s afternoon shows filled-up, having to turn some audiences away!

As far as contestants, no word yet on if celebrities will be brought into the day time version to play.