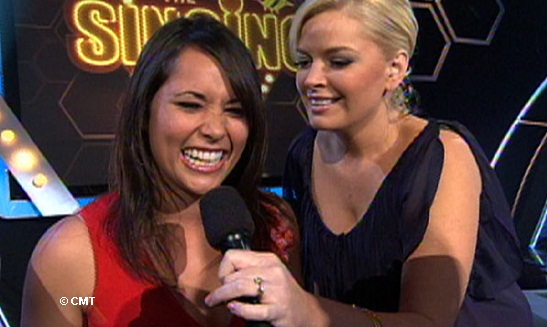 The karaoke match-ups, “The Singing Bee” on NBC, and “Don’t Forget the Lyrics” on FOX battled it out for the first two seasons. Then, “The Singing Bee”, hosted by former “Back Street Boys”, Joey Fatone, got canceled. Now, the show has been given new life by CMT (Country Music Television) , and revamped into a country honky-tonk! That other karaoke, celebrity-driven, game show..well, unless it is too picked-up by another network, looks like it won’t be coming back. 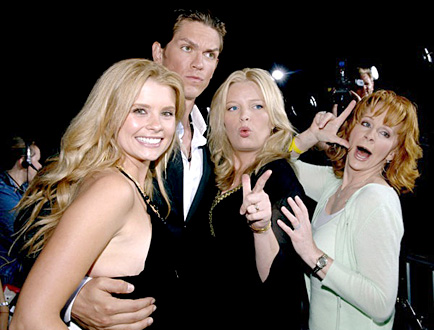 The CMT network has re-branded “The Singing Bee” as a country-western fan-based music-fest. The contestants on the show, are very knowledgeable of country music, and play the game fairly well. One contestant even winning the grand prize of $10,000! The show is about sixty percent country music, and the rest with a mixture of pop-music, and a little bit of rock. No “Honey Bees” on this stage. Just, a “Bee Hive” of a big band that consists of about six vocalists, and bassist, a drummer(whom the host comically flirts with overtly), and, guitars. Band leader,composer, Steve Dorff created the show’s theme song, and wrote these lyrics for it: “There’s a party going on. Clap your hands, sing a song. Cause there’s a great big party going on!”

The new host, Melissa Peterman, from WB sitcom “Reba”. Peterman as a host is a good fit. However, hosting in itself, limits her comedic abilities. While on stage, she is consistently channeling her “Reba” character, “Barbra Jean” with egotistical stints such as creating her own catch phrase song by the “Bee Hive”, and teasing the drummer with onstage antics such as bending-over. These are all “Barbra Jean” type characteristics.

How the Game is Played:

Contestants must claim a seat in the karaoke game by correctly finishing song lyrics. The same song replays until someone gets it right. Then they move on to a new song. Once all six seats are filled, the next round begins.

In the second round, each player must finish a verse in a song by unscrambling jumbled song lyrics on a big screen, and sing it. Players earn five points per correct word in lyrics.

Round three is called, “Singing with the Enemy”. Contestants are forced to pair-up in teams of two, creating three teams altogether, and must finish random lyrics to a song. They earn five points per correct lyric.

In the fourth round, “Karaoke Challenge”, remaining players get to pick a song according to the release year and song style. Contestants must finish correct lyrics after the “Bee Hive” is done singing it.

Two players are left by round five, called, the “Chorus Showdown”. Two remaining players are given the chance to complete the correct lyrics of a song. The fist player to correctly complete a song, goes on to the final round! While on set, I witnessed a rare incident where the producers of the show actually had to call a tiebreaker because the players had gone on for so long without giving any correct lyrics. They had to face off by using a buzzer at a clue given to them. They could choose to complete the song, or pass to their opponent.

The last and final round is, “Final Countdown”. Here, the last contestant must get seven songs correct to win the “Singing Bee” trophy, and the grand prize of $10,000!

The show is somewhat more enjoyable than “Don’t Forget the Lyrics”, and more interesting than NBC’s version of “The Singing Bee”. Will country fans become fans of this new show? We’ll see when it premiers on CMT this summer.