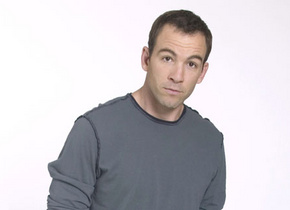 Comedian and actor, Bryan Callen is host of “Bank of Hollywood”.

Filming of a new type of game show, “Bank of Hollywood” wrapped a month ago. The show premieres tomorrow night at 10pm on “E!” network, and is hosted by the adorable Bryan Callen (MADtv, Sex in The City, Entourage, Fat Actress).

A slew of contestants come before them at their “thrones” which sit on a separate raised stage to put in their requests of different money amounts for either a specific cause, event, or perhaps a new business venture. Eight contestants appear per episode. HOLLYWOOD JUNKET sat-in on several episode tapings. Our full report on this show from a previous post here: https://hollywoodjunket.com/2009/11/01/bank-of-hollywood-taking-money-requests/

A lot of readers have contacted HOLLYWOOD JUNKET with their own stories to put in front of the “Bank of Hollywood”. We will post the show’s next rounds of casting on our website as soon as we get word.

SPOILER ALERT! SPOILER ALERT!
Here is a sneak-peak to what viewers can expect to see on “Bank of Hollywood”: Contestants included a woman asking for $31,000 to start a dance class. A young woman whom was without a car, but needed one, said “I’m too cute to be walking”, wanted $10,000 for an older car. A contestant wanted $4,000 to pursue her passion for chasing tornadoes. A talented young man asked for $17,000 to start his own singing company and take the year off of work. A contortionist asked for $25,000 from the bank to travel to Beijing to hon his craft with the masters. A foster mom needed a lot of help with her two houses full of foster kids, and asked for $73,000. A young struggling actor/aspiring entertainment host pleaded for $10,000 for training and to jump start his career. Another man wanted to renovate his home – a tree house in his parents backyard! And lastly, a group of three strippers wanted $3,935 to develop a new type of stripper pole that would help strippers everywhere excel in their pole tricks! My question is, don’t the three of them make that much in two shifts?

A whole lot more surprises to come on “Bank of Hollywood”. The first episode is tomorrow night on “E!”. Check your local listings!