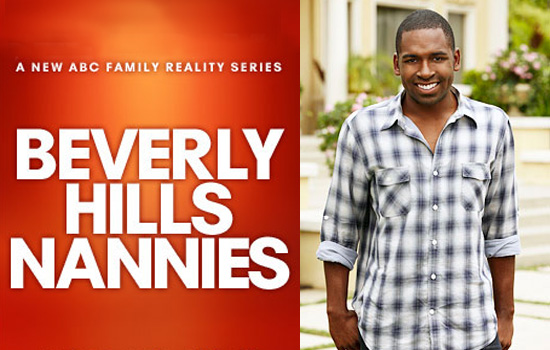 A group of nannies working in Beverly Hills, Ca is the basis for ABC Family reality series called “Beverly Hills Nannies”. In the group of working nannies orchestrated by head Nanny, Kristin, include a colorful array of characters that are Amber, Lucy, Amanda, Maggie, Scott, Shayla, Shaun and self-proclaimed “Lady-Sitter” Justin whom we got the chance to interview. 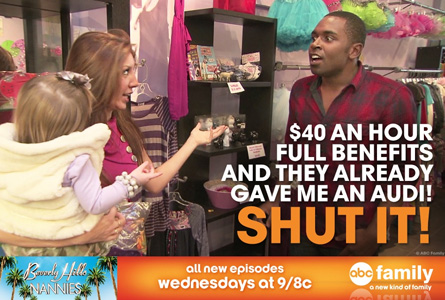 Justin Sylvester was asked by a reporter at a recent press conference, what was the most shocking moment on the show so far? Sylvester stated, “Going through Marika’s closet. That’s a very fascinating place. That didn’t get put on the show. The banter between Marika and I is more like brother and sister rather than employer and employee, and that got cut-out of the first two episodes.”

During his interview, Sylvester mentioned of couple of incidents on the show that will be surprise moments for some upcoming drama to fester. One will be that viewers can expect to see a “change” in Sylvester’s employment in which he attests that the show will follow. “Something changes in the next two weeks. It’s my life and I’m a Nanny no matter what. If I’m employed or unemployed it will follow me if I were to be looking for another job or unemployed at the moment.” 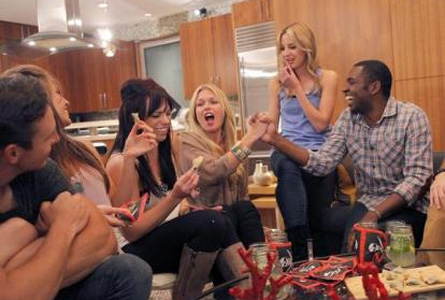 Justin (far right) said the nannies will divide by end of season.

The second surprise as stated by Sylvester during this season of “Beverly Hills Nannies” is that there will be a divide coming-up amongst the nannies. He said “towards the end of the season, there will be kind of a divide. You’ll see it played out. It’s really organic how different groups come together for different reasons. That’s really important how relationships on the show, how the group of friends are made through something like drama. You’ll see it all play-out. And I’m really excited for you guys to see it!”

Sylvester labels his uniqueness on – “The one unique thing about myself that makes me a great Nanny is that I’m a ‘lady sitter’..what I do is elevate some of the stress for the mom. She can be a better mother, a better wife a better business woman. In this day in age women really can have it all and that’s one of the most important things is being able to make someone’s life easier so they can spend time with their kids”. 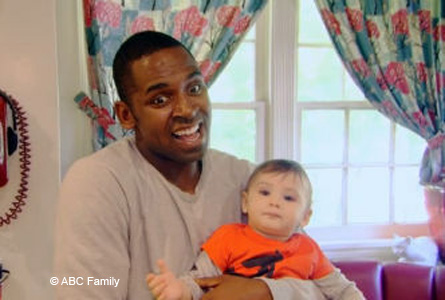 Justin- he’s not just a baby-sitter, he’s also a “lady-sitter!”

A job that he says he wouldn’t give up for the world Sylvester states is being a Nanny. However, there are some difficult moments and requests that also come along with the job. One, he stated was when he was asked by a former employer to talk to her daughter about her divorce. “Talking to kids about divorce is hard. That was a request that was brought to me. The Mother thought that her daughter would take the news from me better. She didn’t think that her daughter would be open and honest with her.” Four years later, Justin says he still talks to this young girl about dealing with the divorce.
Audio from interview with Justin in video player below:

Sylvester does admit, that there are few things that he would turn-down as a job request. “If it’s immoral or illegal, I won’t do it. But I’m pretty tolerant of a lot of things and a lot of people have a lot of outlandish requests”.

Among “outlandish”, the most extravagant possessions that he’s seen an employer own, Sylvester said, was a private G4 Jet. “She got it as a gift for her 40th birthday”.

The strangest thing that he’s seen is Marika’s breast milk, shown in last week’s episode. “You didn’t get to see the amount. I wish I could have taken out all the bags for you…it was the most gnarliest thing that I’ve seen in my life.”