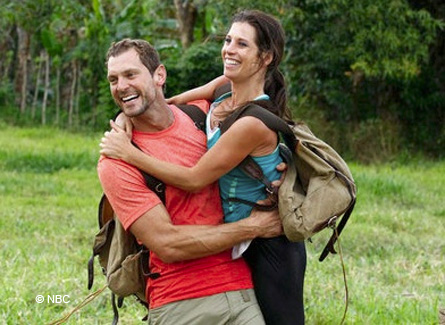 “Love in the Wild” dating game show that is made-up of challenges called “adventures” amongst couple competitors battling it out in the Dominican Republic for the grand prize of a trip around the world will air it’s finale episode this Tuesday.

The remaining couples are Ben and Michelle and Yanina and Ken. HOLLYWOOD JUNKET interviewed Ben and Yanina from opposing teams to find out what viewers can expect during the finale episode.

How do you prepare for each adventure?
Yanina said that there were a few things that she does to prepare for adventures. After not eating before jumping off of a cliff during the first adventure in “Love in the Wild”, Yanina stated, “We had to swim over to shore and go up some stairs. I really wasn’t feeling very well. After that, I started having a really good breakfast and making peanut butter jelly and banana sandwiches for me and Ken and making sure we were really well fed.” Her other form of preparation for adventures included listening to music.
Audio interview in video player below:

Yanina stated that during the drive to each adventure location in which contestants would be shuttled to, the contestants were not allowed to talk to each other due to a required “gag order”. Yanina went on to explain, “The ride would be about an hour and a half long…since we didn’t have an iPod or anything to the outside world. I really missed having music. The one thing that my Spanish came in handy. I would ask the driver to please turn on the radio or put some CDs or music. So it would get us all pumped up . That was a great way to get energized in the morning before the adventure”.

Last week’s episode of “Love in the Wild” was the exit for couple Summer and Chase. Ben Clark had a rivalry between the two and called them out for not being a romantic couple which is the purpose of the show. We asked Ben how he would describe Summer and Chase’s relationship on the show, “I thought Chase was more into her than Summer was. Chase found qualities in her and took on those. How athletic she was and very committed and found those enduring. In my opinion I thought it was more friendly than anything…The whole premise of the show. They were strong competitors, but it was more matey, matey than anything.”