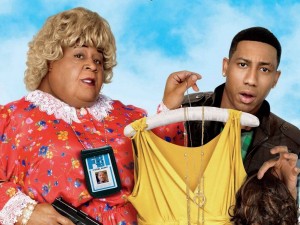 At the movie’s Hollywood premiere on February 10th, stars and film makers joined a general viewing audience and press under the Cinerama Dome at the Arclight in Hollywood. The introduction was emceed by popular radio host “Big Boy” from Power 106 FM.

FBI agent, Malcom (Martin Lawrence) sets out to protect his son, Trent (Brandon T. Jackson) an inspiring rap artist, after witnessing a murder by enlisting Trent into his own witness-protection program – a disguise as Big Momma’s niece Charmaine.

Malcom and Trent’s mission to obtain a crucial piece of evidence that could send “the bad guy” to prison, requires their stay at an all girls arts school. Their pseudo-selves, Big Momma and Charmin have them in many awkward situations signature of the “Big Momma” franchise.

“Like Father, Like Son” is a story mostly about son Trent. The film turns into a very familiar scenario of a teenage boy or girl going undercover as the opposite sex in order to achieve a goal. Films with these type of story lines include: She’s the Man (2006), White Chicks (2004), and Just One of the Guys (1985). The story never seems to get old with endless amounts of comical situations. My biggest complaint in this particular high school themed movie is that none of the young actors actually looked like they were in high school -more like – right out of college!

“Like Father, Like Son” is a light-hearted entertaining film – perfect for a Valentines’ date if it had been released one week earlier. Still, a great date film none-the-less with a funny cameo from actor Ken Jeong (Hangover) as the mailman. Other familiar faces include Ana Ortiz (Ugly Betty) as Head Master, and a very memorable performance from actor Faizon Love (Friday) who plays a security guard in romantic pursuit of Big Momma.