Los Angeles, CA – The second time on the set yesterday of GSN’s original live game show/sketch comedy show/ interactive show, “Big Saturday Night” proved to be more successful on the blue side, than HOLLYWOOD JUNKET’s first set visit on the red. You can read about that here: https://hollywoodjunket.com/2009/06/28/big-saturday-night-live-and-up-close/

A few changes were noted on set. The first most notable, a bit less of it is actually filmed live. Most of one of three hosts, Charissa Thompson’s bumpers were pre-taped. One such bumper, production actually made her rehearse. Thompson complained openly about this, stating to the studio audience “I’m not the one in charge. It’s not my choice”. When the rehearsal was over, she exclaimed, “aren’t you glad I rehearsed that!”.

Live TV does have its draw backs. Other co-host, Keegan Michael Key, was given (it was later announced) an incorrect call of who won the blind-fold game. He stated that the Red team had scored “seven points”, while in fact, both teams scored six. Studio audiences called him out on it. Key looked like a deer caught in headlights. It was quickly retracted and Key acknowledged the tie. The game contestants, which were two sets of couples, split the $10,000 cash prize. The audience all received “Omaha Steak” certificates to be redeemed online.

This winner foul-up is why it’s sometimes good to pre-tape. Producers had one audience member stand up in the bleachers and brag “I just won $500 on Saturday Night Live…” That’s right, she said, “Saturday Night Live!” Two more takes were required for a clean one.

This Saturday’s night celebrity guests were, “Boyz II Men”. Their comedy sketch, with host Key, had three takes filmed with slightly three different versions to test-out the punch-lines on amount of laughter from audience. The last take was used in the “live” version of the show. 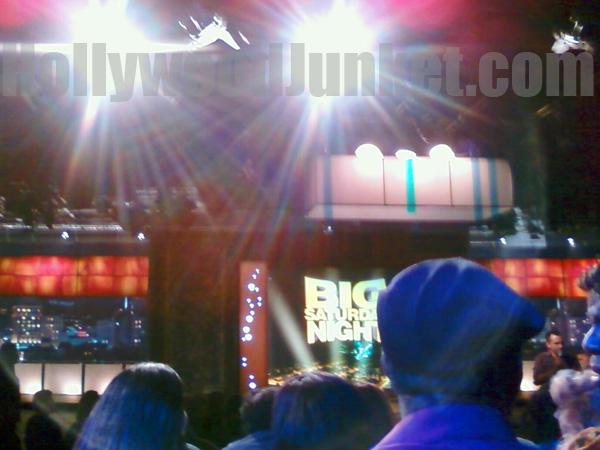 Blue side audience at “Big Saturday Night” were big winners!

The studio audience is split into two sections – a blue side, and a red side. With the exception of the audience that is placed in the “pit” area, all others who are seated in the bleachers are eligible to win their own prizes and cash amounts when their contestant of the same color wins. Games are played during commercial breaks of GSN’s broadcast shows, “20Q” and “The Money List” from 5-8pm.

Last night’s all around winner was, the blue side. Audience prizes won were: $50 “Fandango” gift card; $75 cash; $25 “F.Y.E” gift card; and an “Omaha Steak” Presidents Package. It’s great to be blue! It seems that the blue side of this game show has out-won the red side by over fifty-percent of the time.

For those that are contemplating spending a late afternoon at the “Andrita Studios” where “Big Saturday Night” is shot, it’s well worth your time and efforts should you happen to get seated on a winning side in the bleachers! Last night was quiet a few ticket-holders short. Grips had to pull some twelve empty chairs out of the back rows on each side.

All gift cards, and cash won by audiences were handed to them after last night’s show. However, no consulation prizes for the non-winners this time.

The third host of “Big Saturday Night”, Ross Mathews (The Insider) was off, and only seen in a pre-filmed game skit at “Sea World”. Matthews is expected to be back next week.