It looked like Halloween in July yesterday on Beverly Blvd in front of CBS studios in Hollywood as audience members lined-up on the sidewalk for a shot at winning prizes and cash on the re-make pilot of the classic game show, “Let’s Make a Deal”.

Outfits worn by those who wanted to stand-out in a big way included: a death rocker; Michael Jackson; Marge Simpson; a kissing booth; a banana; a ladybug; cow girls; superman; a chicken; an alien; pirates… and so on.

The set looks much like the original show from the 1970’s show hosted by Monty Hall. The set consisted of yellow walls, a large stage with three curtains, that also served at three “doors”. 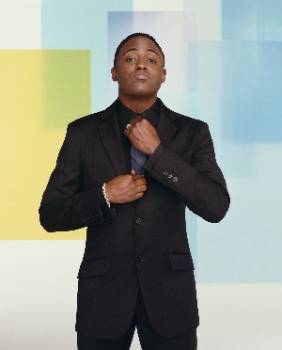 The host of the pilot shot for CBS is the host of another game show a lot of people will recognize – Wayne Brady. I do believe Brady has met his game show calling with this show. His personality and hosting abilities actually fair better on “Let’s Make a Deal” than on the Fox karaoke game show, “Don’t Forget the Lyrics”. Brady seems very genuine as he jokes and laughs with the audience, as well as very down-to-earth. He’s also an expert at giving “the reveal”, only here, it’s “what’s behind curtain number 1?”

The show is executive produced by another familiar host, Mike Richards, who hosted “Beauty and the Geek” from 2006-2008. Richards’ previous producing game show experience has been on “The Price is Right”, and “The Weakest Link”.

This show features a live drummer, Pam, whom Brady had fun with and had her play on his cues. He then mocked, “Drew Carry, you can’t do that!” as well as stating earlier, “You won’t see this on the Price is Right (giving away cash)” Brady also pointed-out, “I’m the only host that has hordes of cash in his pockets to give out!”

Because this particular filming was a pilot that will NOT be aired, none of the contestants or audience members were allowed to keep their cash, nor were they actually awarded any of the prizes. However, “participants”, or people who played contestants, on this pilot were paid $30. These contestants were pre-selected, and auditioned before film day. About ninety-five percent of this show takes place in the audience. Richards exclaimed to the audience, “you are the set!” This is the only show where the cameras on stage were all pointed in the direction of the audience, and not the stage. Only one game required to be shot traditionally on the set stage (see photo below). 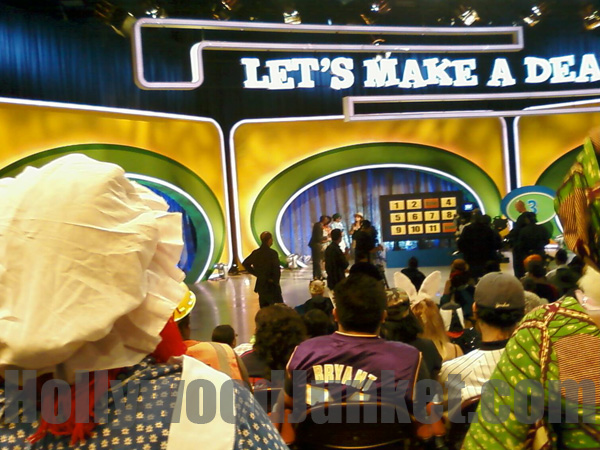 Brady is joined by a “co-host/announcer”, Johnathan Mangum who runs-out boxes, and treasure chests that contestants are forced to choose between their mysterious contents or a curtain or door on stage. Most contestants were surprised with a “Zonk” (a.k.a., useless prize) that was either a yak, a mountain of rocks, an inflatable pool, or even a Sumo Wrestler when choosing a curtain. These along with real prizes that included: cars; a kitchen; money; and trips to Hawaii and Aspen were all shown-off by the beautiful “Price is Right” model, Rachel. 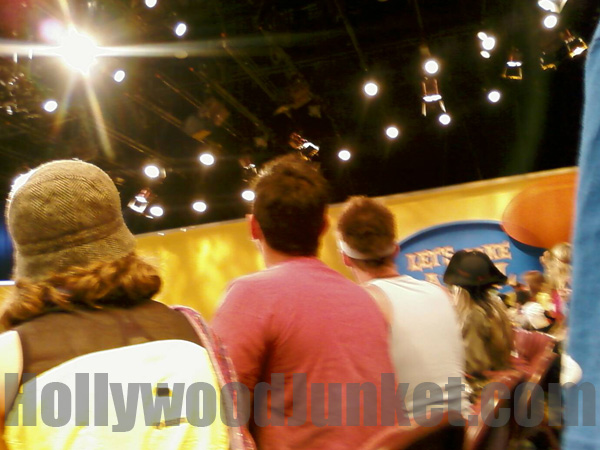 The show is very high energy, encouraging audiences to yell-out selection suggestions to contestants who are seated in the audience. After calling two to three people up to play, Brady then ask them to choose between cold-hard cash, or an unknown prize behind a curtain or door. At the end of the game the two highest players are given the opportunity to play for “The Big Deal”. This is a prize that is worth more than any other prizes given away on the show that day. The “Big Deal” prize on this day was worth $28,000. Brady then wrapped the show-up by giving money out to audience players whom have random items such as: a penny from the 1980s; a tattoo; a donor card; or the ability to dance “the running man”.

Brady has not been confirmed as the show host yet. But, he would be an excellent fit. Audiences seem to always love him no matter what show he is on. Get exclusive audience video interviews on the HOLLYWOOD JUNKET website later this month.