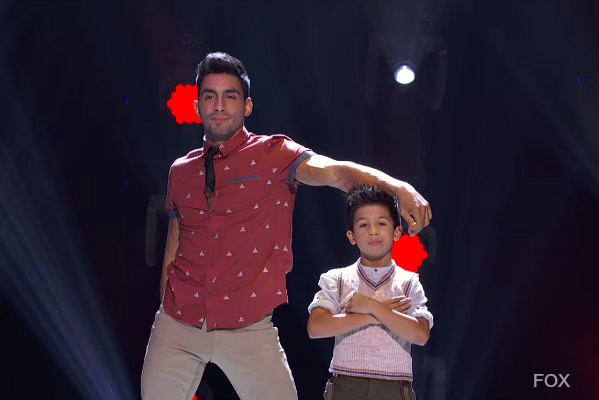 Last week on “So You Think You Can Dance” some stand-out performances came from J.T. and Robert who performed a Travis Wall contemporary number that had them mimic each other as if they were looking into a mirror; Kida and Fik-Shun who played puppet and puppeteer in an unforgettable Dave Scott hip-hop number; Ruby and Paul who displayed some impressive foot-work in an Argentine Tango by Miriam & Leonardo. The show finished with an explosive tap routine by Gaby and Emma choreographed by Chloe Arnold.

The “So You Think You Can Dance” (SYTYCD) Top 8 opened the show with a stellar performance as toys dancing a hip-hop number choreographed by Pharside & Phoenix.

The first All-Star and contestant performance of the night was by Gaby and Emma who tapped to an Anthony Marigerato number. Marigerato is nominated for an Emmy for his dance number he choreographed on SYTYCD last season featuring Gaby and Zack dancing on boxes.

Emma and Gaby got a standing ovation from the judges. Nigel responded to the performance with “these two are made in heaven for each other.” He also said he loves hearing the rhythm of the taps like in their dance. Nigel predicted that Emma will go a long way in the competition. Paula stated that they were magnificent. “Emma is such a little star with a wealth of knowledge with the best mentor and best choreographer.” Maddie thought they are perfect for each other. Jason stated that Emma is getting better and better week after week. She’s getting “greater and so focused” he said.

Tahani and Comfort had the pleasure of working with famous hip-hop choreographers Napoleon and Tabitha (NappyTabs). The dance number was a narrative about a wife and daughter whose husband and father walks-out on them. Napoleon stated the dance needs “real-life emotion. We’re asking them to be more than the character.”

The beginning of the dance did look similar to the very popular dance last week that Travis Wall choreographed with J.T. and Robert mirroring each other. Tahani and Comfort mirrored each other on opposite sides of a wall.

They also received a standing ovation from the judges. Paula said they are like “doppelgangers” and it was incredible choreography. She also said it’s her favorite Tahani performance since the beginning. Maddie agreed with Paula and said it’s the best dance that they’ve done. She said she can relate to the piece, and Tahani is “bringing something extra each week.” Jason loved the switch-up with the hip-hop and said it was “brilliantly executed.” He also agreed it was the best Tahani performance. Nigel joked “don’t worry girls, I’m coming home tonight!” He then reacted by stating it always amazes him how much emotion you can get out of hip-hop. He thought they conveyed it “brilliantly” and pegged Tahani as one of his favorites! 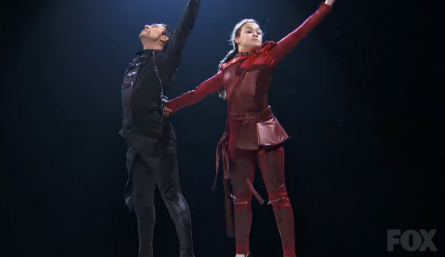 Ruby and Paul were choreographed by Jean-Marc Généreux to do a Paso Doble dance. They also received a standing ovation from the judges. Maddie said they are phenomenal pair and what a way to bounce back from the bottom two last week. Jason complimented them on their “beautiful lines after beautiful lines. Just visually stunning.” Nigel noticed that the All-Stars are learning from the kids too. He said it’s the best he’s seen Paul dance, and everything from Ruby was “right on point.” Paula told Ruby “that was an aggressive and hard routine. You handled it with grace and dignity and complete, total control.”

The first contestant partnership routine of the night was by Jordan (14 years old) and Jake (12 years old) who danced a head-to-head drumline competition. It was a hip-hop number. Jordan is a contemporary dancer and Jake is a ball room dancer.

After their drumline performance, Jason responded they they were “swagging”. Nigel stated to Jake “that was fresh! That was dope!” But, didn’t know what he was saying. Then said, Jake was pretty good but has to learn how to do a “stank face” from Comfort because he smiles too much while doing hip-hop.

Nigel also stated that Jordan’s personality is starting to come out and it’s great to see. Paula said “all of you are doing incredibly well” and she’s proud of them. Maddie stated that they both did a great job for not being hip-hop dancers. 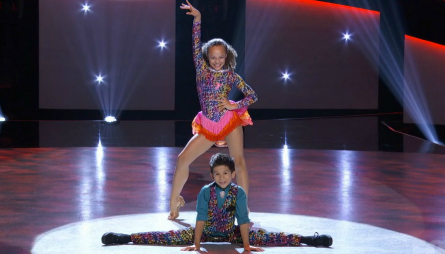 J.T. and Tahani had the daunting challenge of trying to nail the cha-cha choreographed by Emma Slater and Sasha Farber. Although they are both bubbly and fun to watch, technically, it didn’t go so well for them.

Nigel noticed that neither of them had basic styles of cha-cha, which he sort of pinned on the choreographers along Tahani and J.T’s overall lack of ball room training. He said they needed to get a few more of the basics. He told J.T. to make sure he tucks his “derriere” a bit more with the Cha-Cha and to “try to improve your technique.”

Paula said she couldn’t keep her eyes off of them. But the routine did expose them with their lack of training. Maddie said she thinks with more practice they will be great ball room dancers and she enjoyed their performance. Jason said he was proud of them because they threw everything they had at the routine.

Choreographer Sean Cheesman dedicated this piece to his father who was admitted into the hospital. Paula reacted with that Jordan shined like a star and she did Sean Cheesman very proud. Maddie stated that Jordan’s strength and technical moves showed the best of her. Jason said it was really incredible to see, and with no music (it was an A cappella song) “it was all about you and the vocal with no room for any mistakes.” Jason also added that it was like they were one being at some point. Nigel said Sasha and Jordan compliment each other so beautifully. 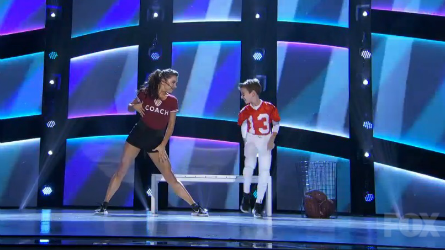 Jenna and Jake had to dance a Jean Marc Genereux number where they played a football player (Jake) an coach (Jenna). Maddie told Jake that his partner work gets better each week. She and everyone was impressed by Jake’s cartwheel in the number. Jason said Jake is bringing something exciting and fun to watch every week. Nigel told Jake that it’s type of routine where he shines and makes everyone feel uplifted. Paula told Jenna and Jake that they are one of her favorite couples and Jake is very seasoned at a very young age.

Emma and Tate had a Broadway number by Sean Cheesman. The story was that they were two bad girls in detention. Jason was a bit critical stating that for the first time outside their element, it wasn’t their best moment. Nigel complimented them that they “set so nicely in the groove of the music” and they had fun with it. Paula said it was a really cute number and that it “could be out of a film.” Maddie loved it and thought it showed how versatile they are.

Ruby and Kida were challenged with a contemporary routine choreographed by Mandy Moore. Ruby (12 years old) is a ballroom dancer and Kida (14 years old) is a hip hop dancer. Moore’s message with the number was that with all the crazy stuff happening in the world, we have to look to each other for support. Moore stated that Kida and Ruby “have to connect together because ultimately, that’s a great piece.”

Kid and Ruby did a great job pulling this contemporary dance off. The judges gave them a standing ovation. Nigel said the song that they danced to “Somewhere Over the Rainbow” is one of his favorite songs, and their dance was “beautifully done”. He told Kida “you’re a joy for this competition. Nigel said he felt Ruby’s joy and passion. Paula said “now, that’s how it’s done!” She also added that it was the first routine where she was “swept away”, and she was watching two talented dancers, not two kids. Maddie thought “everything was gorgeous” and they’re “definitely here to stay.” Jason noticed that Ruby pointed her toe the whole time, and Kida didn’t.

Contemporary dancers J.T. and Robert danced a jazz routine choreographed by Mandy Moore who said it was a celebration of their dynamic duo. Paula described their performance as “fun, smart and charismatic” and that it was Broadway worthy. She also said they bring out the best in each other.

Maddie stated that Robert and J.T. always “wow” her. Jason said J.T. is in his element and they are the “dynamic duo that America loves.” Nigel said for J.T., this is where he shines and compared them to legendary dancers Shirley Temple and Bill Bojangles. 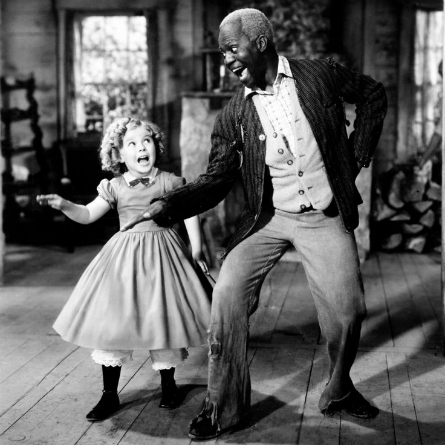 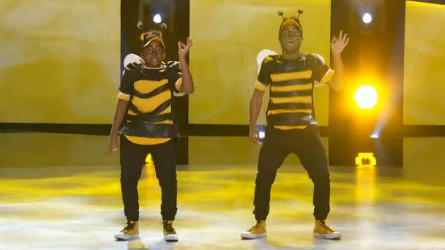 Kida and Fik-shun’s choreographer was Misha Gabriel who gave them a dance about being bees in a beehive. Maddie reacted with “America loved it,” and was impressed by Kida’s front flip. “You guys are all the buzz!” Jason said he just sat back and enjoyed the show. Nigel joked with a play on words that their performance was “unbeelieable! The only words Paula had for Kida was to “keep it going.”

Kathryn and Tate danced a contemporary number by Travis Wall. This piece was about a daughter who finds her mother and tries to break through to her. Travis said he wanted it to be “the most complex duet this season.” The judges gave them a standing ovation.

Jason reacted to their performance by stating that it was an “amazing piece.” He was impressed with Tate who had to master such a deep piece at her young age. “This wouldn’t have been the same without you” he told Kathryn.

Nigel said singer Sara Bareilles performed this piece just for SYTYCD and her along with others cleared their music for the show. Nigel also said he never thought they’d find someone like Tate when they started the show, and Kathryn is the best actress on the show. Paula said Travis Wall, who competed on SYTYCD second season, is a gift that keeps on giving. “Tate you are the same gift” and she’s becoming an emotionally exquisite dancer. Maddie said every week, Kathryn and Tate are insane and this is the best dance of the competition.

Next, it was the much dreaded moment of the show’s double elimination. This week, it was host Kat Deeley who was the bearer of the bad news. It was Nigel in previous weeks who made the announcement. But, before Kat read her card with the eliminated names, Nigel spoke some words of encouragement. He said “The strongest people are not always the ones that win. The strongest people are the ones that don’t give up when they don’t win.”

Unfortunately, Kat read the names of Jordan and Jake as the dancers who would be going home. 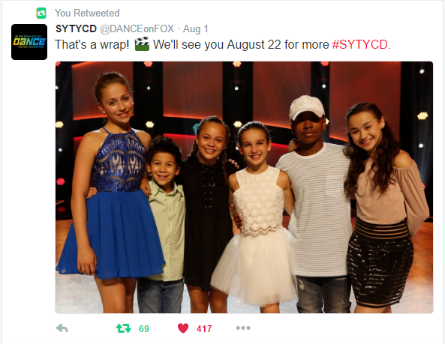 This was the last episode before a two week “summer vacation.” SYTYCD will return with live shows on Monday, August 22nd airing on FOX.