Camila Cabello Upstages the Coaches on THE VOICE Season 22 Sneak-Peek!

A Comedian and A.I. Tech Voted into the Finals on AGT Live Shows Week 4 Results

Camila Cabello Upstages the Coaches on THE VOICE Season 22 Sneak-Peek! 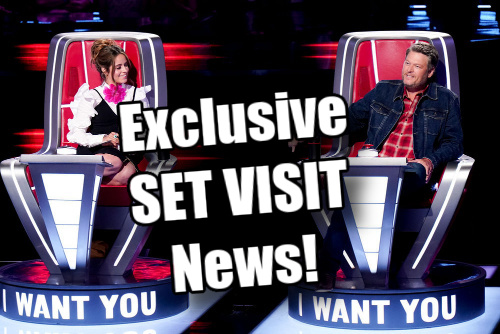 Blake told the audience that there’s a new “runner” of the show this season.  That is that John can’t beat Camila!

The year was 2021, and ex “Fifth Harmony” lead singer Camila Cabello was a Key Adviser on Team Legend on “The Voice.”  Just like another ‘Voice coach, Kelly Clarkson, whom Camila is taking over for, she also knows a thing or two about competing on a singing competition reality show.  Camila shot to stardom after competing on “The X Factor USA” where her all girl group “Fifth Hamony” was formed.  Now, it’s 2022 and Camila Cabello is back on “The Voice.”  But, this time as a coach.

HOLLYWOOD JUNKET visited the set of “The Voice” during a tape day for season 22.  The day, which was a long one, included numerous of stand-out singing talent, and of course tons of entertainment from the coaches.  We saw new coach Camila make lengthy speeches to potential team mates.  We saw the coaches’ gift offerings to the artists stepping out onto the stage; a lot of young artists showed-up; we also saw first-hand Camila getting hazed by Blake Shelton.

The other coaches who are back this season are John Legend, and Gwen Stefani who is also recently married to Blake Shelton.  We didn’t see a whole of of PDA from these two.  But there were moments when they would go over to each others chairs to chat and flirt with each other.

When the coaches were questioned by host Carson Daly on their expectations for this season,  Gwen said she’s focusing on getting nice people on her Team.  People who are a joy to work with. She’s done “her thing” and she’s at a point in her life where she wants to help others.

Blake said he hasn’t been able to get a word in edgewise, and pointed to Camila and Gwen. 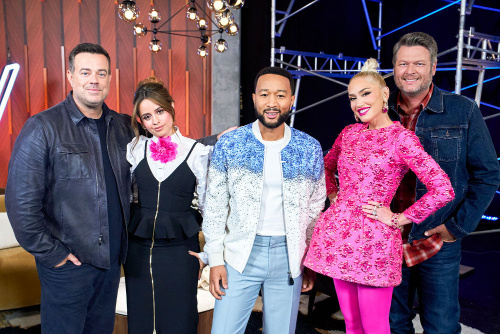 John said he’s been so surprised at how young everyone is on the show.  Where they sound so much more seasoned than their age.

Camila said she’s been on a competition show and she knows how to push to show her best self and have that come out.  She wants to teach her Team how to do that.

On the flip side, from the coaches perspectives, they all seemed to be annoyed by Camila.  On the day we were there, Blake was trying to do a skit that involved a goat, who wasn’t cooperating with him.  We’re sure this goat was a symbol for himself – greatest of all time!

The Team gifts this season are:  A backpack for Team Blake; a fanny pack with an Instant Camera inside from Team Camila; A long sleeve graphic T-Shirt with Blake on it from Team Gwen; and a varsity jacket that says “Legend” on the back from Team Legend.

Camila pulled a gag on John and brought out one of his jackets with tape across the back that read “Camila is a Legend.”  John hated it and grabbed the jacket out of her hands.

The taping that HOLLYWOOD JUNKET attended went long.  On top of a lengthy list of artists who were auditioning that day, new judge Camila also took a lot of time talking to artists to try to win them over.  Again, from our bird’s eye view, it seemed that the coaches were a little annoyed by her.  But, also it seemed that some of the crew felt that way as well.  None the less, Camila did win over a lot of artists on the day we were there.

Going a bit further into “The Voice” season, fans will see that one popular round of the show (The Knockouts) will be revamped!  HINT: It’s been redone in a way that will rapidly expedite eliminations this season! Does that mean bigger Teams?  Hmm….

During a battle between the coaches to win over an artist, Camila kept trying to win over this artist.  But, Blake kept muting her with a special function on his button.  Camila got frustrated over the hazing and went on stage to use the artist’s microphone.  Then THAT mic got muted as well!  Then John Legend let Camila use his mic.  That also got muted.   Then Camila went over to Blake to speak into his mic.  Readers can guess how that went.  After that, she gave up.  Finally, production turned her mic back on and she was able to finish talking.

During HOLLYWOOD JUNKET’S set visit, we were lucky enough to see three four-chair-turns!  Because this is an early publication, weeks before the season 22 premiere, no names of artists will be included below at this time.

SNEAK PEEK at the Artists:

There is a young artist who got a four-chair-turn whom John Legend said reminded him of Maelyn Jarmon, his season 16 artist who won.  John told her she sang “gracefully.” This artist took a moment to fan-out over Camila Cabello, and told her that when she saw her performing on THE X FACTOR wearing a bow in her hair, it made her want to be like her.  After that, Blake said his chances of getting her on his Team practically vanished completely.

One 17-year-old was a breath of fresh air.  She sang Patsy Cline in a Jazzy, R&B sort of style.  Blake really liked how she sang the song differently.  Another artist sang a popular song by Jewel called “You Were Meant For Me,” which was released in 1995.  Camila said she didn’t know the song.  Maybe because it was released in 1995!  Camila Cabello was born two years after this song.  Blake was still shocked that Camila didn’t know the song.

Another four-chair-turn was given to a 22-year-old male artist.  He is Nigerian and from Arkansas.    He sang “I Like it Like That” in a unique way.  Gwen said she’s never heard so many mixes of styles like he did.  He said his influences include West African artists.  Many of whom John knew and had worked with. 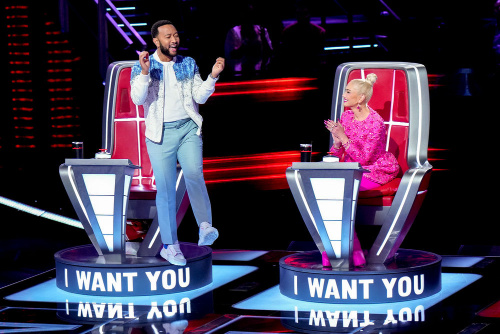 A 27-year-old from Oklahoma sang a Kacey Musgraves song that Camila knew so well, she was lip-syncing to it in her chair.  The audience could see her talking to Blake, urging him to push his button.  Let’s just say, we were seated next to this artist’s siblings and they were ecstatic.

The third four-chair-turn that we saw came for a 20-year-old artist who sings Pop, Soul, and R&B and lives in Nashville.   She had powerhouse vocals and belted-out the Lizzo song, “Cuz I Love You.”

Camila won over an alternative/rock artist when she said she looks at Pop as being a lot of different styles and she stays on the “left edge of Pop.”

All of the coaches were shocked when a certain male artist revealed that he was 15-years-old.  Blake was the only one who turned for him.  His family celebrated by coming out onto the stage to join him.  Another artist, who sang a Taylor Swift song, seemed that she went on “The Voice” wanting to choose Blake.  However, there was a  conundrum when both Blake and Gwen turned for her.

Camila didn’t help when she told this artist that she should pick Blake since she is a singer-songwriter and it would be a better fit for her.  Gwen told Camila that she stabbed her in the back .  Gwen was so upset that she couldn’t get her thoughts together quick enough to argue for her Team.  So, she let Blake speak first.

After everything was said and done, Camila went over to Gwen for a hug.  But, we could see that Gwen faked nice back a hug.  As we witnessed the whole incident go down, It was evident that Gwen was visibly upset at Camila for showing such little respect for her as an artist.