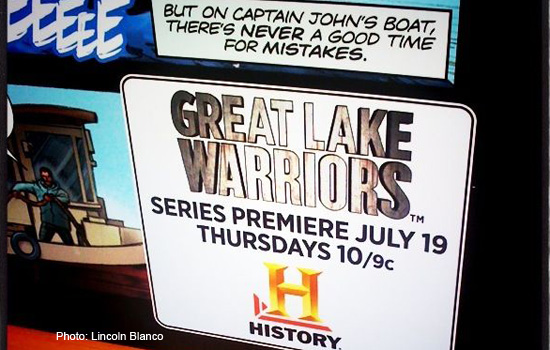 History news from Comic Con -History Channel has big plans to dominate the ratings with their upcoming new reality television series; “Great Lake Warriors,”Shark Wranglers,” and “Picked Off.” But even bigger hopes on a groundbreaking comic book series entitled “Mankind.”

“Mankind,” in collaboration with Zenescope Entertainment, paves the way for History Channels upcoming November television series “Mankind; The Story Of All Of Us.” When asked what made History want to branch out into comics, History Channel Exec’s replied “History Channel is great at story telling. What better way to tell a story, and expand the History brand than with a graphic novel.” To get the job done, History sought out the best and most talented artist and writers in the business; Neil Adams, Dennis Calero, Nathan Edmondson, and Marv Wolfman to name a few. History Channel really hopes to attract a younger audience, and make learning fun for kids with these graphic novels. I know if I had something like this in school, instead of a boring text book, I might have retained a lot more. 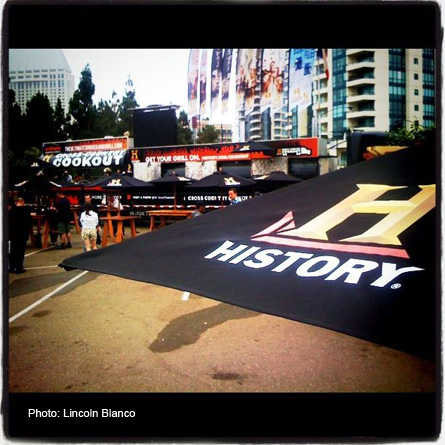 History channel cookout at Comic Con to promote their shows.

History Channel also hinted to big plans for their upcoming programming coming out next spring, “Vikings” and “The Bible.” Hoping to return to Comic-Con with graphic novels associated with these two new shows.

Lets talk reality, “Great Lake Warriors” is a new series coming out on History about tugboats working the most dangerous bodies of water in the Americas. Promised to be an entertaining cast of character, you will see men fighting for their lives everyday as they deliver supplies and guide ships through the roughest waters in the world. According to History.com, the show takes place on a deadly inland sea where up to 6,000 vessels and 30,000 lives have been claimed!

“Shark Wranglers” is a show currently airing on History, following a team throughout South Africa as they track Great Whites. With only 3,500 Great Whites left in the world, watch as “Shark Wranglers” do their part in protecting this valuable ecosystem (airs Sundays at 10/9c) Another show that I am excited about is “Picked Off.” “Picked Off” is a competition reality show that allows 3 couples to find the best pick, and bring that pick to be judged by a team of professional auctioneers. The couple with the most valuable pick wins! History Channel plans to make television history again with “Picked Off,” by allowing viewers to bid on the actual items seen on the show. Interactive TV, how cool is that!

“Great Lake Warriors” premieres Saturday, July 19 at 10/9 c on the History channel. Catch up with you favorite History Shows on HuluPlus! – Start Your 1-Week Free Trial

-Written and reported by: Lincoln Blanco