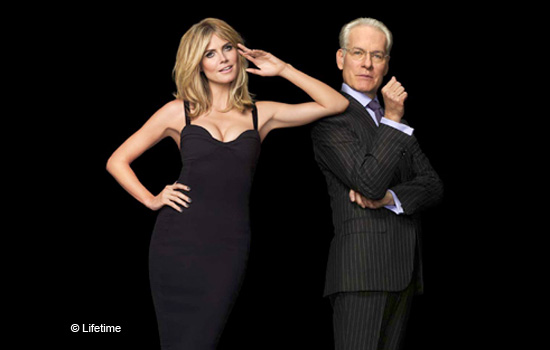 Casting Season 10 of “Project Runway”
In an interview moderated by Lifetime channel that broadcasts the popular fashion reality competition show “Project Runway” host and producer of the show, supermodel Heidi Klum talked about the process of finding talented designers each year.

Heidi Klum stated, “When we do the casting so many different people come to the casting. Sometimes people bring the craziest things to the casting, like T-shirts with studs in them or they knock things together but not in a cool way. It’s clear they haven’t seen the show. They don’t know how hard it is to be on there. You have to be able to sew”.

One surprised reveal that Klum made that happens often at casting call is that some people try to “fake it”. She said that some of them bring things where “you know clearly they have not done that. Where someone’s cut the label out and they’ll just show you that. There are numbers of people who were fake or not really real.”

It’s all worth it when those few special designers walk in. Klum stated that how they know is “when that person just all of a sudden walks in the door and they would have some clothes where we raise our eyebrows and go, ‘Oh wow, that’s cool. Tell me more about yourself and what your point of view is and who you are designing for’,” as well as “string sentences together”.

Klum’s best advice to designers trying-out for the show is “come with some great clothes and know who you are, because you do need to know who you are as a designer if you want to be here and show your point of view”.

One particular contestant got a second shot this season. Designer Gunner Deatherage tried-out last season and didn’t make the cut. Klum said that they decided to give him another shot. Last season he came with a prom-looking gown that was not “fashion forward. It was very Cinderella, old school, and we just did not believe in him that much”, stated Klum. She said that when he came back this season, he evolved more as a designer. “We like it when they prove us that we’re wrong, that they’re better than expected. He’s a fun guy and he deserves to be here”, Klum said.