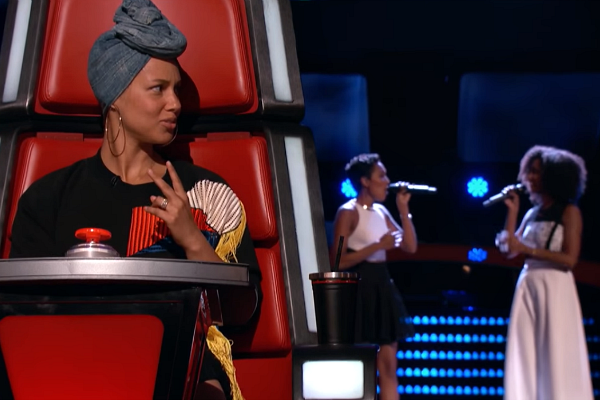 The final night of “The Voice” season 11 Blind Auditions made a few lucky artists dreams come true as they were some of the last special talent to win over a coach and get through to the next round – The Battle Rounds.

The first team to become full was Alicia Keys, followed by Blake Shelton. Adam soon followed, and Miley Cyrus was the very last coach to fill her team. Each team consists of twelve artists who will all go on to battle other members on their teams with the help of mentors that the coaches have already picked-out. 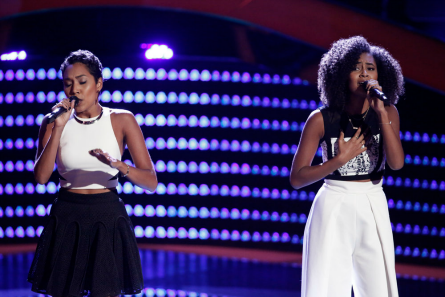 The only duo auditioning this season is sisters Whitney and Shannon who are 25 and 23 years old. They used to perform at bars and coffee shops. They now live one hour away from each other. Although their style of music is pop, they said they’d like to have Blake as a coach. Whitney & Shannon sang “Landslide” (the Dixie Chicks version).

Adam said with duos, “it either works or it’s a mess.” For them, however, “it was really, really special and you blew my mind,” he said. Blake’s reaction was that they sounded so country and drew him in. Blake pointed-out that he coached duo pair “The Swon Brothers” who were on “The Voice” season 4 and the first duo to make it to the finale.

Listen to Shannon & Whitney’s INTERVIEW Below:

Alicia told the sisters, “there’s no box you fit in and you fit everywhere…You represent the future.” She added that they’re “a beautiful fusion of all of us.” Alicia also said they would be crazy powerful together and called it “major sisterhood.” Miley said she loved the harmony and “there is this psychic connection.” Miley revealed that she played “Landslide” song during the hardest times in her life.

Whitney and Shannon picked Alicia as their coach 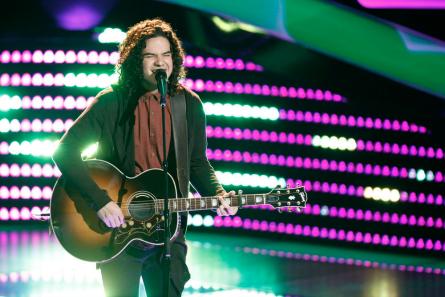 Johnny is from a Cuban culture. He overcame a drug problem and during house arrest is when he practiced the guitar. He is currently an IT manager. He sang “Iris” by the Goo Goo Dolls.

The coaches waited until the very end to push their buttons – “a sneak attack.” Adam said he wants to help build his falsetto tone. Miley said Adam’s the best guy for falsetto. Blake said he likes IT guys. Johnny loves country, covers Maroon 5 a lot. 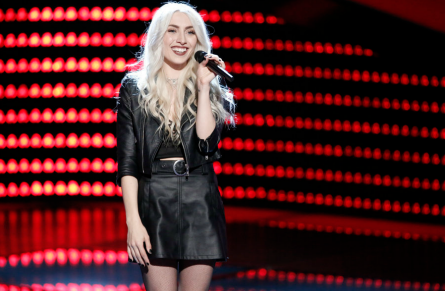 Maye is 27-years-old and her dad is a radio D.J. She’s from Oklahoma (home of the Swon Brothers) and an Indie Pop artist living in Nashville. She is currently a waitress. Maye’s husband is in a band and they create music together. She sang “Roses” by Chainsmokers.

Adam told Maye that “a voice like yours is different, but good.” He said she was a tiny bit flat and will be honest with her as a coach. Miley said she likes that Maye didn’t freeze-up and would like to hear a song that’s not so current and have a song that’s more about her.

Listen to Maye’s INTERVIEW Below:

Maye picked Miley with Adam’s encouragement. Maye later told host Carson Daly that “no” Adam didn’t have a chance being her coach.

JOHNNY HAYES – Johnny is from Mobile, Alabama. He met his band after moving to Nashville. Johnny who recently got married, put his honeymoon on hold to audition for “The Voice”. He sang “Traveller”. Unfortunately, Johnny did not turn any chairs. Adam reacted “there was a lot of good there. It was up an down. You’ve got a good voice.” Miley said “the people that are so close and we have to make a decision in 90 seconds.” Alicia said it needs to be more about him and to “own it”.

Courtney is a song-writer who’s written for Mary J. Blige, Neyo, among other superstar singers. Courtney’s primary focus for the past 18 years has been her son. She sang “Let it Go” by James Bay.

Courtney said she was a little nervous because she hasn’t sang in public for 15 years. Blake said “I just heard a brilliant voice. I have mad respect for your voice. I can’t believe how incredible that was.” Alicia told her, “this feeling that you gave me is a very emotional feeling.” She said she’s proud of Courtney and sees what greatness Courtney is about to step-in.

Courtney picked Blake for her coach.  She said she picked Blake because “he respects the artistry” and she sees herself thriving under him. Blake said he was shocked. Adam called it “amazing.”

Kylie’s mom said Kylie used to sleep with her guitar so she could wake up and start playing if she had the inspiration. Kylie had a vocal hemorrhage and feared that she wouldn’t sing again. She recently got her voice back and sang “Wherever I Go” by One Republic.

Adam told her “that was solid guitar playing,” and called her awesome. Miley said she’d like to see Kylie with Alicia mostly because it would be cool with that guitar. Blake said they’re down to the wire and “I’m somebody who’s been through it and I will be your rock. I’ve been waiting on you Kylie”. Alicia said she loves that she plays guitar and would like to help her.

Kylie picked Alicia for her coach. Kylie said she felt like Alicia got her and understands what kind of artist she is.

Listen to Courtney and Kylie’s INTERVIEW Below:

Alicia called her team “a force”. She said “I feel that everyone is threatened and they should be.” 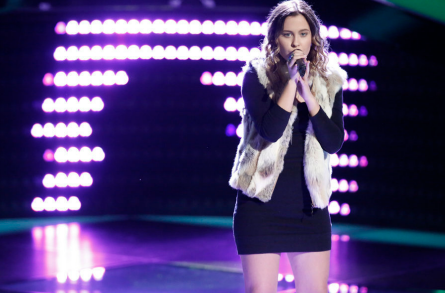 Natasha said she was always in a music program in school. Her famous mom, Candace, used to play “D.J. Tanner” on “Full House” sitcom. Natasha just graduated from high school. She sang “Can’t Help Falling in Love with You” by Elvis Presley.

Adam reacted, “I heard this self assured girl singing well. There was something different and special.” However, Adam said the second he turned, she fell apart. Miley told her to “work on getting your nerves together,” and that she has a “sweet, innocent voice. It was really amazing.” Adam said its hard to stay focused and he’s going to get through to her.

The coaches had only three spot left by the time Blaine Long auditioned. 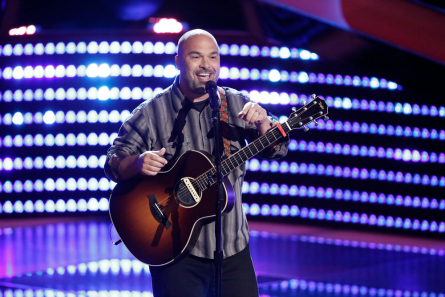 Blaine is 40-years-old. He said he did a lot of odd jobs that included painting houses and that’s how he met his wife. Him and his wife adopted their kids. He gigs 4-7 nights a week. He sang “Have a Little Faith in Me.”

Alicia said she would have also turned around if her team wasn’t full. Miley said she liked his simplicity. Blake said he’s happy to hear him say it’s about lyrics and songs. Blake said it’s song that has kept him around and would like Blaine on his team. Adam said “this dude is one in a million” when he heard the rift that he did. Adam said if he could have Blaine on his team it would be a fairy tale ending.

Blaine chose Blake for his coach.

Listen to Blaine’s INTERVIEW Below:

Blake said now he has a little bit of everything and Blaine is leading his team.

NICHOLAS RAY-  Nicholas said the voice is the only show that can get him to the next level and doesn’t want to be known as a cover singer. He wants to blossom. Nicholas was hoping to chose Adam for a coach. He covers Maroon 5 songs. None of the coaches turned around. Adam said it didn’t quiet get there for him But the a cappella at the end was flawless Blake said it felt “loungey”. With only one spot left, Adam said he wants to be blown away. 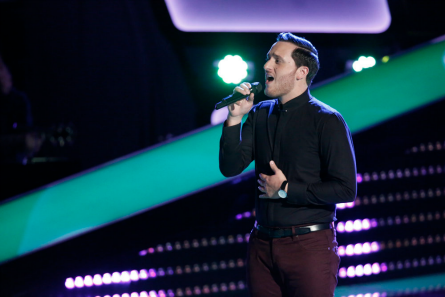 Ponciano’s name is also shared by his father and grandfather which reflects his Cuban heritage. He was born in an air force base. Both of his parents are in the military. He currently works in a hospital. Ponciano sang “Home” by Philip Philips. He said it’s an anthem to his son and wants his son to know he’ll always be there for him since he is no longer with his son’s mother.

Ponicano told the coaches he’s from San Antonio, Texas. He explained his name being Cuban. Then Adam and Miley tried to say they’re Cuban. Adam said “you feel everything you’re singing. It translates to a large audience. The root that is there is spectacular.” Miley said “we can hone in and be very focused.” She said “it doesn’t matter what makes us the same or what makes us different. I can be a great coach for you.”

Ponciano picked Adam as his coach

Adam said he’s very excited about his team and the stakes are high! 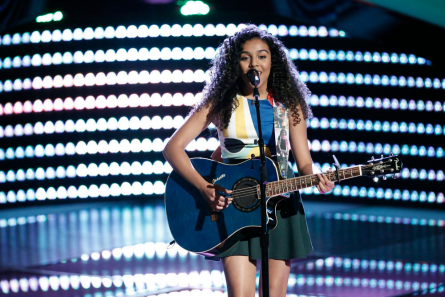 Josette is 17-years-old and taught herself how to play the piano. She started singing at age two. She currently teaches guitar on the weekends. Josette sang “Love Yourself” by Justin Beiber.

Miley told her that all of the coaches believe in Josette and they all wanted to push their buttons, but couldn’t .

Listen to Josette and Johnny’s INTERVIEW Below:

She calls her team the young fun team.

SNEAK-PEEK: The Battle Round will begin next week. A couple of the battles include: from Team Alicia – Jason Warrior vs Christian Cuevas; and Josh Halverson vs. Kylie Rothfield 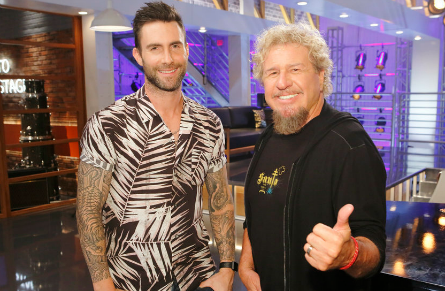 The Coaches have selected their mentors for their teams this season. Sammy Hagar is Adam’s; Charlie Puth is helping Alicia; Miley chose rock legend Joan Jett; Blake is bringing Bette Midler to help his team. 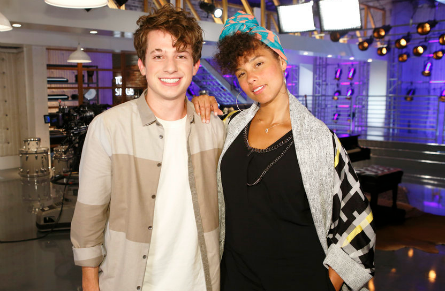 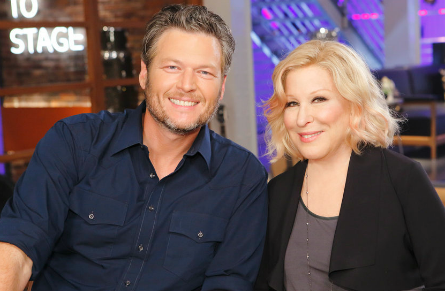 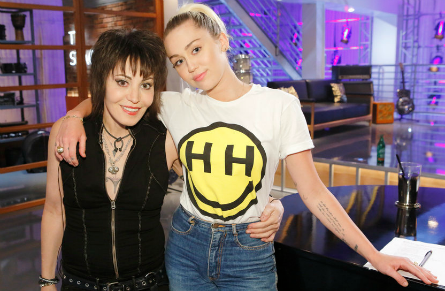