The half-hour daytime version of game show, DEAL OR NO DEAL returned for a second season of taping in Waterford, Connecticut earlier this September. HOLLYWOOD JUNKET received an unexpected piece of news yesterday regarding what appears to be, a grim future for the show. 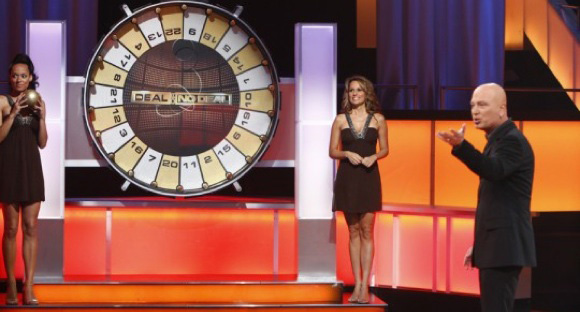 Deal or No Deal, daytime models Patricia and Tameka with host Howie Mandel

According to reliable sources, the Connecticut excursion this time around has been cut short. The show has, once again (like with prime time DEAL’) halted production.

But, wait, there still may be a glimmer of some hope left. “At first, we were told the show was wrapped for good,” according to one source. Who also stated that it’s actually on hold, and that production is looking into filming the show in other states such as Atlanta.

I’m sure the bi-weekly trek has taken its toll on some crew and cast members. Flying camera men, and one model that we know of, back-and-forth every other week for an eight-day shooting schedule at a time. Once arriving, it was about a two-hour car ride from Boston to Waterford. Daytime DEAL’ model, Patricia Kara, stated last month, that the experience of shooting in Connecticut “is fun” and “like a college dormitory all the time!”.

Our second source also confirmed that it looks like the two models on the show will be hitting the pavement in search of their next big gig.

As always, we wish the cast and crew of DEAL OR NO DEAL much luck.