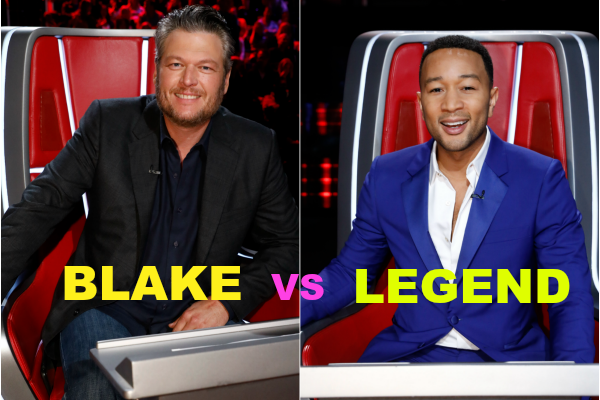 “The Voice” season 16 finale show on Monday night had the Top 4 artists: Maelyn Jarmon (Team Legend), Andrew Sevener, Gyth Rigdon, Dexter Roberts (Team Blake) perform duos with their coaches along with oringinal songs given to them. With the exception of Gyth Rigdon who had his own original song that he sang.

Closing out season 16, Tuesday Results show featured stellar performances from superstar artists and more duets from the artists who got to perform with some of these top-notch singers which ended with the crowing of a new “The Voice” winner.

MAELYN JARMON (Team Legend) Maelyn Jarmon from Team Legend was up first.  After her performance, Adam’s reaction was that Blake has three people out of four, “I love to hate on Blake, but his is NOT that moment.”  He thinks that Maelyn is the person “to be winning this thing.” stated Adam.  Legend said it’s a perfect song choice for her “it was flawless” and she performed it with so much energy.

DEXTER ROBERTS (Team Blake) Dexter is from Alabama.  Blake said the thing that struck him was Dexter’s ridiculous voice.  Dexter said he wanted to show America that he can sing more than Country when he sang Three Doors Down last week.  Dexter stated that it will take “something big” for him to win.  Blake said Dexter pours his heart and soul into it and this song gives him the opprotunity. He sang “Anything Goes.”  Dexter said he got thee chairs and hopefully this song wins him the show.  Blake compared him to Country star Ronnie Milsap.

Kelly said she loves him “in this vain.”  There’s not a lot of singers that sing like him that sound like Country.  Adam reacted that they all love him from the beginning.  “It doesn’t matter what kind of music you’re into,  greatness is greatness.”  Blake said that was the perfect song choice for you for this finale.  He pours his heart and soul into every performance and called him like “the next George Strait up there.”

GYTH RIGDON (Team Blake) Blake’s favorite thing about Gyth he sounds good and doesn’t sound like anybody else.  Blake and Gyth sang “Take it Easy.”

Kelly said it’s the line between old Country and new Country.  “It’s a really cool sound for you.  If you did it you should make more.”  John said he grew-up in Ohio and “I can relate to all this stuff,” he said.  Blake reacted that Andrew and him talked and said hoped he likes this song, “because you’re going to be singing if for the rest of your life.”

GYTH RIGDON (Team Blake) Gyth is from Lousiana from a small horse town.  Gyth said it’s hard to make dreams happen from a small town “but it’s not impossible.”   Blake’s first impression of Gyth was that he was desperate to get him on his Team because he thinks he can win.  Blake Blocked John Legend from Gyth in the Blinds. Gyth said Blake was his first concert.  Leaf Greenwood Tweeted Gyth on his performance last week.  This week, Gyth sang “Once in a Blue Moon” by Earl Thomas Conely.  The pressure was on to sing his coache’s idol’s song.   The singer passed away recenlty and Blake thinks the fan base will appreciate Gyth singing this song.  Blake said Gyth fits in with the new generation of Country artists whom he connects with and can definitly see him winning.

Kelly said it’s her favorite song and loves Earl Thomas Conely who’s a legend in Country music.  John said that song was really challenging and it was a really great performance.  Blake said he knows the Country music fanbase and Earl Thomas’ family is so proud that he did that song and honored him tonight.  They only lost him 4-5 weeks ago.  Blake finished, “way to honor a Country music hero.”

DEXTER ROBERTS (Team Blake) Dexter sang a brand new orginal song.  He said a long time ago he was going to give-up on music.  Dexter sang “Looking Back” song.   Blake said on an original song to make sure it lands directly in Dexter’s wheelhouse.  Blake predicted that Dexter’s going to be singing the song years to come.

After his performance, Dexter got a standing ovation from Kelly and Blake.  Kelly said she wanted him in the Blinds and she loves Dexter’s voice.  “I think you’re so so talented” and called him “authentic, not calculated,” stated Kelly. Who also added, “I think it will read through to the people in voting.”  Adam said it looks like he’s coming into his own at the perfect time and he’s “a solid human being” and “a fantastic artist.”  Blake said “I absolutely believe you’re 100 percent ready right now” to make an album with that song.  He said he’s the most ready out of everybody.

After the commercial break, the team from “Songland” came onto “The Voice” to promote their show which John Legend will be part of in the first episode.

ANDREW SEVENER (Team Blake) Blake said the first time he started singing, he felt like he knew Andrew. Blake said the cool thing is that Andrew knows what drives him.  He’s Rock/Country.  Blake said every song that Andrew does, pushes him just a little bit. Blake said people put him into the fianle because people bought into who he is.  This is his last time.  Blake loved the song choice which is rock, but leans Country.  He said he has a rock edge like Travis Tritt.   Andrew said he wanted to take a vunuerlable approach to the song.  Andrew said if Blake didn’t have the slightest belief in him, his life would be totally different.

Standing ovation from coaches.  Kelly screamed “that was so good…that was great!”  She finished that, that was her favorite from Andrew.  John said if he had to pick from Team Blake, he’d pick Andrew.  Blake told Andrew “this is your night…you’re killing it dude.”   Blake stated that Andrew is having “a break-out night” and what a perfect night for doing it.

GYTH RIGDON (Team Blake) Gyth had his personal debut song on “The Voice” stage that he wrote.  He said he’ll get to see the song “Proof I Always Loved You” come to life in front of 15 million people.  He believes everyone was born with a soul mate that they already love and that’s what his song is about.  He wrote it when him and his wife just began to date.  “Words just flew onto the paper,” said Gyth.  Blake said he’ll get it on iTunes.

Kelly said that’s just another layer to him as an artist and she’s excited for him.  “That’s a stellar moment to showcase it (songwriting).  Adam said Gyth really does have it all.  Said he was born to be here in this moment.  dam stated it’s evident that Gtyh is “a major contender” all the best to you.”  Coach Blake said it’s not just another LAYER, he added another level to the finale.  Gyth raised the bar…”Gyth wrote that song.  That was a great song  Your’e the total package.  You can win this thing,” Blake told Gyth.

MAELYN JARMON (Team Legend) John called Maelyn “pitch percise” more than any other singer on the show.  Daly cited the Cold Play song as Maelyn’s “crystalized moment.”  John said she puts her own spin on everything she does.  She sang “Hallelujah”  song to go against Team Blake.  Maelyn said the word “hallelujah” is also longing and regret.  Maelyn thought about when she was struggling playing bars in New York, working as a waitress to pay for a box to live in with roaches, she stated.  John said he knows what it’s like to be a struggling artist in New York. John said Maelyn was his first artist and thinks she’ll get first place in “The Voice.”

Adam called her performance insane and don’t know how its possible for her to NOT win the show. He called that song “unbelievable and she’s an angel from heaven.  John called it “stunning,” and her best performance yet. He described her performance as “transcording, transfixing, everything you want music to be.”

First-up was a performance from Team Blake’s Andrew Sevener. Blake explained that Andrew is always excited to be here. “Andrew literally says whatever comes to his mind,” and “Andrew is as Country as it gets” Blake described Andrew. Next, Mari and Kim Cherry performed a duet opening it up to past members of Team Kelly and Team Adam.

Will.i.am was interviewed briefly by Carson Daly about new songwriter show “Songland” which he’s the artist in the first episode. When asked about other people writing songs for him, Will.i.am said he likes to collaborate, “which is the best ping-pong session.” He called it the best show he’s seen in a long time. Will.i.am predicted that there may be a cross-over from “The Voice” artists.

OneRepublic performed “Rescue Me.” After the commercial break, Hootie & The Blowfish performed one of their popular songs from the 90s, “Let Her Cry.” Grammy award singer-songwriter Sarah McLachlan performed her famous hit “Angel” with Team Legend’s Maelyn Jarmon.

Maelyn said she’s grateful and didn’t know what it meant to choose John Legend as a coach. She said “it’s been a dream.” Maelyn stated that John always makes her feel validated. John said Maelyn makes him feel “at peace,” and “good God, she could win the show.”

BTS performed. Next, it was made clear that Dexter Roberts is from Alabama in his package with coach Blake who continually expressed his affections for Dexter. Then Dexter performed with Toby Keith.

Blake said “Gyth looks like a Country star.” Gyth joked that Blake might have a crush on him because he’s obsessed with his arms. In seriousness, Blake stated that Gyth takes this ‘Voice opportunity very seriously and added that Gyth is “very connected to the audience” and is a “powerhouse vocalist.” Gyth blended his vocals very well with Hootie and The Blowfish in their performance of “Hold My Hand” song. Then ten-time Grammy winner Taylor Swift performed her latest single with Brendon Urie from Panic at the Disco.

Finally, host Carson Daly brought out the four finalists to reveal the runners-up and the winner of season 16 of “The Voice.” Dexter told Blake that he’s thankful to have Blake as a coach and he’s “an awesome guy.” Andrew called Blake and amazing coach, musician and human being. Gyth said he now called Blake a friend and thanked him for welcoming them with open arms and for being a frined. Maelyn said she learns from every moment working with John Legend who’s a phenomenal musician and coach.

The finalist in fourth place was Andrew Sevener. The artist in third place was Dexter Roberts. Then it was between Maelyn and Gyth for the winner’s spot. Blake said they’re both incredible and “it calls for a drink!” “The Voice” season 16 winner is Maelyn Jarmon from Team Legend! She said she had no expectations going in. She thanked John for being “the best coach possible.