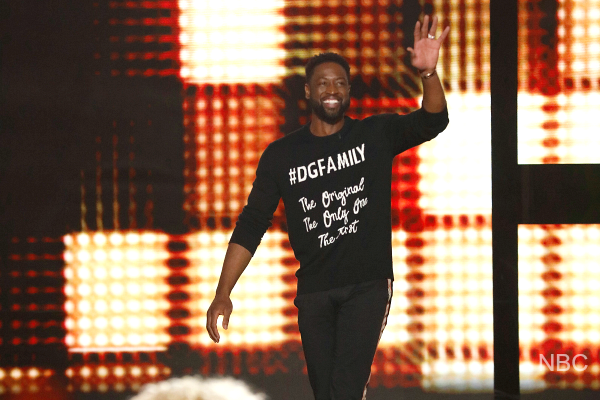 Hollywood Junket was on the set for a sneak-peek at this week’s AGT Judge Cuts and the below acts are the ones we saw.

First up was a shadow group act from Ukraine called “Verba Shadow” who utilized a split screen in their act.   Simon gave a standing ovation.  He said it was something he’d seen before last time that they were there.  This time, he loved it.  Guest judge Dwyane Wade reacted that he felt like he needed popcorn, 3D glasses and like he was cheating on his kids.  Simon said the story was good vs. evil in response to Howie who said he didn’t understand what it was about.  Simon said they’ll be fighting over them late deciding when they have to pick (who’ll make it through to the Live Shows). The group said they are the first to use a split screen. All the judges loved the split screen.  Simon said he didn’t get why the horse (Pegasus) was there then disappeared.  Gabrielle Union said it was a lot and maybe make it about less.  Pointing out that there was a wizard, an alien (so she thought), etc..

The next group was “GFORCE,” an all girl group that sings and dance from Toronto.  The group consists of five girls ranging in ages 10 – 12.  In their last AGT performance, Simon told them it was like someone wrote for them and not themselves.  One of the girls said they are their own boss and always have been.  Because of what Simon said last time, the girls performed their own original song titled “Simon Says.”   They were a lot like the Spice Girls.  Gabrielle said she’s the president of their fan club.   Simon loved it and told them to genuinely always stay true to themselves.  If someone on the show asks them to do something that isn’t true to their character, then don’t do it.  Dwyane said he knew they were going to “do it” when he saw how much confidence they had on stage.

Singer Lamont Landers performed next.  Unfortunately, he was faced with less than stellar comments from the judges. Julianne and Dwyane both said he reminded them of a bar singer.   Simon said he won’t fight for Lamont at the end.  Howie reacted that Lamont needed more dynamic and he should hope that his peers “crash and burn” because that’s the only way he’ll get one of the seven spots!  Julianne asked if he played with a band because she said he needed to fill the room more.  Lamont said yes he’s part of a band and intends to perform with them if he makes it through to return to AGT.

“V Unbeatable” is a high energy dance crew of 29 members mostly young men from Bombay, India.  Gabrielle said she was crying at times, she was happy, etc.. Dwyane said it was a roller coaster of emotion.  When he used to make a dunk he’d say “this is my house!”  He continued, “this is my house” then pushed the Golden Buzzer for them.   They explained that they were performing a dedication to their friend and former dance member Vikas who fell during a performance, got paralyzed, and passed away.  He was the one who brought them all together.  Simon told them they need them and hopefully we can do something for you.  Howie told them that they enriched their lives.

A four man dance group called “Adem Show” tried to impress the judges with costumes in a story-telling scenario which was a thief in a museum.   Howie said they look like the Mongolian Village People.  Simon responded to Howie that, that was funny.  Last time they were there they did a video game narrative. This time, it was a movie one.  One judge said it was like night at the museum.  Simon got booed when he tried to say that the show failed them because the stage and props looked like they’re worth $2. No props for the Prop Department!