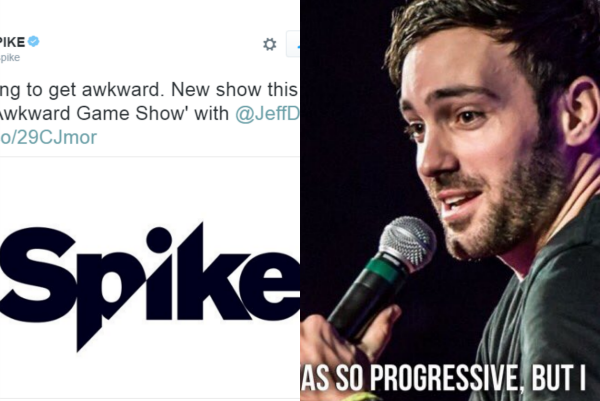 As earlier reported by “Deadline.com”, Spike TV is re-inventing the concept of traditional family game show with a format somewhat disturbing in “That Awkward Game Show” which forces embarrassing truths out of it’s contestant family members.

Hosted by comedian Jeff Dye (from “Last Comic Standing” fame). The show is set to premiere this coming October 12th. “That Awkward Game Show” format as explained by Spike is “As if having ‘the talk’ with your children wasn’t bad enough, imagine having to explain to your kid the details of the night they were conceived, or revealing to your parent that you secretly married the boyfriend they’ve never approved of. All of the skeletons are about to come out of the closet on That Awkward Game Show.”

Audience Member Says ‘Didn’t Enjoy It’ In This EXCLUSIVE SNEAK-PEEK!

“That Awkward Game Show” was being filmed for the last two weeks in Santa Clarita, Ca and just recently finished it’s last day filming yesterday, Saturday. In a recent reaction from an audience member, they stated that they “didn’t enjoy it,” and that it’s parents and their 29-something children guessing things about each other- embarrassing revelations, etc. One of the dads was kind of disturbing in his comments and stories, in my opinion. Another revealed that at one time he had been a pimp. ‘That’s entertainment! I call it ‘dysfunctional family feud'”.

Someone else who attended the show said “had fun on the day…and was glad, but my opinion was not shared by everyone.”

Varies audience member accounts also revealed that for the 200 of them, there were only four porta potties provided with everyone breaking at the same time. Yikes! According to Spike, each episode will feature three teams of two — each composed of one parent and one adult child — trying to figure out which embarrassing factoid is related to their teammate. Contestants will have to identify uncomfortable, often outrageous, previously unknown truths about their loved ones to advance throughout the game.