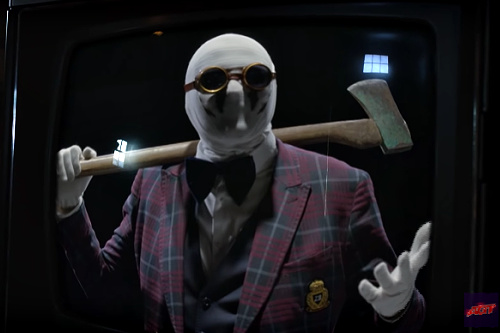 After getting caught in a worldwide pandemic at the end of the auditions last season, “America’s Got Talent” (AGT) returned June 1st, this year with top notch acts consisting of singers, dancers, comedians, magicians, danger acts, and mentalists,  along with some fun quirky ones many of which gained “yes” votes from the judges – Simon Cowell, Heidi Klum, Howie Mandel, and Sofia Vergara.

The talent show is an international sensation.  So, it’s not unusual to have acts cross continents and compete on other ‘Got Talent” shows.  Two acts this season so far were also competitors on “France’s Got Talent.”  They are both magic acts – Lea Kyle, and Klek Entos.

Both acts are stellar.  Klek Entos is a magician/mentalist shrouded in mystery.  His tricks lean a bit on the edgy side with horror undertones in the way he presents them.  Entos’ style can be described as if David Copperfield and Jigsaw (from SAW movie) had a baby.  If Entos, a second identity,  sticks around until the finale, viewers will get to see who he is if his acts parallel to the ones from his time on “France’s Got Talent.”

After the auditions, the next round is “Judge Cuts”.  This is where acts still have a chance to go straight to the Live Shows if they receive a Golden Buzzer from one of the celebrity guest judges.   The Live Shows are broken-up into the following stages:  The Quarter Finals,  The Semi Finals, and the Finals.

If Klek Entos succeeds in all rounds in AGT, we can expect to see similar, if not the same tricks he  showcased on “France’s Got Talent,” which ultimately ends with his unmasking.  (That may or may not happen in the American version being that he had a bigger reveal in France).  We’ll give you these hints, he is a well-known French actor and magician.    Though most of the online community has recently posted about it, we won’t give any spoilers here.

We were honored to have the chance to ask Klek Entos some questions about his act below. 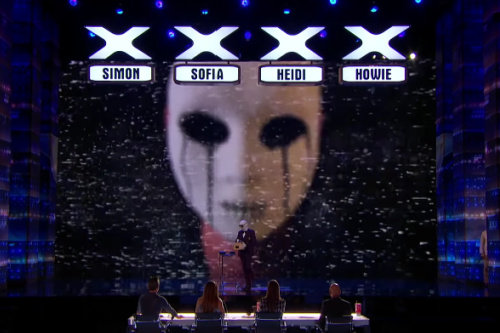 We saw Entos showcase mentalism which is when the performer influences someone or a number of people to give a certain reaction or a specific reply.  We were curious what percentage of Entos’ act is mentalism and what percentage is magic?   He replied:

ENTOS: It is up to you to define mentalism and magic. Everyone should draw their own conclusions. But, as you’ll see, it’s all a matter of faith.

Klek Entos gave Sofia Vergara a blank sheet of paper and told her to drop ink spots randomly on the paper.  He then created an inkblot image from it.  We asked, why did you choose the inkblot?   ENTOS: False. I did not pick the inkblot. It selected me. My name Klek is derived from the German word klecks, which means “drops.” Perhaps you’re curious about the shapes on my face? Everyone sees in them what they want to see or don’t want to see.

ENTOS:  Every drop of ink Sofia splattered on that piece of paper was haphazard and chaotic. Infinite interpretations could be made of that final image. Everyone visualizes it differently. Order emerges from chaos. Terry noticed a spider. What did you see? 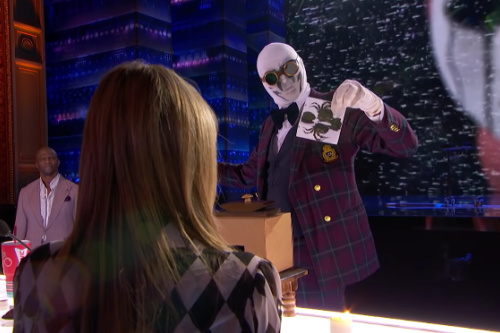 We were curious if this Klek Entos character is a stable for this magician or if he changes it up.  We asked,  the theme of your act consistent or will viewers of AGT see you next time with a different persona?  ENTOS:  It depends if I get angry.

How did it all start for you?  ENTOS: It all began when I got my hands on a 1584 edition of Discoverie of Witchcraft. Sir Reginald Scot penned this book. It contains the first piece of magic literature written in old English. This tome was not created to teach dark magic. Instead, it was a way to reassure the masses most magic performed by witches are clever feats of sleight of hand. People heard stories that made them want to believe. Do you want to believe?

When it was time to judge Klek Entos, most of the judges said “yes” because they were too scared to say “no.”  We asked, was it your intent to scare the judges? ENTOS: When faced with an unknown truth of life, it’s oftentimes scary.

How did you feel when they reacted that they’re too scared to say “no” to you?   ENTOS: The expression on my face spoke for itself.

Entos’ choice of weapon that he carries during his performance is an axe.  Why not a chainsaw, or some other weapon.  We asked, why do you choose to carry an axe?

ENTOS: This axe is a keepsake from my past. It reminds me of someone special. I bear it as if it were my cross. More gets revealed when the time is right.

When Klek Entos summoned the inkblot into reality, it was a tarantula inside of a cardboard box.  So, we asked –  Finally, I won’t ask what happened to the spider. But, did it leave with you?

ENTOS: If you’re still thinking about that spider, it’s likely that a piece of it is still with you. Inside of you. Aren’t minds powerful?