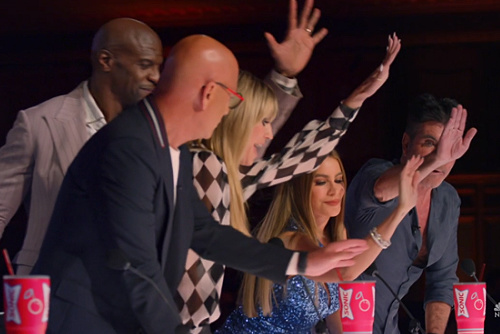 “America’s Got Talent” season 16 auditions week 6 got off to a great start when a birthday boy won the hearts of the judges and got four “yes” votes.  The bulk of this week’s acts were quirky, but some surprisingly weren’t too quirky not to get the judge’s votes.  One act won over Howie and Simon, but not the ladies – Heidi and Sofia who are usually the softy judges.

This episode finished with one contestant getting a very special gesture from all four judges and host Terry Crews.  Simon, who is not only a judge, but also the executive producer, asked them if they’d like to give the contestant a five handed Golden Buzzer at the same time.  Something never done before on the show.

Joel Claudio (a.k.a. “Twirl Act”) is 30 years old and was born in Puerto Rico.  Joel lives in North Carolina now.  He told the judges that it’s his birthday.  Joel said he always liked dancing and performing. He played in the drum line and the moment he saw the metal sticks, he thought they were really cool.  Joel said once he picked them up, he never put them down.  He said it’s been a dream to be on AGT since he saw the first winner Bianca Ryan in season one.  He can’t sing,  “the AGT stage gives all these variety acts a chance to show our talent,” said Joel.

Heidi said he could expand the act, and keep changing clothes during the act.  Simon was impressed and said Joel managed to raise the twirl stick higher than anyone else.  “You can just tell you’re a great person,” Simon told Joel.  Sofia said he made them feel so many emotions with twirling.  Howie called Joel “a one man parade” and he doesn’t need the floats or the marching bands.  Joel got four “yes” votes. 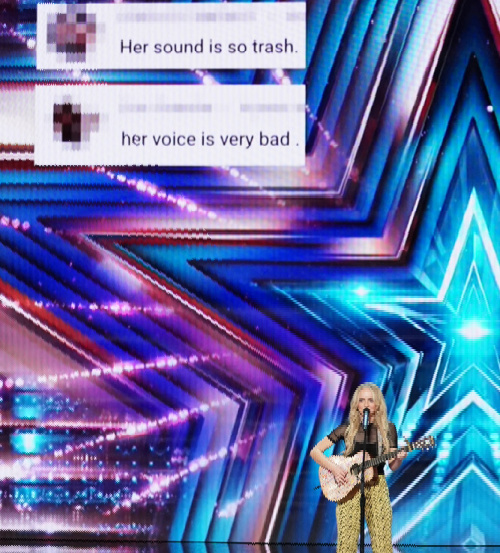 Madilyn performed an original song whose lyrics were made up of online troller comments.  Her voice was really good.  Heidi said she was “torn. It was so so.”  And it wasn’t “making me jump out of my seat.”   Sofia liked that “it was so unexpected” and “honest.”  Simon reacted “I never, never read this rubbish.”  He told her she’s a “great talent.”  Simon, Howie, voted “yes.” Howie told Heidi that the thing that she did before the act walked out was she turned off her comments.  Howie told her, “that’s kismet.”  On that note, Howie managed to get a “yes” out of Heidi. Sofia also voted “yes.”  Howie said he thinks she’s great!

Sofia said she thought they were having a great time and “it was really fun and I loved the music.”  Heidi loved the costume and the routine, “very good.”  Howie said they showed up to the audition like they were in a Semi Final or Final.  Simon said it’s one of the best dance acts they’ve seen.  “You always remember originality and people are going to remember this audition.”  He asked, “you think you’re going to win this?” They answered “yes.”   Simon said he “loves that!”  They got four “yes” votes. 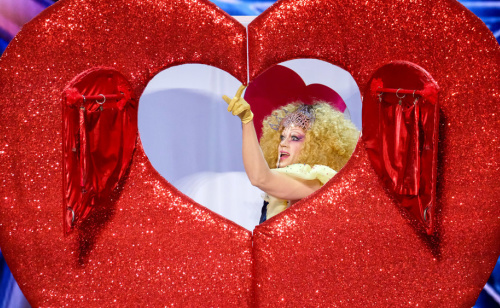 Darrell worked in Health Care for 15 years.  He said last  August, he was watching the AGT finale and told his parents that he needs to be there.  Howie reacted “wow, you saw the finale.  So you must think you can win?”  he answered “yes.”

“Slinky John” also thought he could win with his slinky act.  He got “yes” votes from three judges.

A dance duo, Roy and Judith, made up of a couple who are 62 and 96-years-old auditioned with an impressive dance routine.  They got four “yes” votes too.

Donovan told the judges that his dream is to be a Broadway performer.   When Donovan started singing and sounded like a woman, Simon reacted to Sofia “that’s unique.”  After his audition, Simon told Donovan “we were NOT expecting that.”  Sofia said she loves surprises and it was unexpected and “really different.”  Heidi said she loves Broadway too and she loved it.  Howie also loved Donovan’s audition.  Simon said if someone was really smart, that would put him in the right part, right musical.  Simon also added, “you have an amazing voice…you did the right thing coming onto here.”  He got all “yes” votes.

There was a superhero audition, “The Stunner ” who did multiple dance moves, including Flossing.  Simon said “well, it was dreadful,”  Sofia said she thought it was a superhero, because it was super hard to do.  Howie said he didn’t like it.  Simon and Howie voted “no.”  Sofia and Heidi voted “yes.”  Sofia told Howie that “that’s an extremely difficult dance!” Howie said yes, in 1980!

Next was a Wizard/angel act that played the trumpet.  The best part of the act was not the music, but when the trumpet also had wings and flew around the stage.  Simon actually gave him a standing ovation.  Heidi and Sofia gave him “X’s.”  Heidi said “you’ve seen it once, you don’t need to see it again.”   Howie also liked it, “this is the year of uniqueness.  This is fun to watch.”  Simon loved being the nice guy against Heidi and Sofia.  Then the audience shouted, “Put Him Through!!”  Simon urged for Sofia or Heidi to change their vote.  The ladies did not.  Simon reacted to the ladies “you said ‘no’ to an angel with flying trumpets!”

Matt is 51 years old.  He said he’s on AGT because his wife and him are both school teachers.  He explained that on January 26, 2020 he lost his wife in the same helicopter crash that killed Kobe Bryant.  He said they met in 2004.  They talked about music.  They were married for 15 years and had 3 children.  He said when she left that day, she told him she loved him and that was the last thing she said to him.  Matt said his focus immediately went to their children. “She would want me to carry on, and she would want them to have happy lives.”   Matt said “it’s been a rough year.  But, here I am.”  He brought his kids on stage before his audition.

Matt sang “Against All Odds” by Phil Collins.  It seemed obvious that he dedicated the song to his wife.  Matt teared-up at the end.  Howie said “we felt your emotion.. if you’re able to move strangers.”  He added, “there aren’t words to describe it.”  Heidi said when he sang it, “it went inside  of me” and called it “very special.”  Sofia said it was “emotional” and “touching.” She thanked him for being there. Simon asked what would happen if he won the show?  Matt said he hadn’t thought that far down the line.  Then said he’d like his children to see that the grief does not define who they are.  He said if it inspires his children to chase their dreams, “I’ll take it.”  Howie told Matt that he is his wife’s legacy.  They all voted “yes.”

Chief said he’s in his early 20’s and a comedian.  It was his first time performing.  They were his first audience ever!  Chief proceeded to do his stand-up act behind a mask.  The judges couldn’t understand what he was saying and buzzed him off the stage. 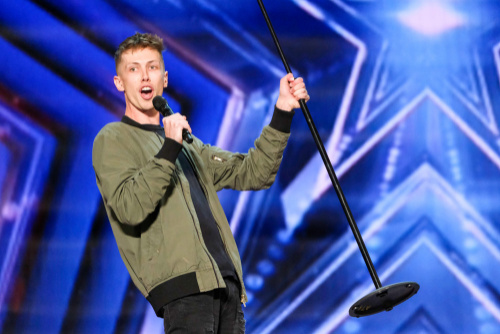 He’s been doing stand-up for eight years.  It started when he’d stay up late as a kid to watch comedy shows.  After Cam’s audition, Sofia said she felt Heidi laughing and she paid more attention to him.  Heidi said she laughed the whole time. Which is unusual for Heidi because she’s usually tough on comedians.

Howie said Cam only had 90 seconds, and each story was “kind of the same.” But, he thought he was really good and said Cam has a future in comedy.  Simon asked Cam how much experience he has? Cam answered that he gets on stage every night.  Simon reacted that  he was impressed and he liked him.  Simon said he thinks the audience will like Cam as well.  Cam got four “yes” votes.
@CamTheComic

Breeze told the judges that she just turned 13-years old. She said she was shy and would always hide behind her mom.   She referred to her parents, who came out on stage briefly to meet the judges.  Breeze credited her parents for enrolling her into dance classes because they thought dancing would be good for her confidence.  She said they were right and she “loves it.”  Breeze danced Contemporary to Kelly Clarkson’s “Piece by Piece.”

Sofia told Breeze that “it was perfection” and “can see the future opening up for you.”  Heidi told her “we see a lot of dancers.  A lot of kid dancers.  But, you are really special.”  Howie said America will love her and she’s going to “do great in this competition.”  Simon told Breeze that she has a glow about her and is instantly likeable.  She got four “yes” votes.

“Vertical Show”  have “strength and uniqueness” they told the judges which is why they think they can win.  The act was multiples of them around poles. Another act was MJ who was a hula hoop artist.  Next, was a trio dance act with women called “Femme Fatale” who were popping and locking.  They got four “yes” votes. 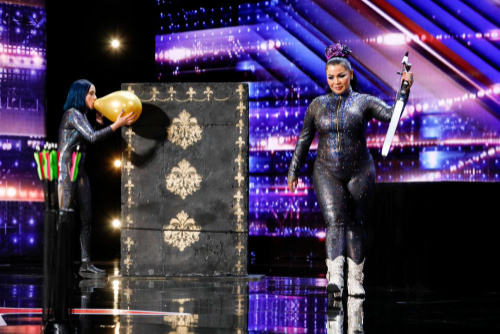 The mom called her daughter her “human target.”Her ex-husband is an ER doctor (conveniently).  She said when they first performed in front of him, he waited in the car in case something bad happened.

Simon called it “one of the nuttiest acts I’ve ever seen.” But, he still “loved it,”  Sofia thought it was “super different” that they were mother and daughter. “I thought it was a lot of fun.”  Heidi said she’s surprised that she didn’t get asked to be up there.  Howie was honest and said “it didn’t have the energy.”  It was a “no” from Howie.  Simon advised them to “put on a better show.’  He still gave them a “yes” vote.

They are from different backgrounds and are best friends. They said “this is the biggest performance” of their lives.  They came from Mexico City and Gaudalajara,  They told the judges they’ve been together for one year and met in dance school.  They explained that they’ll do what Chara does.

Sofia said “I think already you’re going to have to yes’s” Simon was slightly confused because they saw three acts in one (referring to when they sang).  They said they want to go to Las Vegas with their show.  All the judges gave them “yes” votes.

Victory is a nine-year-old singer.  Her mother said she sings morning, noon and night.  She thinks she can win the whole show.  She told the judges that she was “nes nervous.”  She would buy Simon a rainbow shirt that has glitter on it if she won the million dollars.
After Victory’s amazing audition, a bird that was in the auditorium flew and sat by the stage. Heidi told Victory that it was a sign.  Simon told Victory that it’s important to really “show up in your career.”  And she did that!  Then, he called host Terry Crews over to the judge’s panel to ask him if he and the other judges would like to do something different.  They all decided to in unison, give Victory a multiple Golden Buzzer from all of them! 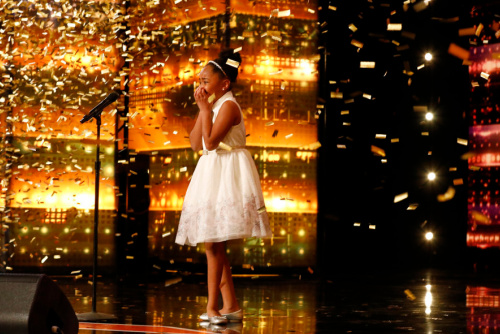